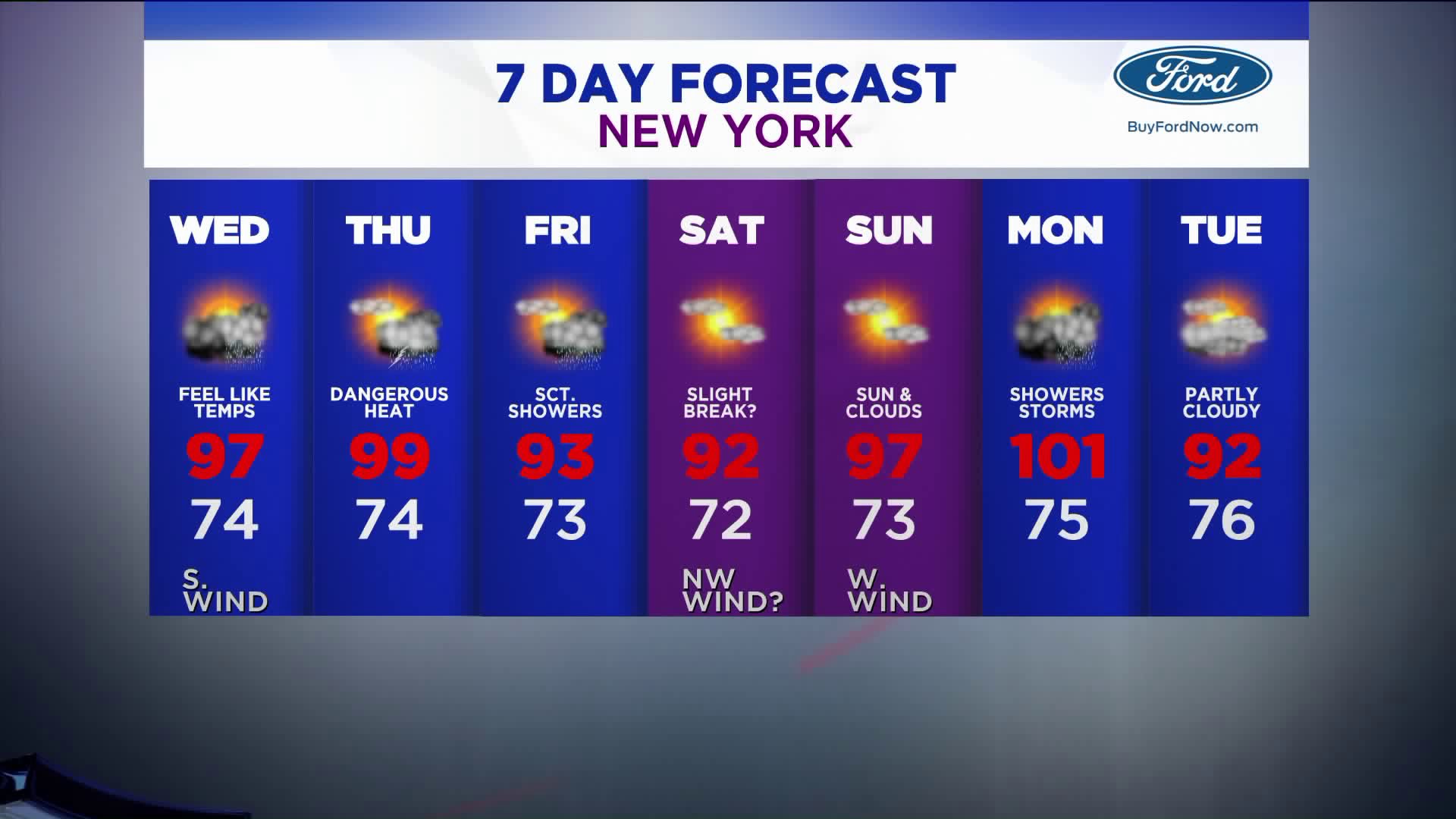 A stationary front will drift closer to the area Wednesday, bringing showers and thunderstorms as well as more heat and humidity. A Heat Advisory is in effect today for central and southern New Jersey. We can expect partly sunny skies this afternoon with showers and strong thunderstorms developing this evening. Temperatures will once again reach the 90 degree mark in Central Park with heat index temperatures in the mid-90s.

NEW YORK — A warm front will lift through the region and bring back not just the humidity Wednesday, but also the risk of strong to severe thunderstorms.

A Heat Advisory has been issued for central and southern New Jersey as it may feel closer to 100 degrees before the threat for thunderstorms arrives in the evening.

Several severe weather warnings have been issued related to storms in the area.

Parts of the Jersey Shore are under a Severe Thunderstorm Warning until 7:45 p.m.

A Flash Flood Warning was issued for Hudson, Essex and Union counties until 8:45 p.m.

Wind gusts of 70 mph and hail the size of a half dollar are possible, according to the National Weather Service.

Wednesday will be a hot and uncomfortable day as temperatures are expected to once again climb beyond 90 degrees in the city, the higher levels of humidity making it feel more like the mid 90s.

It will be very tough in New Jersey as heat indices approach 100 degrees for some areas.

We can expect partly sunny skies Wednesday afternoon before scattered showers and thunderstorms develop by the evening. The main threat that these storms could produce will be damaging winds, but the risk of hail and even a tornado cannot be ruled out.

These storms should diminish Wednesday night, but the risk may return on Thursday afternoon as the trailing cold front will slowly cross through the region. Again it will another hot and humid day with temperatures around 90 and the heat index climbing to the mid 90s.

The heat and humidity should ease off by Friday as an area of high pressure slides into the region. It will stay warm as temperatures top out in the upper 80s.

Expect more of the same on Saturday with highs in the upper 80s, but the heat should make a return for the latter part of the weekend. Southwesterly winds will bring temperatures back up to around 90 for Sunday.