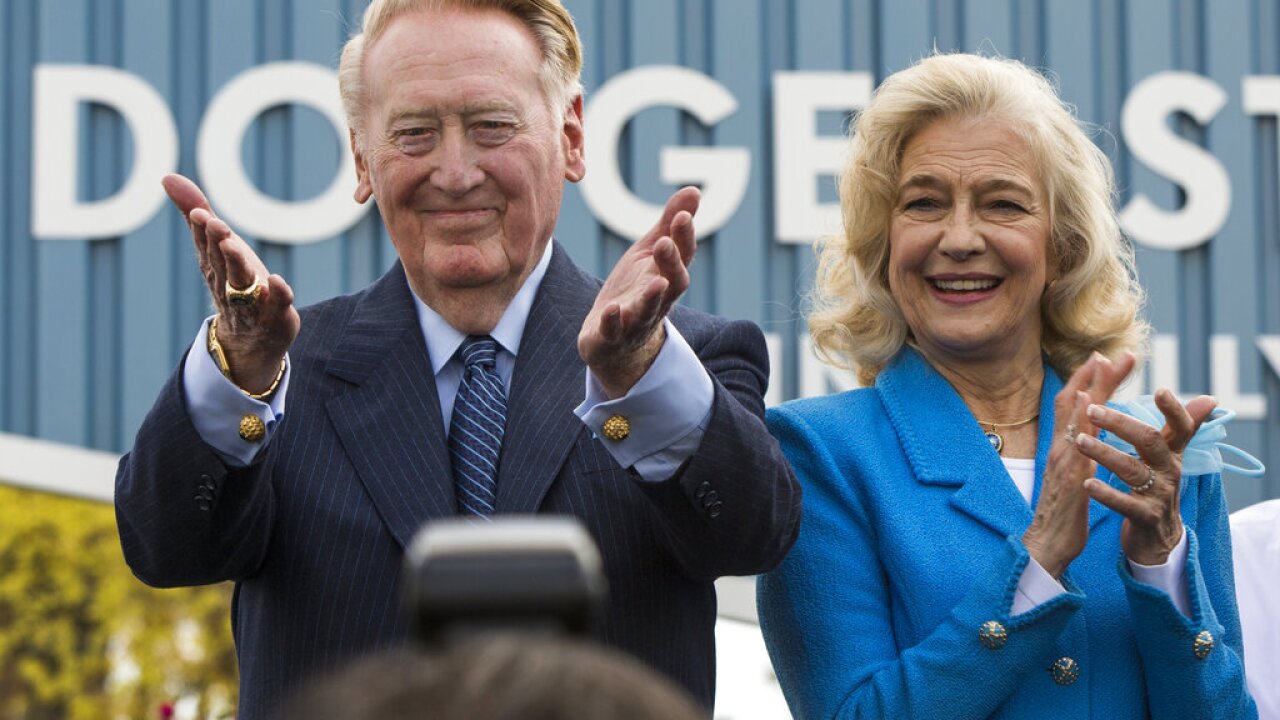 Damian Dovarganes/AP
FILE - In this Monday, April 11, 2016, file photo, Los Angeles Dodgers legend Vin Scully, left, with his wife, Sandra Scully, thanks Dodgers' fans at a dedication ceremony unveiling a street sign of his namesake at the entrance to Dodger Stadium in Los Angeles. The wife of Hall of Fame announcer Vin Scully has died. The Los Angeles Dodgers say Sandra Scully died Sunday, Jan. 3, 2021, at age 76. She had been dealing with the neuromuscular disease ALS over the last several years and died at Ronald Reagan UCLA Medical Center in Los Angeles. She and Vin Scully celebrated their 47th wedding anniversary in 2020. (AP Photo/Damian Dovarganes, File)

She had been dealing with the neuromuscular disease ALS over the last several years and died at Ronald Reagan UCLA Medical Center in Los Angeles.

Vin told The Associated Press last August that he found it “ironic” that his wife had the same condition as Lou Gehrig, which ALS is also known as.

Gehrig was forced to retire from the New York Yankees in 1939 because of the disease.

This is no cure.

Last September, Vin raised $2 million auctioning off years of his personal memorabilia. The Scully's then donated a portion of the money to UCLA for ALS research, the AP reported.

She and Vin Scully celebrated their 47th wedding anniversary in 2020.

Sandra Scully was a frequent companion to her husband in his final years as Dodgers announcer.

The couple had one daughter, Catherine.

Sandra Scully was stepmother to her husband's three children from his first marriage. His first wife died of an accidental overdose in 1972, the AP reported.