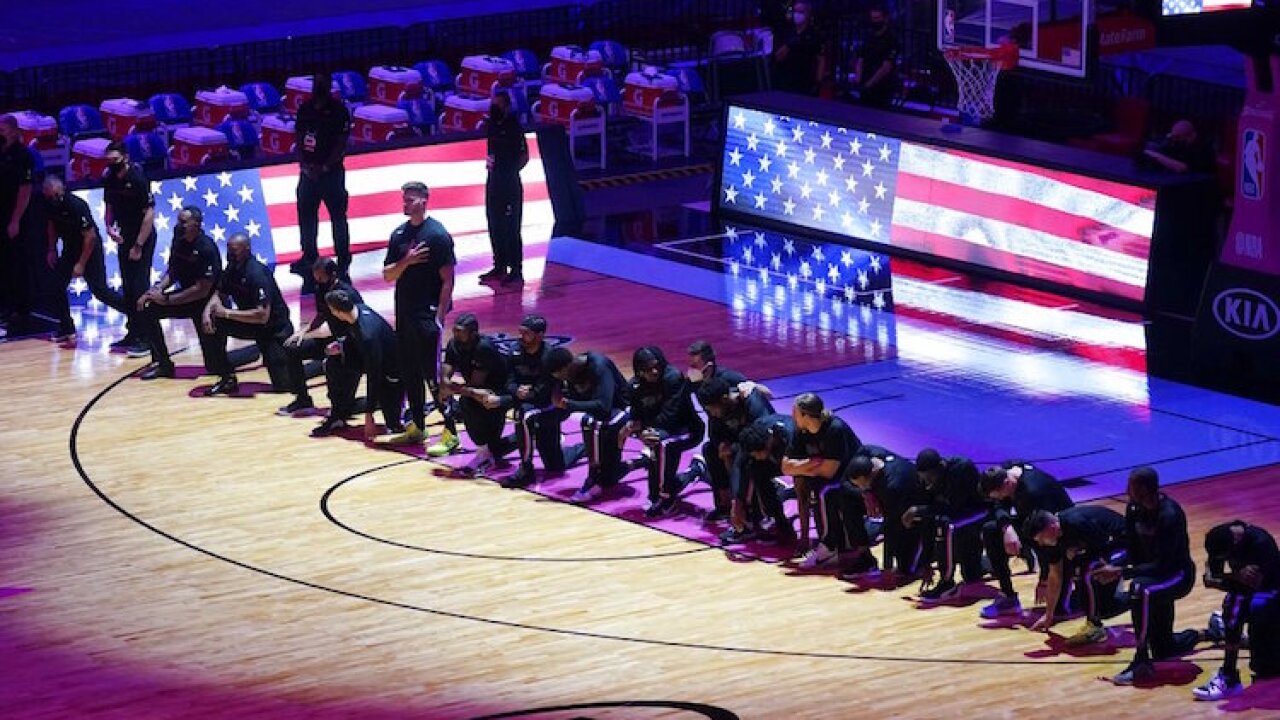 Marta Lavandier/AP
The Boston Celtics team kneels during the playing of the National Anthem before the first half of an NBA basketball game against the Miami Heat, Wednesday, Jan. 6, 2021, in Miami. (AP Photo/Marta Lavandier)

MIAMI (AP) — The Boston Celtics and Miami Heat knelt for the national anthem Wednesday night, saying they were playing "with a heavy heart" after a violent mob loyal to President Donald Trump was able to storm the U.S. Capitol and a Wisconsin prosecutor's decision this week to not charge a police officer who shot a Black man last year.

Wednesday's scene from the Capitol, where a mob delayed Congress from certifying the results of November's election and paving the way for President-elect Joe Biden to be sworn in later this month, was widely discussed around the NBA before games began.

Both teams walked off the court together during pregame warmups and just before tipoff, both groups released a joint statement:

“2021 is a new year, but some things have not changed. We play tonight’s game with a heavy heart after yesterday’s decision in Kenosha, and knowing that protesters in our nation’s capital are treated differently by political leaders depending on what side of certain issues they are on. The drastic difference between the way protesters this past spring and summer were treated and the encouragement given to today’s protestors who acted illegally just shows how much more work we have to do. We have decided to play tonight’s game to try to bring joy into people’s lives. But we must not forget the injustices in our society, and we will continue to use our voices and our platform to highlight these issues and do everything we can to work for a more equal and just America.”

According to WBZ4, Celtics head coach Brad Stevens said before the game an interview with media members said he was sad for what transpired today in the nation's capital. Still, he's hopeful of a "better future come inauguration day."

It is unknown if the NBA will penalize the Heat and Celtics for kneeling, The Associated Press reported.

Meanwhile, an Athletic 10 Conference basketball game was postponed Wednesday due to a city curfew set in place by DC Mayor Muriel Bowser after protestors stormed the U.S. Capitol building.

In a statement, UMass said the league would reschedule their game against George Washington.