A University of Cambridge graduate was killed in the deadly stabbing near London Bridge, reports say 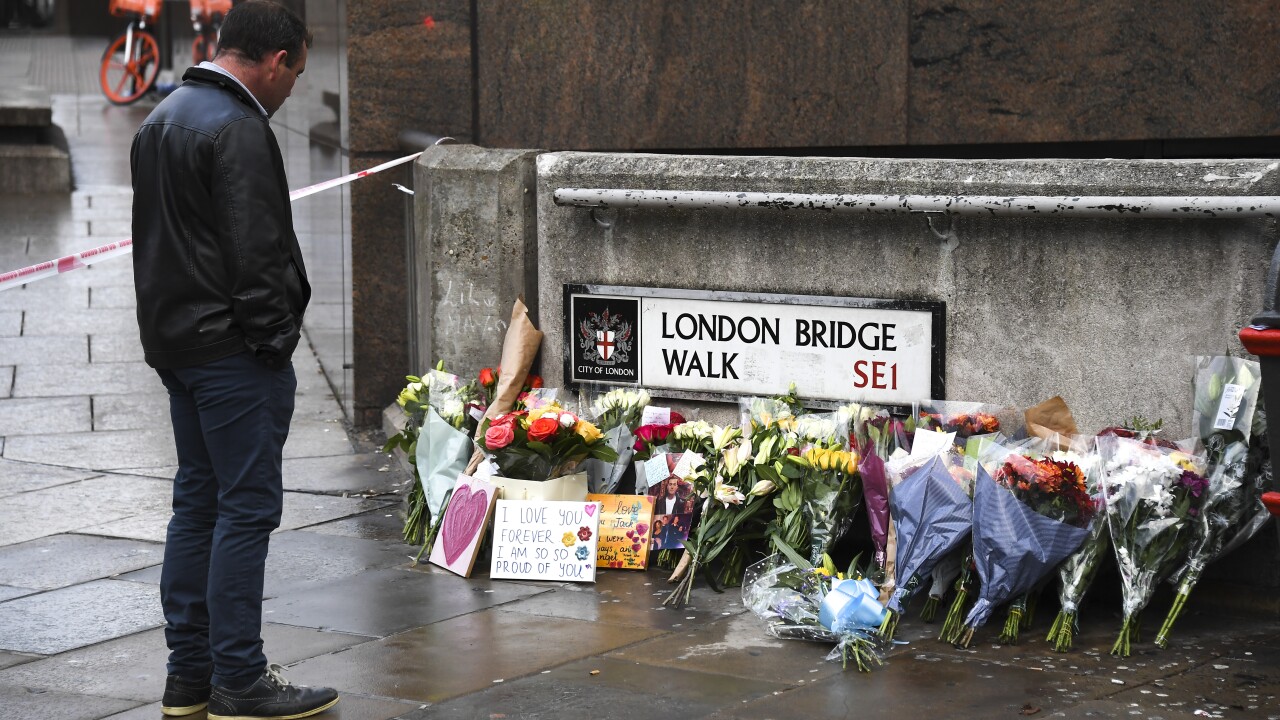 A University of Cambridge graduate has been identified as one of the victims killed in a terror attack near London Bridge, British media reported.

Jack Merritt, 25, worked as a course coordinator for Learning Together, a group linked to the University of Cambridge hosting the event at Fishmonger's Hall where the attack began.

Authorities have not officially confirmed the names of the victims pending formal identification from the coroner, Metropolitan Police Assistant Commissioner Neil Basu said.

"You were a beautiful spirit who always took the side of the underdog," David Merritt wrote. He has since then deleted the message.

Friends of Merritt took on social media to mourn him, describing him as a caring young man, who was committed to social justice and equality, and who worked for a better justice system.

Merritt and a woman, who has not been named by authorities, were fatally stabbed by Usman Khan on Friday, police say.

Three others, a man and two women, were wounded in the attack and were still hospitalized on Saturday.

Khan had been attending an event for alumni celebrating the five-year anniversary of Learning Together, police said. The group, a network of academics and criminal justice organizations, is affiliated with the University of Cambridge's Institute of Criminology, the website for the event said.

He was shot dead by police after he left the building and went onto the bridge, where a group of bystanders tackled him to the ground on the north side of London Bridge.

The attacker was confronted by several people who sprayed liquid from a fire extinguisher and wielded an apparent narwhal tusk that was taken off the Fishmonger's Hall.

The British Transport Police confirmed on Saturday that one of the bystanders was a plain clothes officer. They said the officer disarmed Khan of one of two knives he is believed to have had strapped onto his hand.

London Mayor Sadiq Khan said the group used anything they could find to stop the attacker from harming others.

"And I think what we should do is reflect on the fact that these people ignored all the advice they're given, which is to run away from danger, to look after your own safety. And instead ran towards danger to make sure others were safe. And I'm just so incredibly proud as the mayor, and I think all of us should be proud of our fellow citizens," the mayor told reporters on Saturday.

They mayor said a Londoner of Polish origin was among the group of people who intervened.

"We saw yesterday one example of the worst of humanity -- the actions of this terrorist," Sadiq Khan said. "But we saw many examples of the best of humanity. And when I say the best of us, I include EU citizens. And what we saw yesterday was ordinary citizens, including Londoners who are of Polish origin -- he's a Londoner -- who acted in an extraordinary way. And I'm pretty proud of him."

The issue has turned into a political football in the run-up to the December 12 general election. Both the main party leaders accused previous governments for failures in the justice system.

UK Prime Minister Boris Johnson, who served as foreign secretary in the last Conservative government, said Sunday that it was "repulsive" that attacker Khan was out on early release after being convicted of terror offenses.

Speaking on the BBC's Andrew Marr show, Johnson said: "I deplore the fact that this man was out on the streets."

When Labour leader Jeremy Corbyn was asked Sunday if he thought convicted terrorists should serve their full sentence on broadcaster, he said "not necessarily" and "it depends on the circumstances."

He told Sky's political show Sophy Ridge that an examination was needed of "how our prison services work and crucially on what happens when they're released from prison," noting that no probation service was involved in monitoring "this sort of person."

Corbyn added that "prison ought to be a place where people are being put away... but also a place where rehabilitation takes place" saying there was a need to "properly fund the prison service."

Khan had been released from prison last year with an ankle monitor after serving a less than half of a 16-year sentence.

In 2010, he was among a group arrested in London over an "al Qaeda-inspired plot" and was accused of planning to open a terrorist military training facility under the guise of a madrassa, or educational institution, on land in Kashmir that was owned by his family, court documents said.

Khan pleaded guilty in 2012 to the charges. He was sentenced to 16 years in prison for his role but was released in December 2018.

The sentencing judge called Khan and two others "more serious jihadis" than the rest of their group, adding that in his view they would remain a "significant risk" to the public, even after their sentence.

In order to adequately protect "the safety of the public," the judge said Khan's release on license could only be "decided upon, at the earliest, at the conclusion of the minimum term" in prison, and imposed an indeterminate sentence on his release.

Britain's Parole Board said in a statement on Saturday that he appeared "to have been released automatically on license," without a parole hearing.