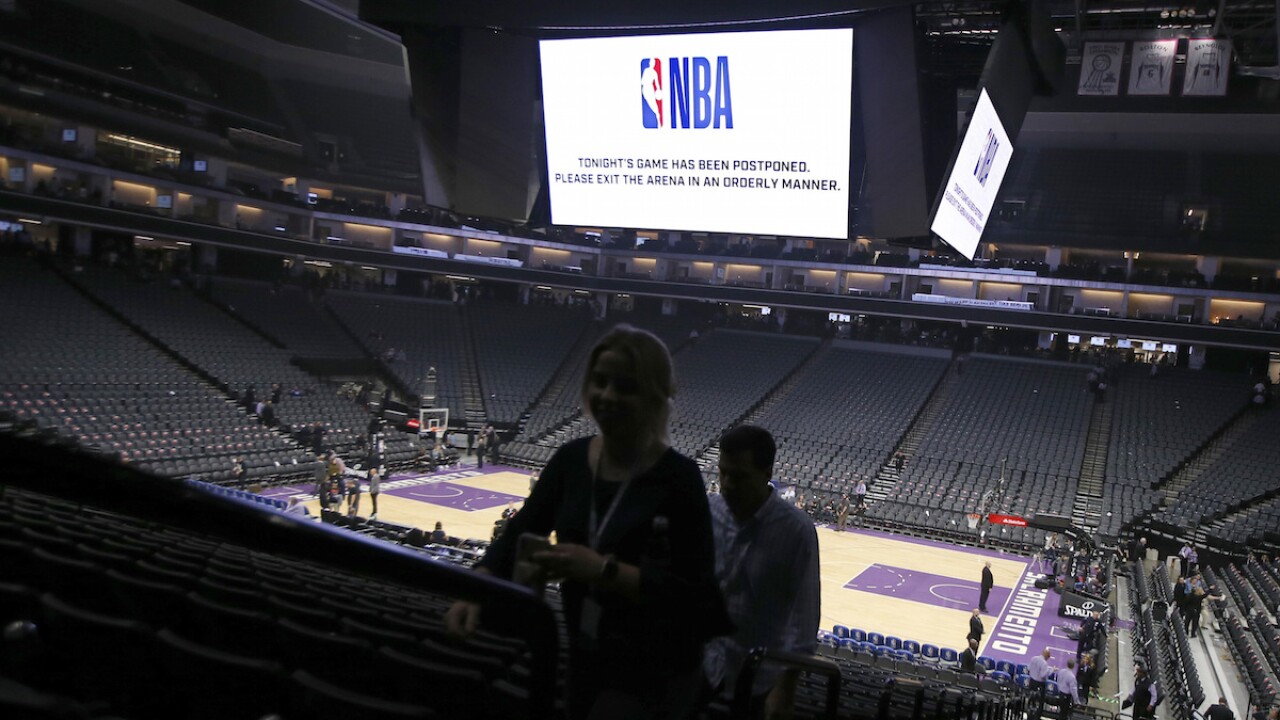 Copyright 2020 The Associated Press. All rights reserved
Rich Pedroncelli/AP
Fans leave the Golden 1 Center after the NBA basketball game between the New Orleans Pelicans and Sacramento Kings was postponed at the last minute in Sacramento, Calif., Wednesday, March 11, 2020. The league said the decision was made out of an “abundance of caution,’ because official Courtney Kirkland, who was scheduled to work the game, had worked the Utah Jazz game earlier in the week. A player for the Jazz tested positive for COVID-19.(AP Photo/Rich Pedroncelli)

With the NBA planning to resume play late next month, the league said on Friday that after testing 302 players for the coronavirus on June 23, 16 players tested positive.

The league did not say which players had tested positive for the virus, but those players will remain in self-isolation until they satisfy public health protocols for discontinuing isolation and has been cleared by a physician.

Meanwhile, the league is moving forward with a planned relaunch on July 30, with 22 teams of the league’s 30 teams participating in the conclusion of the season and subsequent postseason based at Orlando’s Wide World of Sports. Fans will not be allowed to watch in person.

The league also announced that the 2020-21 season will begin on December 1.

The league suspended play on March 11 when Utah Jazz star Rudy Gobert tested positive for COVID-19 moments before tipoff in a game against the Oklahoma City Thunder. Several games were allowed to conclude that evening, but the NBA has not held a game since.

“We have worked together with the Players Association to establish a restart plan that prioritizes health and safety, preserves competitive fairness and provides a platform to address social justice issues,” said NBA Commissioner Adam Silver. “We are grateful to our longtime collaborator Disney for its role in playing host and making this return to play possible, and we also thank the public health officials and infectious disease specialists who helped guide the creation of comprehensive medical protocols and protections.”

The league said on Friday that the league and its players’ association have completed a comprehensive plan for the remainder of the season.

The NBA said the 22 participating teams will be the eight teams in each conference with the highest current winning percentages and the six teams that are currently within six games of the eighth seed in either conference. The teams will play eight games each to determine seeding. Schedules for those games will be released tonight, the NBA said.

Following the conclusion of the season, this is how the NBA says the postseason will be determined:

If the team with the eighth-best combined winning percentage in a conference (Team 8) is four games or fewer ahead of the team with the ninth-best combined winning percentage in the same conference (Team 9), then those two teams would compete in a play-in tournament to determine the eighth playoff seed in the conference. The play-in tournament will be double elimination for Team 8 and single elimination for Team 9.

The NBA’s standard playoff tiebreaker procedures will be used to break any ties on the basis of winning percentage. Once the 16-team playoff field is set, the NBA Playoffs will proceed in a traditional conference-based format with four rounds and best-of-seven series in each round. The 2020 NBA Finals will end no later than Oct. 13.