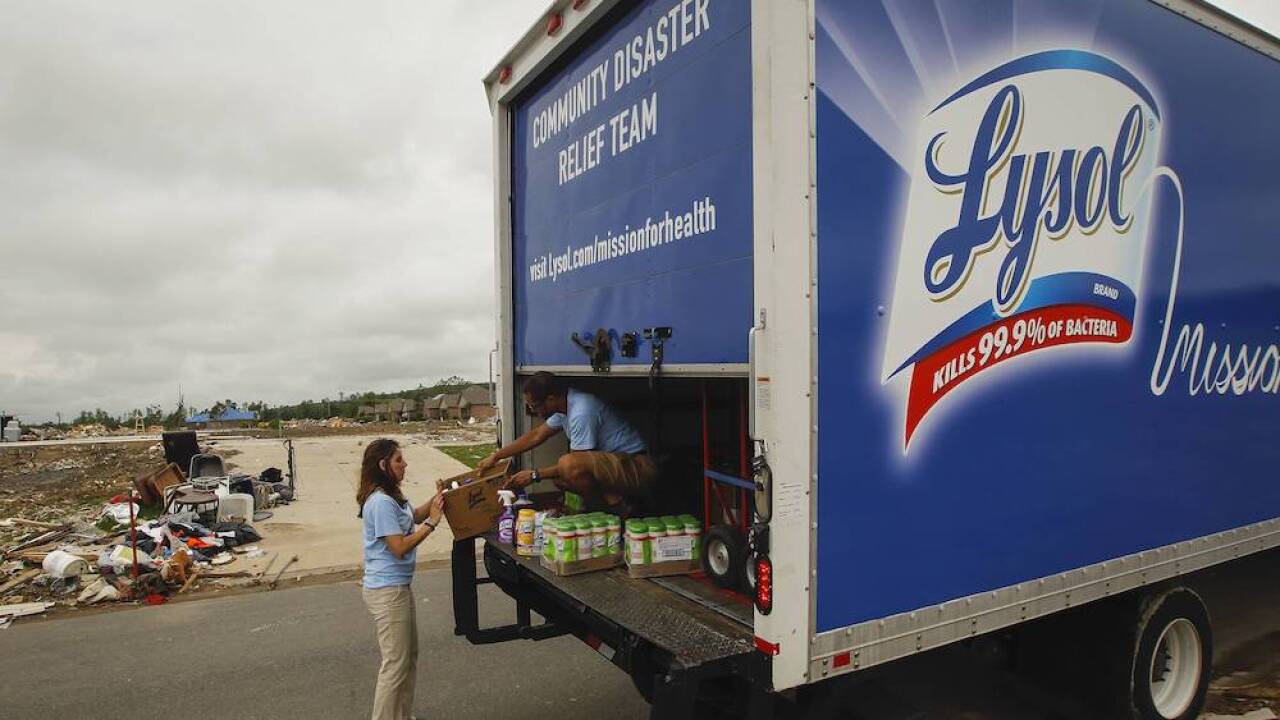 Invision
Lance Murphey/Invision for Lysol
IMAGE DISTRIBUTED FOR LYSOL -Sarah Patterson and Walter Wiggins, III, of the Lysol Community Disaster Relief Team visit the Parkwood Meadows subdivision in Vilonia, Ark., on Wednesday, May 28, 2014. A tornado devastated Vilonia and a wide section of Central Arkansas on April 27. (Photo by Lance Murphey/Invision for Lysol/AP Images)

The parent company of Lysol warns that disinfectants should not be ingested or injected into the body despite comments from President Donald Trump during a White House briefing on Thursday.

During the briefing, Trump said he thought it would be "interesting" if scientists could investigate a way to "inject" disinfectant into the human body in the hopes of "knocking out" the coronavirus.

"I see the disinfectant that knocks it out in a minute, one minute. And is there a way we can do something like that by injection inside or almost a cleaning? As you see, it gets in the lungs, it does a tremendous number on the lungs, so it would be interesting to check that," Trump said.

However, Reckitt Benckiser — the U.K.-based parent company of Lysol — clarified in a statement on its website that no one should be putting its cleaners in their body.

"As a global leader in health and hygiene products, we must be clear that under no circumstance should our disinfectant products be administered into the human body (through injection, ingestion or any other route)," the company said in a statement . "We have a responsibility in providing consumers with access to accurate, up-to-date information as advised by leading public health experts."

Dr. Stephen Hahn, the director of the FDA — an agency run by the Trump administration — pushed back on the president's claims on Thursday evening.

"We certainly wouldn't want, as a physician, someone to take matters into their own hands," Hahn said in an appearance on CNN. "I think this is something a patient would want to talk to their physician about, and no, I certainly wouldn't recommend the internal ingestion of a disinfectant."

During his briefing, Trump also suggested that ultraviolet light could kill the virus. Dr. Deborah Birx, the response coordinator for the White House's coronavirus task force, was later asked about that course of treatment during Thursday's briefing and said she was not aware that light could be used as a COVID-19 treatment.

"Not as a treatment," Birx said. "I mean, certainly fever is a good thing. When you have a fever, it helps your body respond." Trump then quickly cut Birx's answer off.