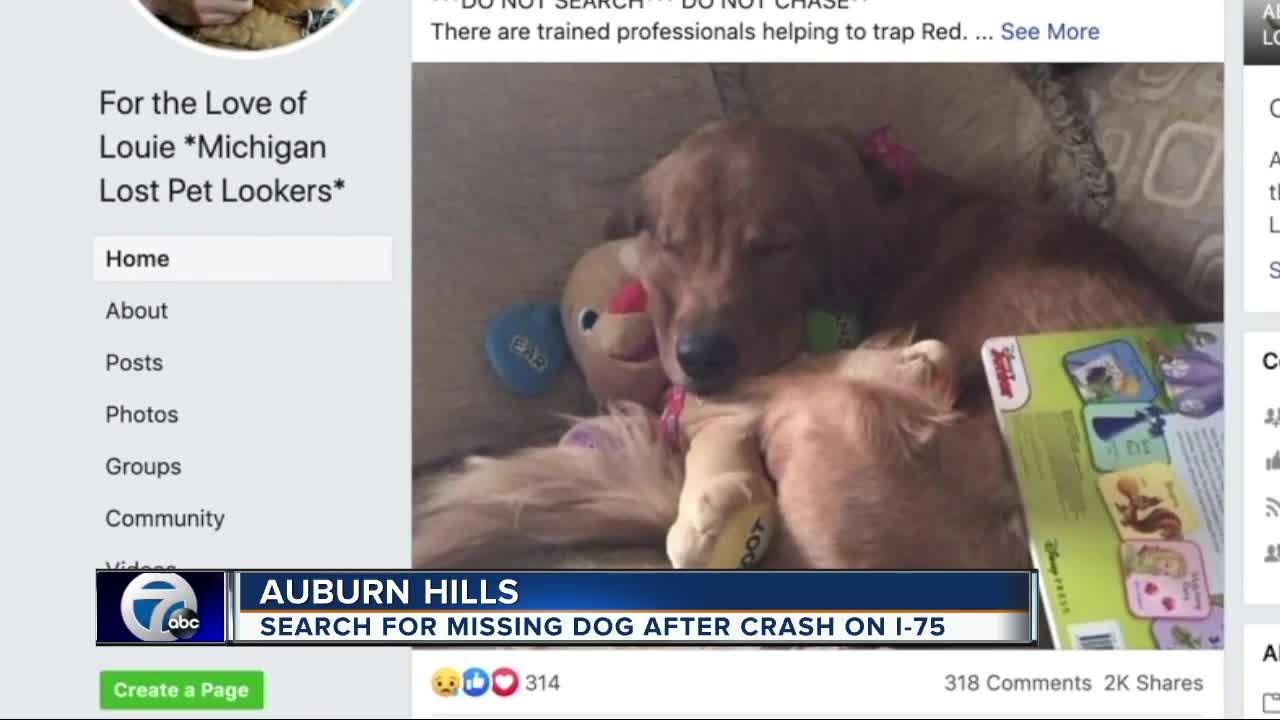 A Woodhaven family's golden retriever, ejected from their car during a rollover crash Sunday morning, is still missing.

A Woodhaven, Michigan, family's golden retriever, ejected from their car during a rollover crash Sunday morning, is still missing.

The Stevensons were traveling to Mayville to visit family Christmas morning just before 10 when they struck a slick spot on I-75 and flipped over several times.

Wade Stevenson, Ruth Stevenson, and their 4-year-old daughter Hazel were not hurt. However, the family's dog, named Red, took off after the crash and ran into a wooded area near the freeway.

“Just a couple scratches to honest. Even the Christmas presents didn’t get scratched. I don’t understand," said Wade Stevenson.

Auburn Hills Police, animal control, and dozens of volunteers are looking for Red, who's been spotted several times in a business park a couple miles from the crash site, near Harmon Road and Atlantic Boulevard.

Red is not answering to his name when his owners call for him. Police are asking volunteers not to call out for the dog, as he's easily spooked.

The 1-year-old golden retriever does not bite and has had all of his shots.

An animal advocate and expert is setting up live traps to help lure Red home. He’s using food and a scent from Red’s owners. DO NOT APPROACH traps, as it may scare Red away. Traps will not harm the dog @wxyzdetroit @AHPOLICE pic.twitter.com/mW8W4IhV57

“Right now we’re getting reports along I-75, the dog’s running in ditches, up along Harmon Road over to Lapeer Road," said Lt. Ryan Gangnon with Auburn Hills Police. "So right now people are just pushing the animal in different directions."

Three live traps, which do not hurt the dog, have been set up in the area with food and articles of clothing from Red's home to lure him to safety.

The biggest concern right now is that Red will run into traffic or onto I-75. He's been seen in a ditch along the freeway but so far, not on the road itself

“We’re just hoping with the scent and the food together it will actually draw him in," said Michael James with animal advocacy group Pro-Pet-Otic Foundation of the live traps he set up.

The community response started almost immediately after the crash, when the family posted to social media looking for Red.

“It opens your eyes to how many people actually do care," Ruth Stevenson told Action News.