Missed Biden, Sanders on Sunday's Democratic debate? Here’s what you should know 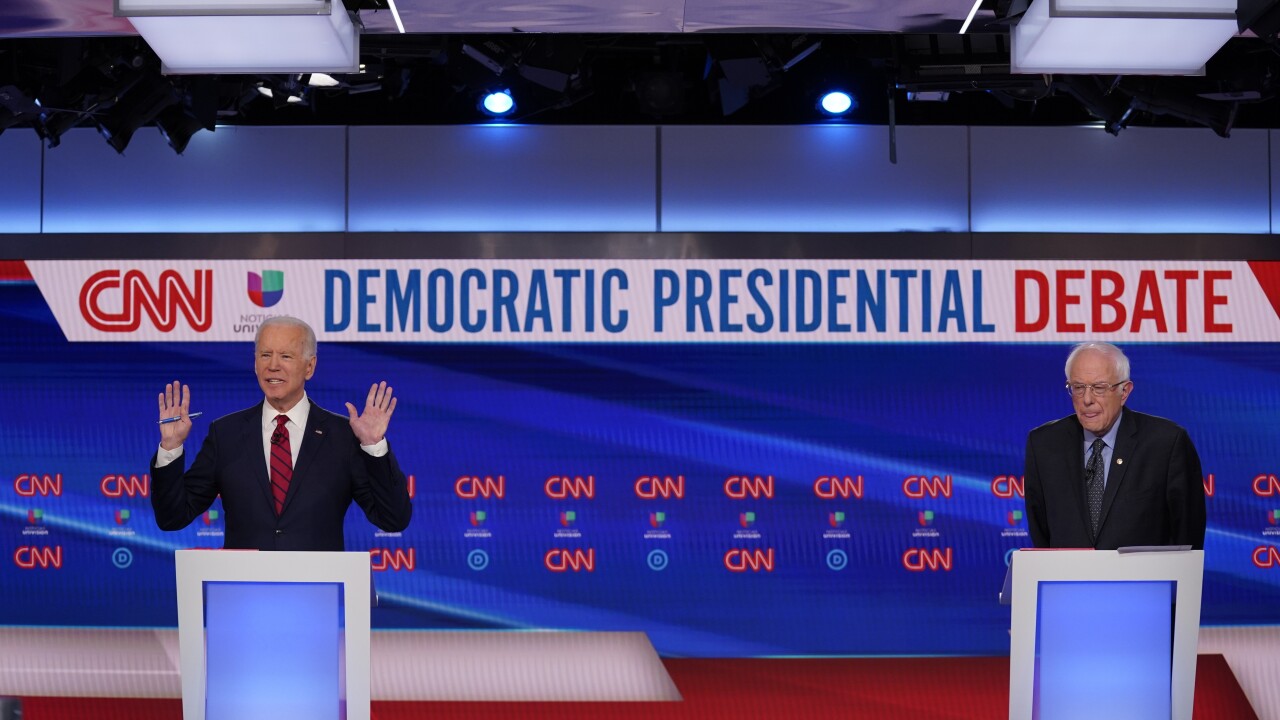 The leading Democratic candidates faced off in Washington in the 11th debate of the primary season. The event was moved from Arizona, which votes Tuesday, because of concerns over the growing coronavirus pandemic, and is being held without an audience.

Biden also stepped on the stage as the front-runner in a race dramatically different from the party's last debate less than three weeks ago, following cascading wins that started with his resounding victory in the South Carolina primary. Other moderates departed the race, with several consolidating around Biden and united by a desire to block Sanders.

The fast-moving coronavirus has largely grounded the candidates, leading them to cancel rallies even as several big states prepare to vote on Tuesday. They greeted each other with an elbow bump.

Here's what you missed:

The first clash of the head-to-head debate between Biden and Sanders came in the form of a dust-up over whether Sanders' signature health care plan is the best way to respond to the coronavirus.

After Sanders said the Trump administration's response to the outbreak laid bare the weaknesses of the nation's current health care system, Biden pointed out that Italy - where the virus has essentially quarantined the country, has a government-run health care system that hasn't alleviated the problem.

“With all due respect to 'Medicare for All,' you have a single-payer system in Italy,” Biden said. "It doesn't work there."

Sanders responded by noting that experts say “one of the reasons that we are unprepared ... is that we don't have a system.”

Sanders argued his single-payer health care system would provide free treatment for those diagnosed with COVID-19. Biden said he would authorize government funds to cover treatment.

Sanders said if he were president, he would make sure no one has to pay for coronavirus testing or treatment. Biden later said he also believes no one should have to pay.

Biden said every state needs to have at least 10 drive-thru testing locations and that the Defense Department and the Federal Emergency Management Agency need to be making plans to set up additional hospital beds.

The top Democrats vying for their party's presidential nomination used a question on the economic crisis prompted by the coronavirus outbreak to highlight the contrasts on how their campaigns would approach the issue.

Asked how he as president would alleviate the strains, Sanders said that the crisis further shows the need for a holistic overhaul of the country's economic system.

Saying, "People are looking for results, not a revolution," former Vice President Joe Biden stressed he would focus on meeting "immediate needs" like helping Americans make sure not to miss mortgage payments.

Earlier Sunday, the Federal Reserve took massive emergency action to help the economy withstand the coronavirus by slashing its benchmark interest rate to near zero and saying it would buy $700 billion in Treasury and mortgage bonds.

Another heated exchange in the first head-to-head debate between Biden and Sanders came over the Vermont senator's assertion that Biden advocated for cuts in Social Security while serving as a U.S. senator.

Sanders repeatedly asked the former vice president during Sunday night's debate if he had pushed for cuts to the entitlement program on the floor of the U.S. Senate. Sanders also said Biden pushed for cuts needed in Medicare and veterans' programs.

When Biden several times said he had not done so, Sanders told viewers to "Go to the YouTube right now" to see what he characterized as video proving his case on Biden's comments.

Biden also responded by saying he has laid out a plan for adding to Social Security, as well as how he would pay for the changes -- a critique he has made repeatedly of Sanders' plans, particularly “Medicare for All.”

Both of the Democratic candidates said they are healthy amid the coronavirus crisis -- and are taking concrete steps to keep it that way.

Sanders, 78, noted that he “loves” doing large rallies around the country but has curtailed them and now addresses supporters online. His campaign staff has been working from home and Sanders also noted that, “I’m not shaking hands. Joe and I did not shake hands."

Biden, 77, noted that he doesn’t have any of the “underlying conditions” that make the virus especially dangerous and said he was taking precautions that people in their 30s, 60s, or 80s should be doing.

Biden said his campaign staff was also working from home and that he was washing his hands “God knows how many times” per day and using hand sanitizer almost as much.

Biden is committing to naming a woman as his running mate if he's the Democratic presidential nominee.

Asked the same question, Sanders didn't definitively commit but said, “In all likelihood, I will.”

Biden has previously said he would seriously consider naming a woman or a person of color as his running mate.

Also Sunday night, Biden repeated a previous pledge to nominate a black woman to the U.S. Supreme Court if given the chance to do so as president.

Both he and Sanders have been under pressure to consider a woman or person of color as a running mate as the once-historically diverse field of Democratic presidential candidates has dwindled to two white men.