Democrats debated days before the New Hampshire primary. Here's what you missed. 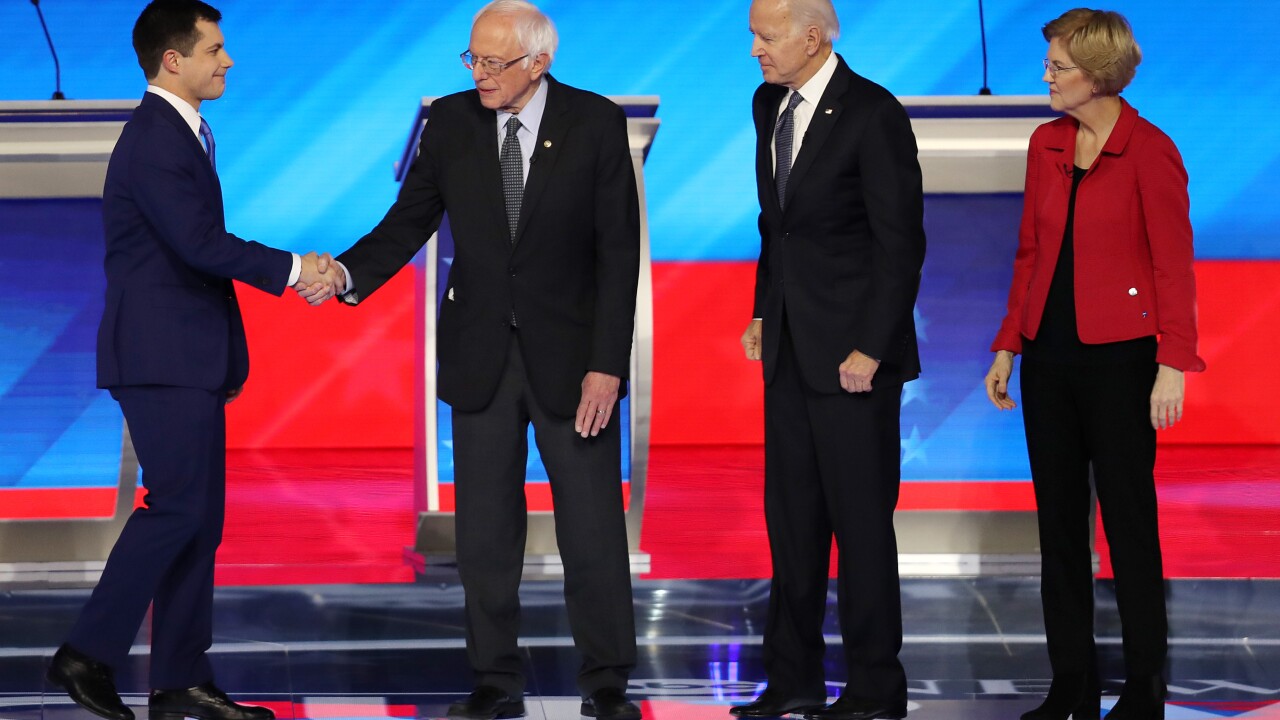 Democrats debated in the Friday between the Iowa caucuses and Tuesday's New Hampshire primary.

Joe Biden is acknowledging he “took a hit” in Iowa and says he'll “probably take a hit” in New Hampshire as well.

Biden was asked early in Friday's Democratic debate in New Hampshire why he thinks his party would be taking a risk by nominating either Bernie Sanders or Pete Buttigieg. Biden finished a distant fourth in Iowa's caucuses on Monday, while Sanders and Buttigieg finished in a near tie for first.

The former vice president noted that Sanders calls himself a “democratic socialist.” Biden said if Sanders is the nominee, President Donald Trump would put that label “on every Democratic running” nationwide.

Biden praised Buttigieg as a “patriot” but also took a dig at the 38-year-old former South Bend, Indiana, as a “the mayor of a small town.” Biden also suggested that Buttigieg will have trouble building a racially diverse coalition as the nominating contest moves beyond the overwhelming white states of Iowa and New Hampshire.

Biden noted that Sanders won the New Hampshire primary handily in 2016 over Hillary Clinton, so he said he'll “probably take a hit” in the state next Tuesday.

“No matter who wins this damned thing, we're all going to stand together to defeat Donald Trump,” he added.

Sanders was asked to respond to Trump's comments earlier this week to Fox News, when the president said, “I think of communism when I think of Bernie."

Asked if they had concerns about a top-of-the-ticket candidate with a "democratic socialist" moniker, Minnesota Sen. Amy Klobuchar and businessman Tom Steyer raised their hands.

Neither Elizabeth Warren nor Pete Buttigieg is proving willing to criticize Bernie Sanders for embracing democratic socialism in the opening moments of the Democratic debate.

Warren, a Massachusetts senator, was asked about saying previously that she is “a capitalist to my bones.” But she refused to make a major contrast at Friday's debate in New Hampshire, saying only, “Bernie and I have been friends for a long time.”

Warren said the “fundamental question” is “how we bring our party together” and talked about fighting government corruption, saying it is “an issue we can all agree on.”

Buttigieg, the former mayor of South Bend, Indiana, said he wasn’t interested in labels like socialism. He and Sanders, a senator from Vermont, went on to clash on policy rather than on ideological labels.

Pete Buttigieg says that the Obama administration met the moment of their day and “now we have to meet this moment."

Buttigieg sought to turn his relative lack of experience in politics into an advantage at Friday's Democratic debate in New Hampshire.

He was challenged by Joe Biden, who listed off some of his accomplishments during a long tenure in politics, including the Violence Against Women Act. Biden said, “I don't know what about the past of Barack Obama and Joe Biden was so bad” and called for “someone who knows how to get things done.”

In his reply, Buttigieg noted the accomplishments of the Obama administration and said that “now, we have to meet this moment.”

Biden and Buttigieg have previously clashed over a contrast in their ages and elected experience.

The billionaire climate activist made the request during Friday night's debate in New Hampshire. He was referencing comments earlier in the week, when a South Carolina state senator tweeted that the chair of South Carolina's Legislative Black Caucus — who has endorsed Steyer and works for him as an adviser — had received "almost $50,000" from Steyer's campaign.

Biden replied that he believed Harpootlian was sorry for the comment while noting he has "more support in South Carolina in the Black Caucus" than others in the field.

The candidates agree that they’d appoint Supreme Court justices who’d uphold the Roe v. Wade decision that legalized abortion, but there are distinctions on whether to try to expand the size of the court.

Pete Buttigieg wants to expand the court through a constitutional amendment while also changing the way justices are selected. The former mayor of South Bend, Indiana, disputed that his idea amounts to packing the court.

Biden and billionaire businessman Tom Steyer said the argument over the court shows how important it is for Democrats to win enough Senate seats to retake a majority. Biden argued that he’s the only Democratic candidate who’d have a coattail effect for Senate candidates in battleground states and GOP-leaning states like North Carolina and Georgia.

Billionaire Michael Bloomberg didn’t qualify for the Democratic presidential debate in New Hampshire -- but it didn’t always feel that way.

The candidates on stage Friday night were asked several times about the former mayor of New York City.

Massachusetts Sen. Elizabeth Warren responded, “I don’t think anyone ought to be able to buy their way into the nomination or to be president of the United States.” She also said candidates shouldn’t “suck up to billionaires to do it.”

That was a swipe at former Vice President Joe Biden and former South Bend, Indiana, Mayor Pete Buttigieg, who have relied on large donors to finance their campaigns.