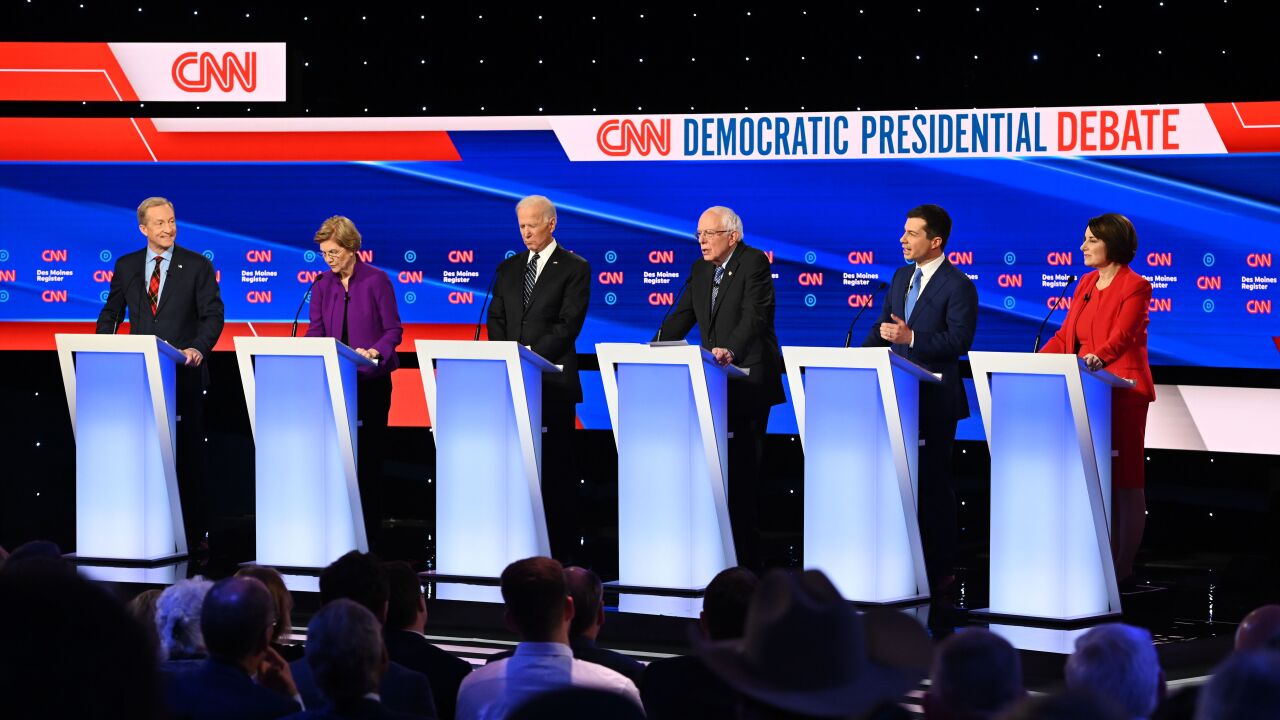 Former Vice President Joe Biden wasted no time in the opening minutes of Democrats’ presidential debate in calling his 2002 vote authorizing an Iraq invasion a mistake.

It was an unusually matter-of-fact tone of contrition for Biden, especially as he tries to emphasize his long foreign policy record as a vice president and a six-term U.S. senator. The 77-year-old candidate has throughout his campaign mostly defended portions of his record that have come under criticism from his party’s progressive flank.

Vermont Sen. Bernie Sanders nonetheless tried to capitalize on the issue Tuesday night. He pointed out that he voted against the Bush administration’s war powers request as a member of the House, and he called the war the “worst foreign policy blunder in history.”

Biden maintained that he’d compare his “record overall” to any of his Democratic competitors, and he pointed to his role in the Obama administration in dramatically scaling back U.S. involvement in Iraq.

In one of the more contentious exchanges, Elizabeth Warren is standing behind her charge that Bernie Sanders said a woman could not defeat Donald Trump.

She made an energetic case for a female nominee in a Tuesday night debate that raised gender as a core issue in the Democrats' sprint to the Iowa caucuses.

Sanders firmly denied Warren's accusation and said it was “incomprehensible” to believe he would suggest a woman couldn't become the president.

Meanwhile, Biden says the outcome of a Senate impeachment trial against President Donald Trump won’t affect his arguments against the Republican president in the 2020 campaign.

And the former vice president said at Tuesday night's Democratic presidential debate that it’s “irrelevant” whether Trump claims exoneration if the Republican-led Senate votes as expected and doesn’t remove him from office.

Biden said House Democrats had “no choice” but to impeach the president for Trump's efforts to pressure Ukrainian officials to launch investigations into Biden's son Hunter's business dealings in the country and his own foreign policy engagement in Ukraine when he was vice president.

Trump’s claims about the Bidens have been debunked. But Biden said he expects Trump and Republicans to continue to allege that the Bidens are corrupt.

“I did my job,” Biden said at the debate.

Minnesota Sen. Amy Klobuchar says the upcoming Senate trial "is a decency check on our government."

"This is a patriotism check," she added at Tuesday night's Democratic presidential debate, noting the upcoming 2020 election is yet another check.

Klobuchar and her fellow senators running for president will have to contend with the impeachment trial as the push to the Iowa caucuses enters its final days. Other candidates like former Vice President Joe Biden and former South Bend, Indiana, Mayor Pete Buttigieg will be able to continue campaigning freely as the Senate trial gets underway.

“And if our Republican colleagues won't allow those witnesses, they may as well give the president a crown and a scepter. They may as well make him king," Klobuchar said.

Elsewhere, Pete Buttigieg says he will keep up his effort to appeal to black voters, whose support will be vital to winning his party's nomination.

The former mayor said during Tuesday night's debate in Des Moines, Iowa, that "the black voters who know me best are supporting me," referencing local leaders in his hometown of South Bend, Indiana.

Buttigieg has built up support in some of the early states but has struggled in South Carolina, where black voters comprise the majority of the Democratic primary electorate. It's the first state where candidates' mettle with black voters is tested.

Buttigieg pointed Tuesday to his endorsement from U.S. Rep. Anthony Brown of Maryland, who earlier this month became the first member of the Congressional Black Caucus to back Buttigieg's campaign.