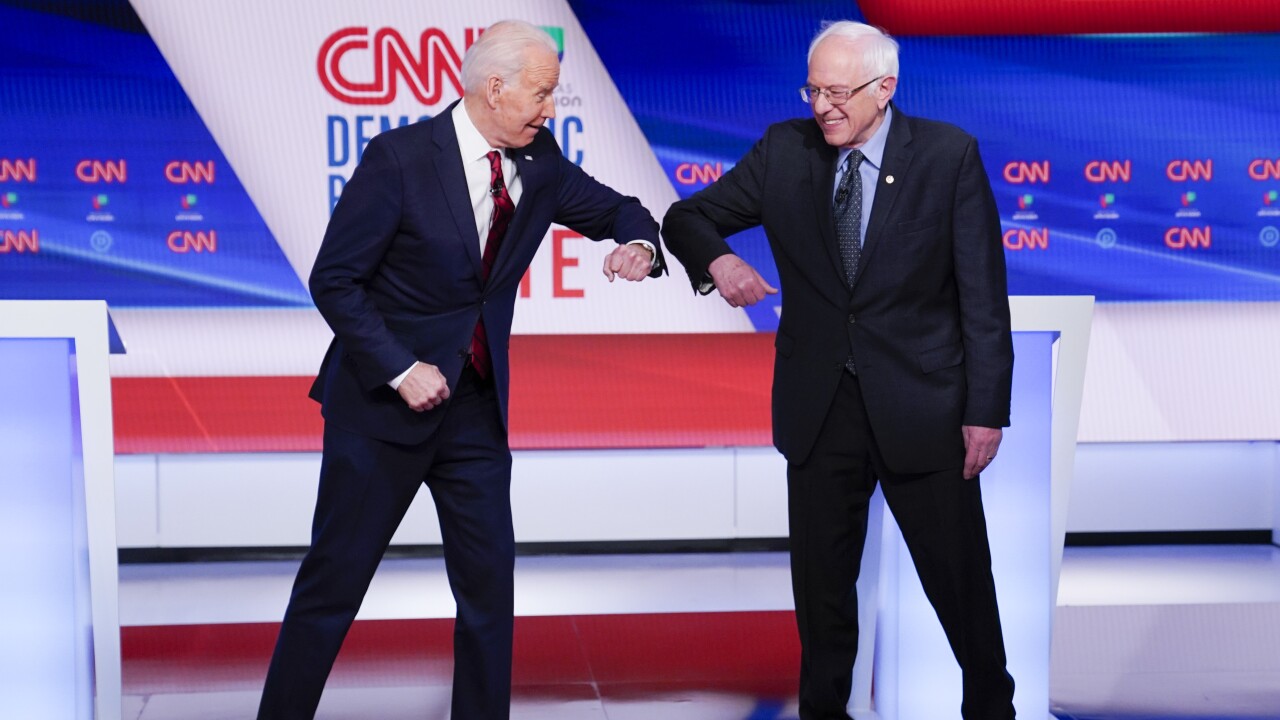 WASHINGTON — Former Vice President Joe Biden and Sen. Bernie Sanders are calling for increased testing in the United States for the rapidly spreading coronavirus and economic relief for Americans suffering as a result of the global pandemic.

They're seeking to position themselves in Sunday's Democratic debate as best prepared to lead a nation through a crisis.

Biden and Sanders skipped a handshake, greeting each other instead with an elbow bump, then took their positions at podiums spaced 6 feet apart in keeping with guidance from the Centers for Disease Control and Prevention for limiting the spread of the novel coronavirus.

The first clash of the head-to-head debate between Biden and Sanders came in the form of a dust-up over whether Sanders' signature health care plan is the best way to respond to the coronavirus.

Sanders said if he were president he would make sure no one has to pay for coronavirus testing or treatment. Biden later said he also believes no one should have to pay.

After Sanders said the Trump administration's response to the outbreak laid bare the weaknesses of the nation's current health care system, Biden pointed out that Italy - where the virus has essentially quarantined the country, has a government-run health care system that hasn't alleviated the problem.

“With all due respect to 'Medicare for All,' you have a single-payer system in Italy,” Biden said. "It doesn't work there."

Biden said every state needs to have at least 10 drive-thru testing locations and that the Defense Department and the Federal Emergency Management Agency need to be making plans to set up additional hospital beds.

Sanders noted that experts say “one of the reasons that we are unprepared ... is that we don't have a system.”

Sanders argued his single-payer health care system would provide free treatment for those diagnosed with COVID-19. Biden said he would authorize government funds to cover treatment.

Both of the candidates said they are healthy amid the coronavirus crisis -- and are taking concrete steps to keep it that way.

Sanders, 78, noted that he “loves” doing large rallies around the country but has curtailed them and now addresses supporters online. His campaign staff has been working from home and Sanders also noted that he is not shaking hands.

Biden, 77, noted that he doesn’t have any of the “underlying conditions” that make the virus especially dangerous and said he was taking precautions that people in their 30s, 60s, or 80s should be doing.

Biden said his campaign staff was also working from home and that he was washing his hands “God knows how many times” per day and using hand sanitizer almost as much.