Should President Trump be prosecuted for the Capitol riot? 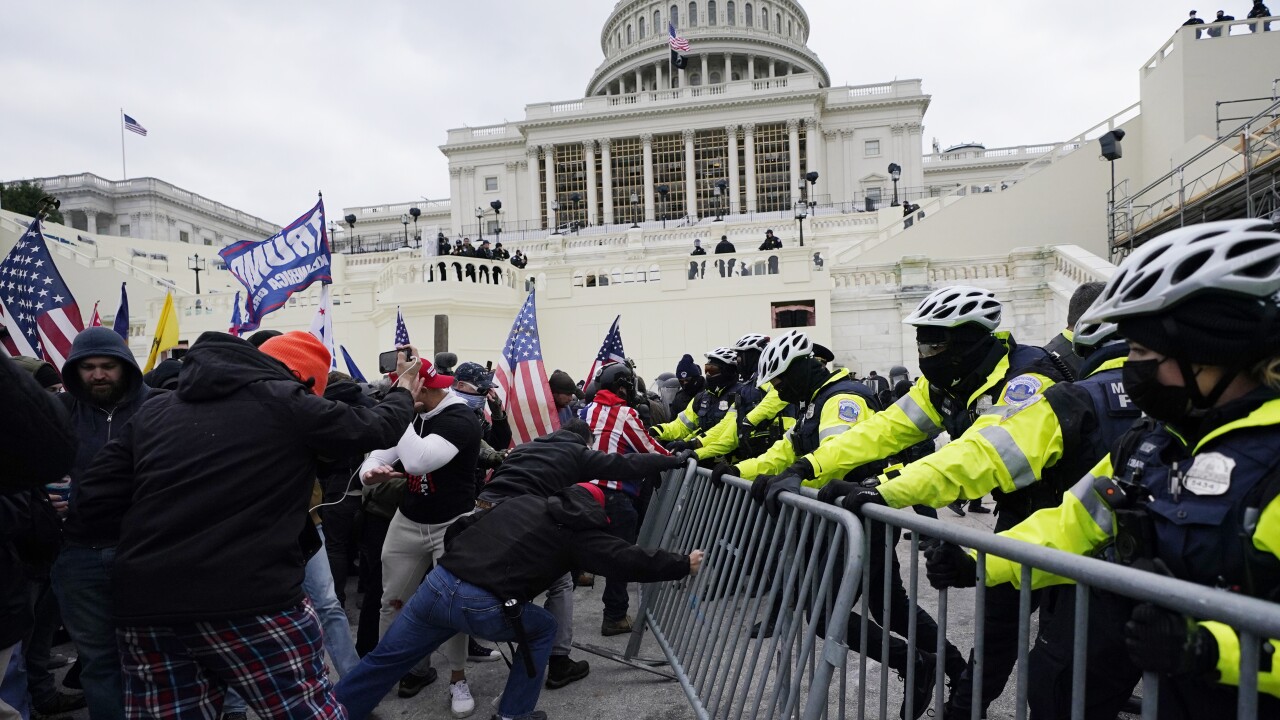 Julio Cortez, AP
Trump supporters try to break through a police barrier at the Capitol in Washington, D.C. on Jan. 6, 2021.

The New York Times reports that acting Assistant U.S. Attorney Ken Kohl was asked about the likelihood and said, “Don’t expect any changes of that nature.”

But, legal experts told PIX11 News such prosecutions are possible even though they disagreed on the prospects for bringing them.

The violence in Washington D.C. on Wednesday started after Trump held a rally near the White House. He told thousands of supporters that the election had been stolen by Democrat fraud.

“We will never give up. We will never concede; it doesn’t happen. You don’t concede when there’s theft involved,” Trump said.

He also urged the crowd to march on the Capitol and support the legislators objecting to the certification of Electoral College votes, but despite the tough talk, he never outright advocated violence.

The president did not march to the Capitol himself.

His acolytes, who did march, confronted a seemingly undermanned contingent of Capitol Hill Police and stormed inside.

Trump eventually made and released a video asking the rioters to go home peacefully. But instead of blasting the mob, he praised them.

“We love you. You’re very special,” he said.

The president’s behavior could have him facing federal charges when President-elect Joe Biden’s administration takes over, according to Boston College Law School professor Kent Greenfield.

“Trump’s efforts on Wednesday and before seem to me to meet the definition of incitement and sedition,” Greenfield said. “The DOJ policy of not charging a sitting president would only cover him until noon on Jan 20. After that, he could be charged.”

That would mean Trump could be prosecuted for incitement to riot, as long as the actions have a federal connection through interstate travel, or under the federal statute criminalizing seditious conspiracy (18 U.S. Code Section 2384).

When he’s out of office, Trump would no longer be covered by the Justice Department position of not prosecuting a sitting president.

But Gregory Magarian, a law professor with Washington University in St. Louis, doubts there will be any charges, whether for sedition or rebellion and insurrection (18 U.S. Code Section 2383). The latter provides for a penalty that would forbid Trump from ever "holding any office under the United States."

“I think the chances that Trump could face any of the charges … based on the facts we know now, are very slim,” Magarian said. “All of those crimes are hard to prove and rarely charged … and I do think there’s a good argument that Trump’s speech to his supporters was incitement.”

A professor of constitutional law, Magarian specializes in freedom of expression issues. And the First Amendment seems to be a barrier against prosecution of the president in the views of other scholars, including Stanford Law School criminal justice professor David Sklansky.

“First Amendment law blocks a criminal prosecution of someone just for inciting a riot unless their words were calculated to produce imminent violence, and it's not clear that the president's words satisfied that standard,” Sklansky said. “So although they probably constituted grounds for impeachment, they may not have been explicit enough to sustain a criminal conviction.”

Sklansky’s colleague at Stanford, professor Robert Weisberg, a Bronx native and co-director of the Stanford Criminal Justice Center, agreed. He said charges against Trump, “are not impossible…I can imagine and I don’t think it would be an unethical contrivance.”

He added, it would be, “very hard though even getting a grand jury indictment … It is the First Amendment considerations which are the obstacles to any prosecution.”

Could Trump pardon himself?

Then there’s the issue of whether Trump can insulate himself from federal criminal charges by pardoning himself before he leaves office.

It’s an issue that has never been litigated but has drawn a lot of analysis from legal scholars.

They generally note that the literal text of the constitution doesn’t prevent a sitting president from pardoning himself and that pardons once issued cannot be undone. However, they tend to believe that a self-pardon could not be legal because otherwise a president could commit all kinds of federal crimes with impunity.

Professor Sklansky put it this way: "The position of the U.S. Department of Justice has long been that a self-pardon would be invalid, because it would violate the fundamental rule that no person can be the judge of their own case. I think that position is correct."

Professor Magarian said allowing a president to pardon themself would place them “almost entirely above the law.”

“I think the better argument is that the president can’t pardon himself (for a crime already committed),” Magarian said. “Allowing [Trump] to pardon himself prospectively would be even worse. If he tried it, the feds might well still prosecute him, and the Supreme Court would have to rule on the effect of the pardon. They’d prefer to dodge the issue, but I don’t think they could.”

Professor Weisberg put the issue of a self-pardon simply.

“I think there is a very good argument that you can’t,” he said. “It is a very plausible argument to say that the notion of a self-pardon is just an oxymoron.”

“Felony murder allows anyone joining in a crime to be charged with murder if anyone is killed during the conduct of that crime, even if the person charged did not commit the killing,” Greenfield said.

The potential implications there are staggering.

“Anyone who was a party of the violence in the capitol could be charged with felony murder,” Greenfield said.

That may not be likely. But it can give both federal and local prosecutors a lot of leverage.