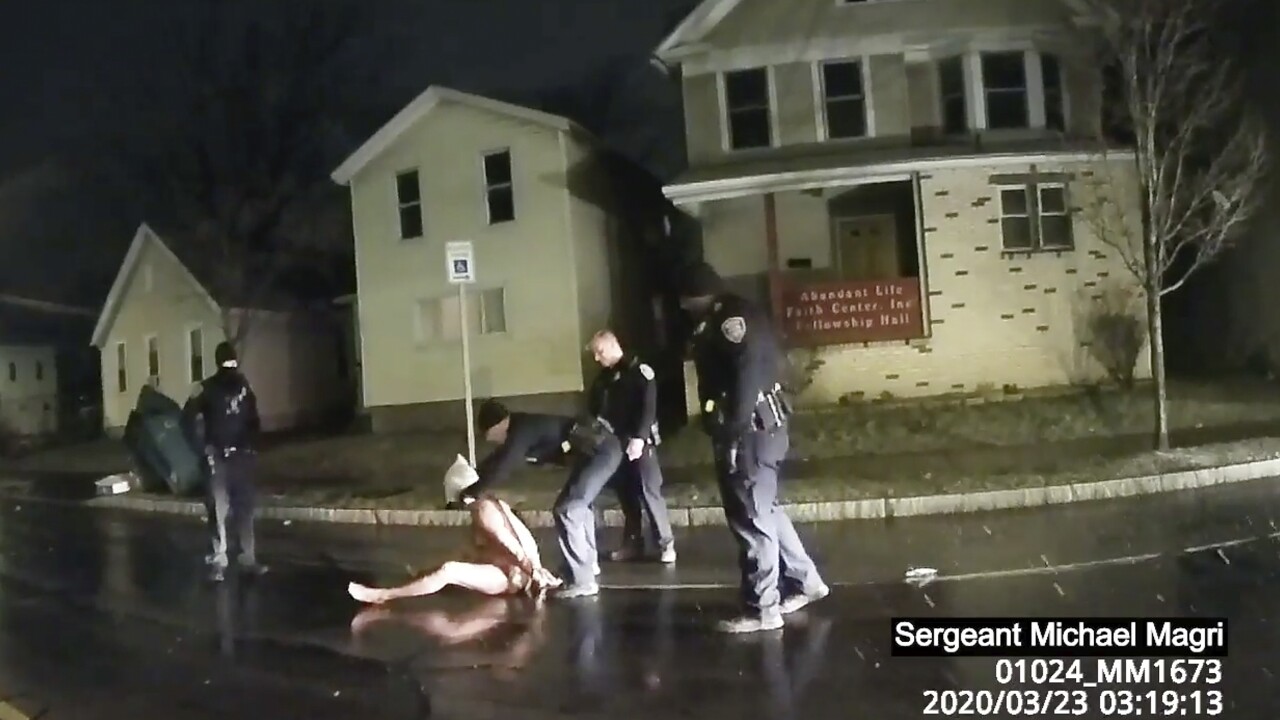 AP
In this image taken from police body camera video provided by Roth and Roth LLP, a Rochester police officer puts a hood over the head of Daniel Prude, on March 23, 2020, in Rochester, N.Y. Video of Prude, a Black man who had run naked through the streets of the western New York city, died of asphyxiation after a group of police officers put a hood over his head, then pressed his face into the pavement for two minutes, according to video and records released Wednesday, Sept. 2, 2020, by the man's family. Prude died March 30 after he was taken off life support, seven days after the encounter with police in Rochester. (Rochester Police via Roth and Roth LLP via AP)

Daniel Prude died March 30 after he was taken off life support, seven days after the encounter with police in Rochester. His death received no public attention until Wednesday, when his family released police body camera video they obtained.

Rochester Mayor Lovely Ann Warren said it was clear from the video that Prude needed help. Prude was handcuffed, hooded and pinned down by police.

"Our response to him was wrong and we need to change how we deal with these situations going forward," she said.

Warren said she didn't even know the extent of what happened in March until early August.

"At no time did I ever know the extent, or that there was any hands-on incident with these officers until August 4th," she said.

That was the first day she saw the video of Prude's interactions with police.

"When I watched that video, I was enraged," she said. "I wanted to come forward that day."

She didn't because the city's Law Department told her they'd been asked not to get involved until they were done, Warren said.

"I allowed the legal mind and the legal side to win out on my humanity on that day," she said.

Warren said she expected the police union might sue over the suspension decision.

Prude, a father of five, was in Rochester on a visit.

"He lost his life because of the actions of our police officers," Warren said.

“The death of Daniel Prude was a tragedy and I extend my deepest condolences to his family," James said in a statement. "I share the community’s concerns about ensuring a fair and independent investigation into his death and support their right to protest. As with every investigation, we will follow the facts of this case and ensure a complete and thorough examination of all relevant parties.”

Gov. Andrew Cuomo said that the attorney general has been working on the case for months now.

"I did an executive order that allows the attorney general to investigate an unarmed person that died in police custody," he said. "That is ongoing, she's been doing the investigation since July but I don't want to comment on an ongoing investigation."

"We cannot continue to fail Black lives this way," she said.