Final Democratic debate of 2019 Thursday: 6 things to look for 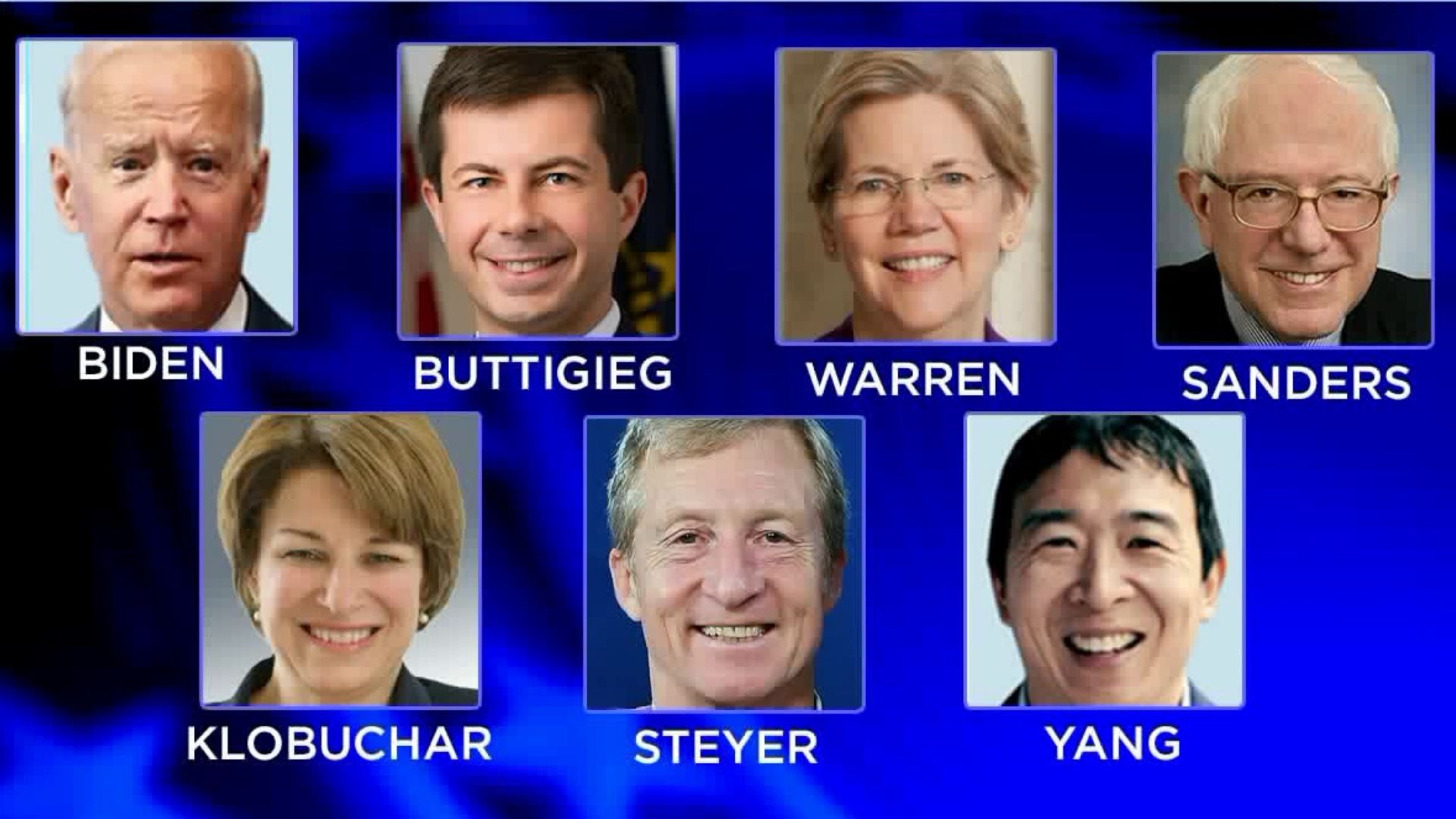 The final Democratic primary debate of 2019 is one of the best opportunities left for the seven Democrats slated to appear here in California on Thursday to leave voters in Iowa and across the country with a good impression before voting begins in 2020. A host of Democratic primary storylines will play out when the candidates take the stage: Is there anything that can knock former Vice President Joe Biden off the top? Will a rising Sen. Bernie Sanders and stumbling Sen. Elizabeth Warren stay friendly? Will the tumultuous last three weeks for South Bend, Indiana, Mayor Pete Buttigieg play out on the stage? And can any of the other candidates -- Minnesota Sen. Amy Klobuchar, businessman Tom Steyer and businessman Andrew Yang -- create a moment that raises their standing outside of the top four?

LOS ANGELES — The final Democratic primary debate of 2019 is one of the best opportunities left for the seven Democrats slated to appear here in California on Thursday to leave voters in Iowa and across the country with a good impression before voting begins in 2020.

A host of Democratic primary storylines will play out when the candidates take the stage: Is there anything that can knock former Vice President Joe Biden off the top? Will a rising Sen. Bernie Sanders and stumbling Sen. Elizabeth Warren stay friendly? Will the tumultuous last three weeks for South Bend, Indiana, Mayor Pete Buttigieg play out on the stage?

And can any of the other candidates -- Minnesota Sen. Amy Klobuchar, businessman Tom Steyer and businessman Andrew Yang -- create a moment that raises their standing outside of the top four?

The timing is important, too. Not only is the debate the second to last contest on the calendar before the Iowa caucuses, but the candidates will debate the day after the House of Representatives voted to impeach President Donald Trump and weeks before the Senate is expected to takes up the impeachment trial.

The ongoing impeachment has already overshadowed the Democratic primary and the trial will likely do the same, and, in the process, take three of the senators on stage -- Sanders, Warren and Klobuchar -- off the campaign trail and keep them in Washington.

There will also be some eyes on those candidates who are still running but didn't meet the qualifications for the debate in Los Angeles. Former Housing and Urban Development Secretary Julián Castro, a candidate who has now missed multiple debates, will be live tweeting during the debate, while New Jersey Sen. Cory Booker, who is missing his first contest, will be in Iowa. Both Booker and Castro have drawn attention to the lack of black and Latino representation on Thursday's stage.

And then there is former New York Mayor Michael Bloomberg, whose rampant spending and frenetic hiring has turned his late entry campaign into a real operation that is registering in national polls.

Here is what to watch for on Thursday night:

What could surprise Biden?

In recent weeks, former Vice President Joe Biden has enjoyed the smoothest sailing of his 2020 run to date.

Three of his debate-stage tormenters won't be on stage Thursday night. California Sen. Kamala Harris, who confronted Biden on his position on federally mandated busing at the first debate in June, dropped out of the race in December. Two other candidates who have sharply criticized him, New Jersey Sen. Cory Booker on race and former Housing and Urban Development Secretary Julián Castro on Obama-era deportations, missed the DNC's polling and fundraising thresholds and didn't qualify.

Of those who are left, two other members of the Democratic field's four-person top tier, Warren and Buttigieg, have been quarreling with each other.

Biden has had some tense moments, including terse exchanges with voters. Vermont Sen. Bernie Sanders is challenging him among Latinos, a key part of the electorate in early-voting states like Nevada and California. And everything can change in an instant with one comment or exchange on the debate stage.

But his campaign enters Thursday feeling good about its position in the race. His most important asset, a consistent lead with black voters -- crucial to South Carolina, the fourth state to vote in the nominating process, and many of the states that vote on Super Tuesday -- has shown no signs of slipping.

What Biden is left to wonder: Where are the attacks coming from? Biden remains the national front-runner, so they're certainly coming. But all of his most obvious critics are now gone. The ideological clashes with Warren and Sanders and generational criticisms from Buttigieg are sure to come -- but the bigger question is whether any candidate can hit Biden with something he doesn't see coming.

When Democrats met to debate in Atlanta last month, Warren was rising and clearly a target for the more moderate figures in the race. Klobuchar, in an attempt to blunt the Massachusetts senator, even touted Sanders to take a shot at Warren.

"At least Bernie's being honest here," she said on "Medicare for All," faulting Warren for at that point being unclear about how she will pay for her health care plan.

The strategy helped Sanders in the last debate and seemingly damaged Warren, whose lead nationally and in early states has been receding in recent weeks.

The duo has had an unspoken truce for much of the 2020 race, where each has avoided criticizing the other because of their political similarities and common goals.

But that dynamic could be tested on Thursday after a month that saw the distance between Sanders and Warren on Medicare for All get a little wider.

Warren, earlier this year, used a debate stage to proudly state she was "with Bernie" on the sweeping health care policy. But Warren has since backed away from Sanders' views on Medicare for All, particularly on how she will pay for the plan, how long it will take for her to implement the plan and, most recently, her emphasis on "choice" as part of her health care proposal.

Buttigieg went into the Atlanta debate with a target squarely affixed on his chest. But the direct attacks many expected going into the debate never fully materialized and Buttigieg left the debate largely unscathed, only getting drawn into a few small skirmishes with his fellow Democrats.

That hasn't been the case since that debate: Buttigieg has been under fire over the last few weeks for his use of top dollar fundraisers, the three years he worked for the elite consulting firm McKinsey & Company and questions about his ability to win over African American voters.

In response, Buttigieg has invited press to all of his fundraisers, released his list of clients during his three years at McKinsey and fought back against charges that he is unable to win over black voters.

The question going into Thursday's debate is whether what has played out over the last three weeks will become flash points on the debate stage.

Democratic operatives expect -- once again -- that Buttigieg will be a focal point of the debate, but that was also the thinking going into the November's debate.

Klobuchar needs a moment before Iowa

Klobuchar has been steadily building support since the start of the year as her campaign stakes almost all of her presidential hopes on Iowa.

But Klobuchar, despite that slow rise, needs a moment -- possibly more than anyone on the stage.

The Minnesota senator has been sticking with her "win big" message since the last debate, but has also tested attack lines against both those who are ideologically different to her -- namely going after Warren and Sanders on Medicare for All and other policies -- and those who are more in line with her politics -- including Buttigieg and Biden.

Klobuchar has proven over the last year that she is a confident debater who knows when to pick the right time to deliver a blow to her opponent, but that confidence has not been reflected in polls outside of Iowa, where the senator is struggling to gain traction.

Klobuchar is banking on the debate helping in Iowa, where she will head to on Friday with a four-day, 27-county tour as she aims to be the first candidate to make a recent debate stage to visit all of Iowa's 99 counties.

Entrepreneur Andrew Yang and billionaire investor Tom Steyer are on the sides of the stage -- both consistently qualifying for debates but struggling to get out of the low- to mid-single digits in at least one of the early-voting states.

Yang's rise from an unknown first-time candidate to the well-liked leader of a movement for a universal basic income has been one of the major stories of the 2020 race. He's professionalized his operation, bringing in veterans of Sanders' 2016 campaign, and has in recent months placed more emphasis on telling individual voters' stories, in hopes of taking the next step and chipping into top-tier candidates' support.

But for the first time, one of his proposals is under fire: Some progressives were critical of the health care plan he unveiled this week, which backed away from his previous support for Medicare for All. The question for Yang, who rarely criticizes his rivals, is whether he can head into the mix and deliver enough memorable moments to change his campaign's trajectory.

Steyer, meanwhile, seems set to try to offer his strongest contrast yet with the four front-runners. His clashes are typically not ideological, but rather about his background as a businessman against theirs as politicians. In a recent economic speech, he previewed an argument he's likely to use.

"Look, I have a lot of respect for the four leading Democratic candidates in this race. But here's the truth: none of them -- not Vice President Biden, not Sen. Warren, not Sen. Sanders, not Mayor Pete -- have built or run a successful, international business. None of them have a private sector track record of creating jobs -- none of them have first-hand experience growing wealth and prosperity," Steyer said.

Several candidates were left this month to desperation: Booker's campaign organized a letter (signed by Castro, who missed the stage, and all seven candidates who made it) lobbying the DNC to change its qualification rules for January to allow candidates to get on stage by hitting either the fundraising threshold or the polling threshold -- rather than both.

It's an effort to address the reality that the most diverse presidential primary field in history now has no black or Latino candidates on its debate stage. It's also a play for the future, since both are young enough to run again.

But the reality is, candidates who have missed the debate stage to date have fallen almost completely out of the public eye and the national conversation.

In late entrant Michael Bloomberg, the Democratic field finally has something it hadn't had before: A candidate who isn't on stage, but can spend enough money to get the exposure he's losing out on anyway.

The former New York City mayor's $100 million-plus advertising campaign is the closest thing to a game-changer for a candidate who didn't qualify for a debate yet. But since he isn't fundraising, it's hard to see how he would ever participate in a debate -- unless the DNC changes its rules to accommodate Booker and Castro, too.

Because of the historical size of the Democratic primary's field, Castro, Booker and Bloomberg are far from the only Democratic candidates still running but not on the stage. In fact, more candidates are off the debate stage than on it. Those candidates include a number of Democrats who haven't made a debate stage in months, including Colorado Sen. Michael Bennet, former Rep. John Delaney and author Marianne Williamson. Former Massachusetts governor Deval Patrick, who announced last month, also did not make the stage.