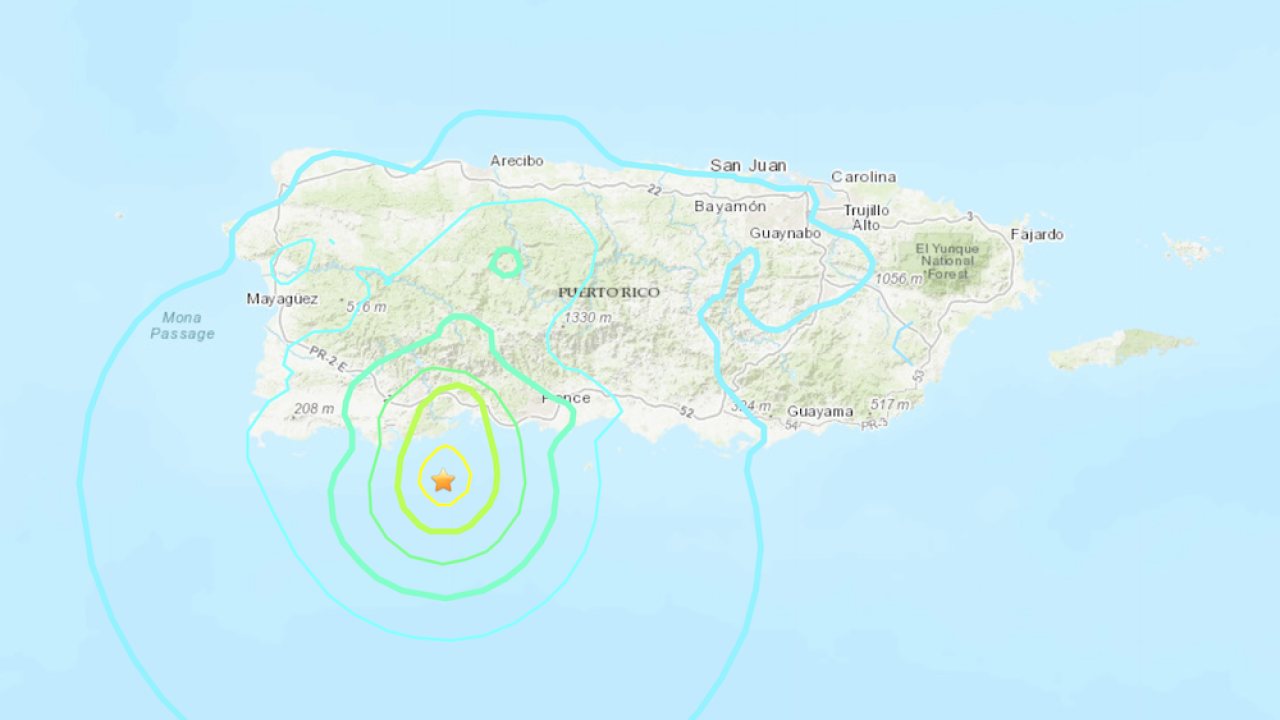 SAN JUAN, Puerto Rico — A5.8-magnitude quake hit Puerto Rico before dawn Monday, unleashing small landslides, causing power outages and severely cracking some homes. It was one of the strongest quakes yet to hit the U.S. territory that has been shaking for the past week.

There were no immediate reports of casualties.

The quake struck at 6:32 a.m. just south of the island at a relatively shallow depth of 6 miles according to the U.S. Geological Service. There was no tsunami threat, officials said.

Power outages were reported in some parts of Puerto Rico following the quake, Angel Vazquez, emergency management director for the southern coastal city of Ponce, told The Associated Press.

“This is one of the strongest quakes to date since it started shaking on Dec. 28,” he said. “It lasted a long time.”

Dr. Sindia Alvarado, who lives in the southern coastal town of Penuelas, said she was petrified.

“My entire family woke up screaming,” she said. “I though the house was going to crack in half.”

At a hotel in the southwest coastal town of Guanica, people panicked as they tried to flee in their cars, only to realize that large boulders were obstructing the only highway heading north to the capital of San Juan, attorney Jose Francisco Benitez told the AP.

“There was a state of panic,” he said. “There were even people in their underwear walking around the hotel.”

He said he and his girlfriend were in the room when the quake struck.

“I have never felt anything like this,” he said. “It was like a giant grabbed our room and shook it.”

The flurry of quakes in Puerto Rico’s southern region began the night of Dec. 28, with quakes ranging in magnitude from 4.7 to 5.1. Previous quakes of lesser magnitudes in recent days have cracked homes and led to goods falling off supermarket shelves.

Victor Huerfano, director of Puerto Rico’s Seismic Network, told the AP that shallow quakes were occurring along three faults in Puerto Rico’s southwest region: Lajas Valley, Montalva Point and the Guayanilla Canyon. He said the quakes overall come as the North American plate and the Caribbean plate squeezes Puerto Rico, and that it was unclear when they would stop or if bigger quakes would occur.

One of the largest and most damaging earthquakes to hit Puerto Rico occurred in October 1918, when a 7.3-magnitude quake struck near the island’s northwest coast, unleashing a tsunami and killing 116 people.