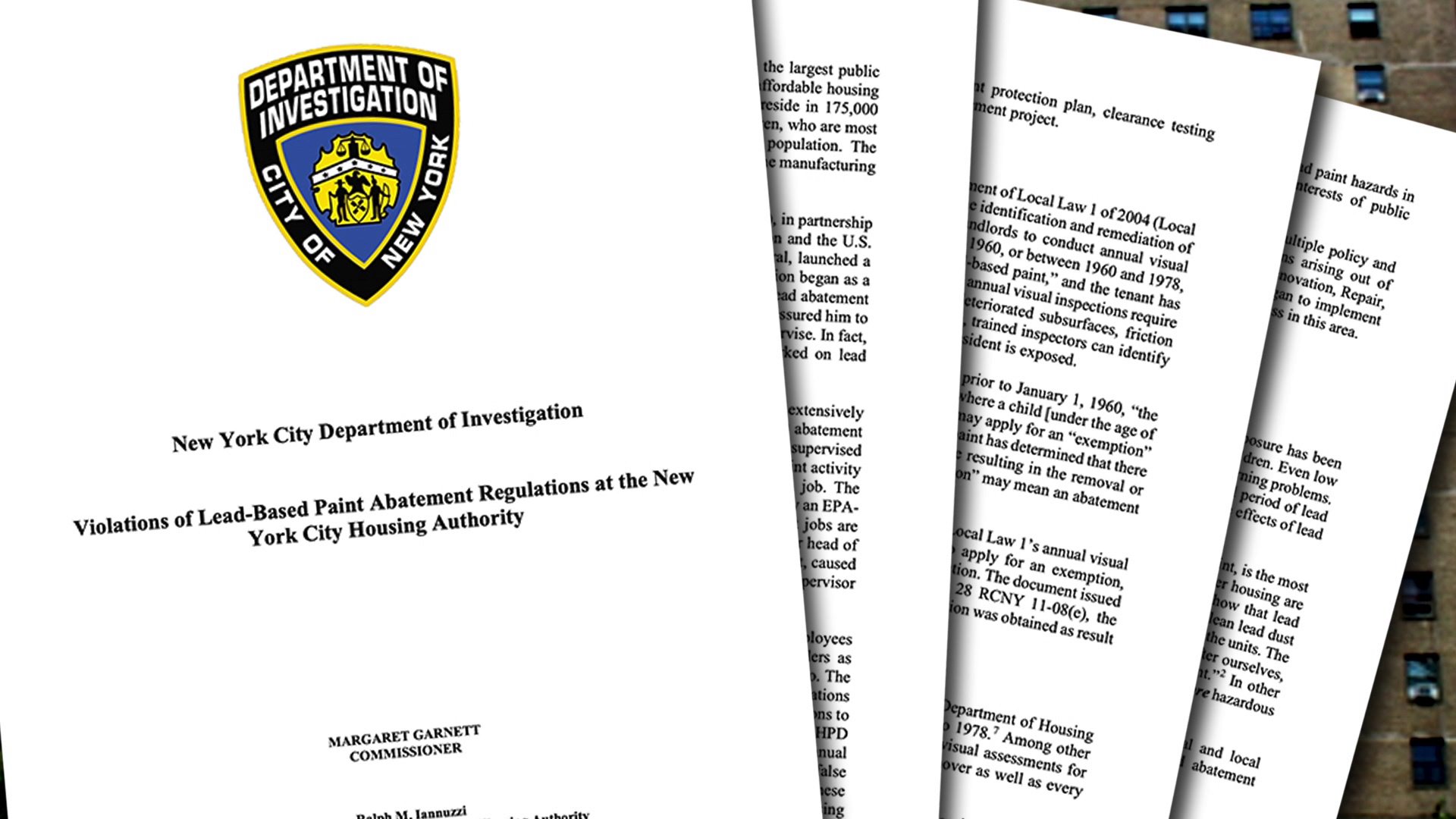 NEW YORK — A new disturbing report from the department of investigation says NYCHA has failed to follow proper EPA regulations when it comes to removing lead paint from its buildings.

Now, 20 families with children have been unnecessarily exposed to lead.

A 12-page-report released Thursday by the NYC Department of Investigation says NYCHA did not have an EPA-Certified supervisor on hand to ensure lead work was being done safely and properly, and not exposing tenants to the toxic environment. You can read the report here.

The actions of three NYCHA managers, according to Garnett, took place between 2013 and 2018, impacting thousands of apartments. Twenty families and their children have now been exposed to lead.

“No lead levels are safe. All 20 families have received assistance from DOH and the EPA,” said Garnett.

The investigation began in 2017, thanks to a whistleblower. The whistleblower exposed information that a manager of the NYCHA Lead Unit pressured him to falsely sign lead abatement paperwork and approve work that he did not supervise. Garnett says the NYCHA's lead removal program filed 163 work orders with false signatures and 323 exemptions.

NYCHA says it’s is in the process of re-inspecting the apartments that have been identified in this investigation to confirm that lead has been removed.

“As stated by the Inspector General, NYCHA cooperated with this investigation and has made significant systemic changes to its lead abatement program," NYCHA’s Chief Communications Officer Barbara Brancaccio NYCHA said. "NYCHA continues to work with the Federal Monitor to establish the highest standards for its policies and programs, not only to fulfill the terms of the 2019 HUD Agreement and bring the Authority into compliance but also to rebuild a culture of employee service and accountability; regain resident, employee, and public trust; and ensure this never happens again.”

Garnett says the manager who allegedly pressured other employees to falsify their signatures has been suspended from his job for 30 days without pay pending disciplinary proceedings. Garnett says the two other managers retired in 2018, during this investigation.

“We worked hard to build a criminal case out of this investigation with federal investigators,ultimately the case was been closed without charges,” said Garnett.

“This sounds like criminal conduct to me. If you are endangering the health and safety and well-being of New Yorkers and of people who are relying upon the government agency you work for, that sounds like something that law enforcement should be looking at,” said Johnson.

The EPA offered a statement on NYCHA's progress.

"Due to this investigation, NYCHA has made significant systemic changes to its in-house lead abatement program, such as consolidating units to improve communication and oversight," EPA public affairs officer Elias Rodriguez said. "This consolidation ensures that a single chain of supervision can be held responsible for compliance with all lead-related requirements, which is a significant improvement in accountability over the prior structure. EPA’s enforcement remains focused on protecting families from lead hazards."