Empty Times Square rings in 2021 after year of pandemic 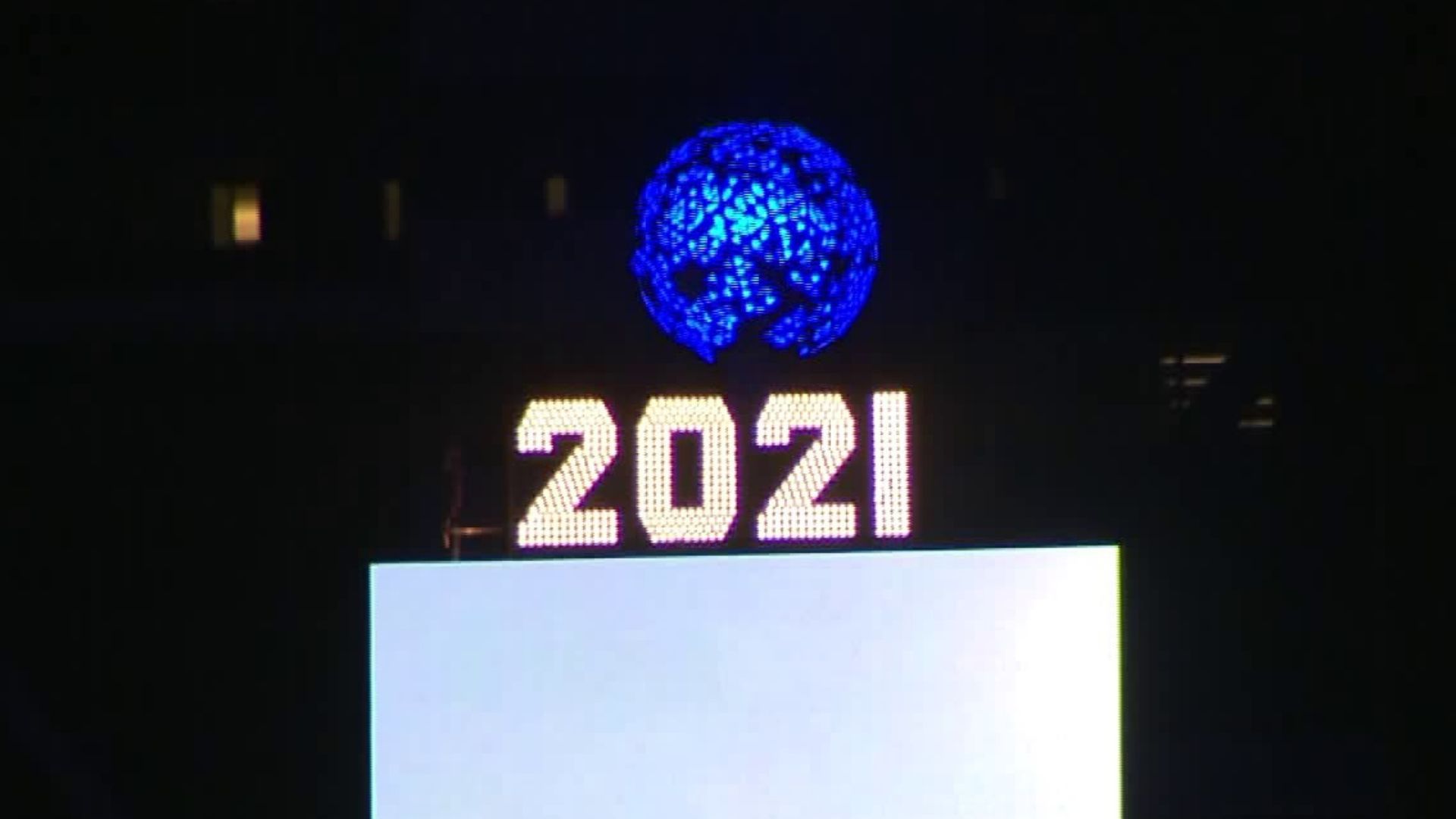 After New York City rang in 2021 in a nearly empty Times Square, PIX11's Katie Corrado was live on the scene and sharing some New Yorkers' resolutions for the new year, as well as her own. 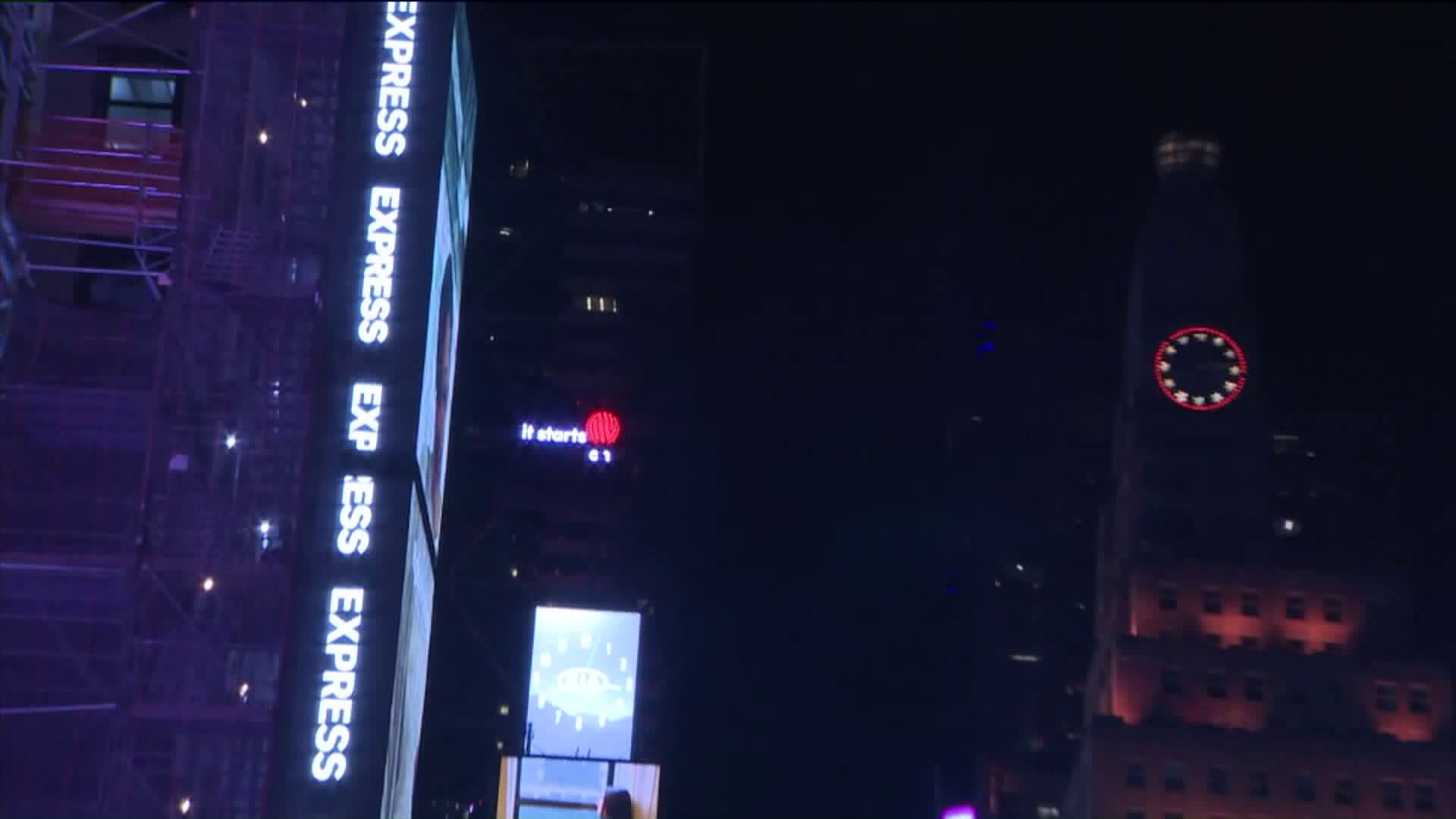 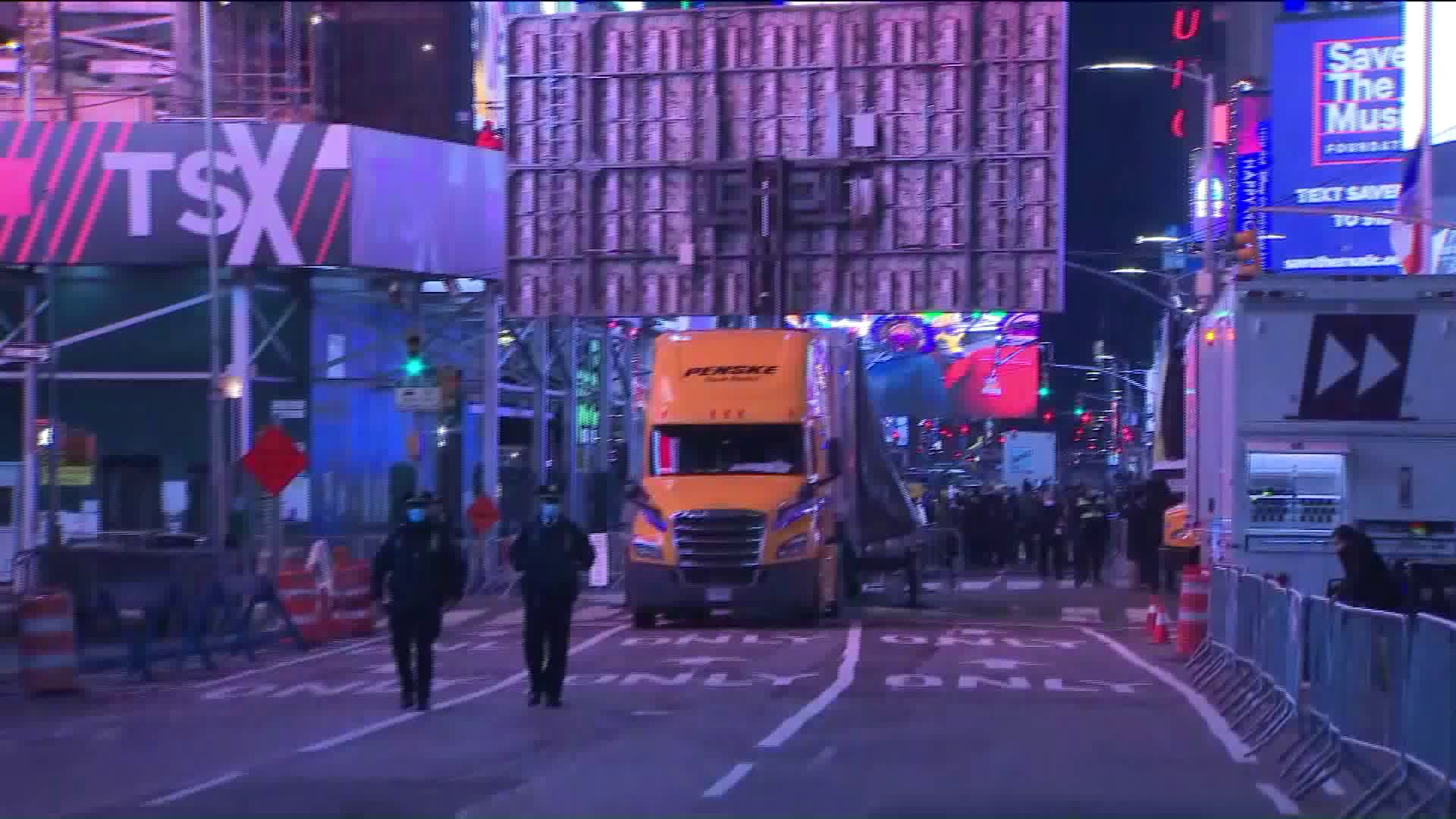 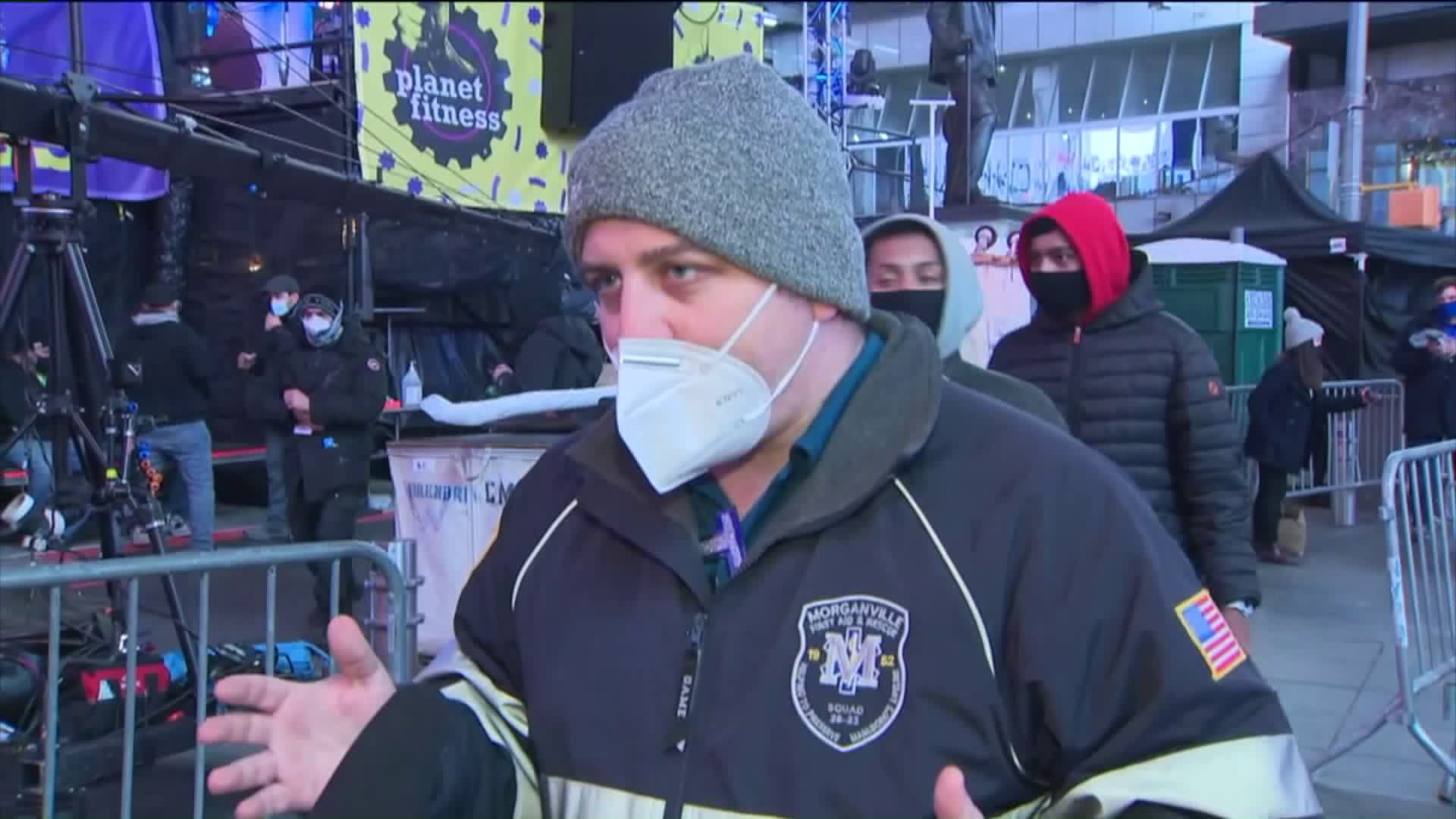 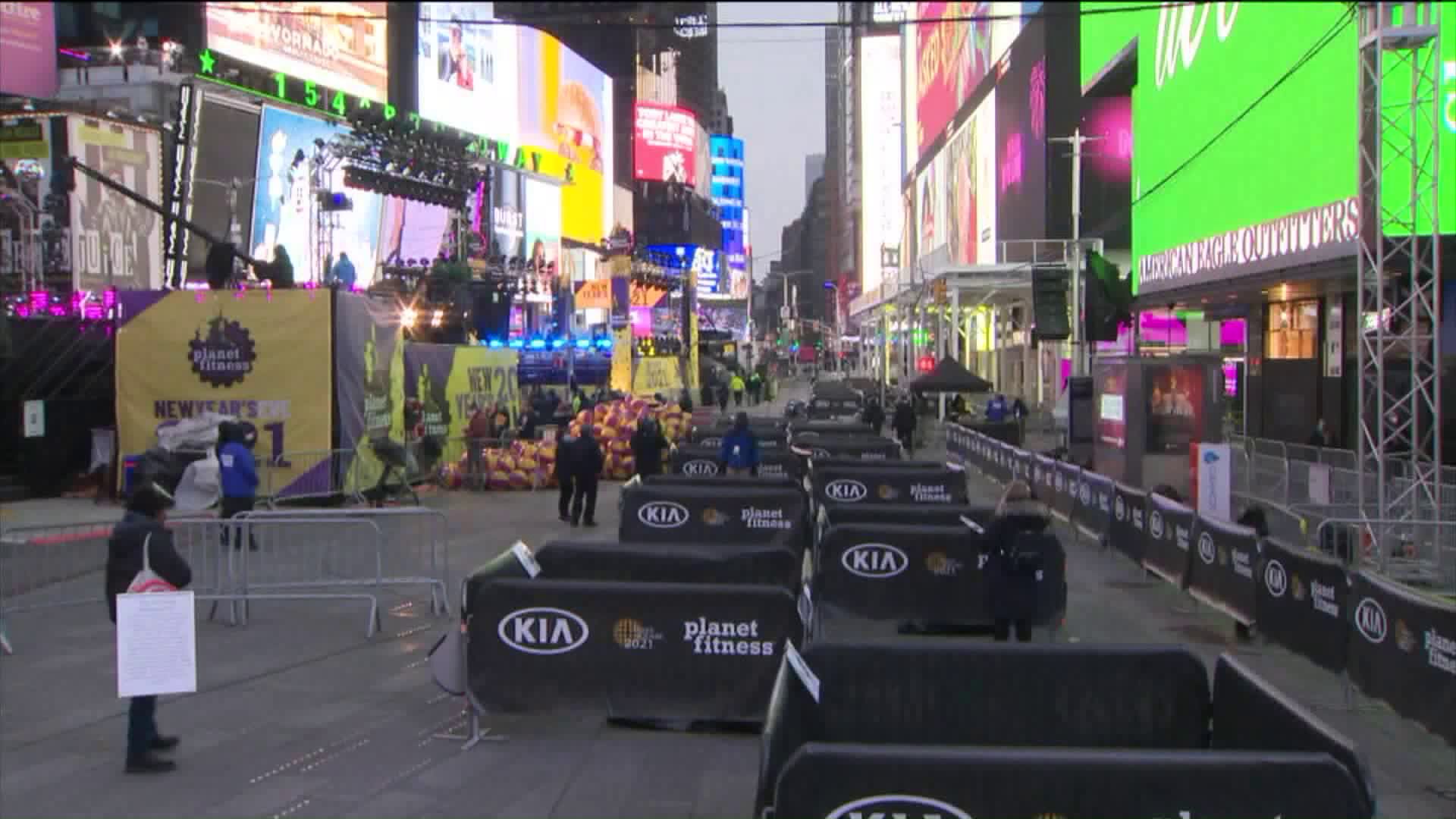 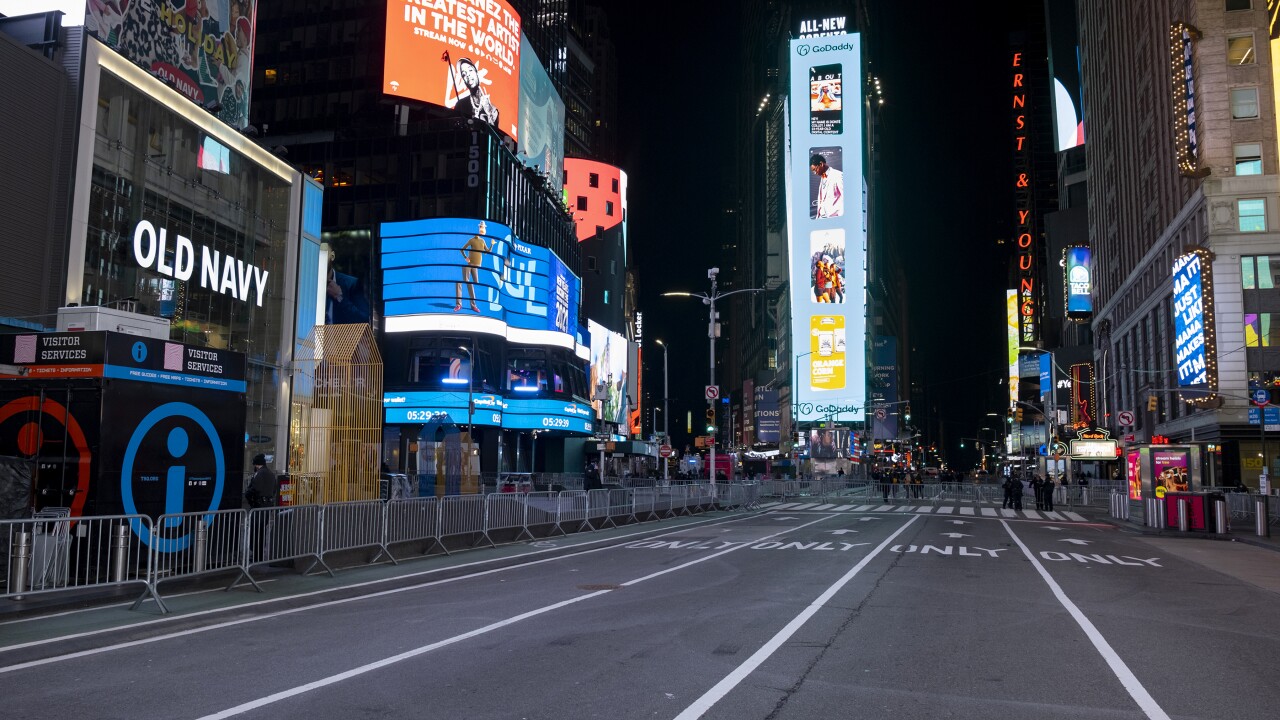 MIDTOWN, Manhattan — WATCH: You can relive the sights and sounds from the ball drop in Times Square on our Facebook page.

Gone were the revelry and shoulder-to-shoulder crowds that typify Times Square on New Year's Eve, replaced by empty streets and an eerie quiet as the final hours of 2020 ticked away.

This was New Year's Eve in the age of COVID-19.

Crowd control gave way to crowd prevention, as police closed the Crossroads of the World to vehicles and onlookers hoping to catch a glimpse of the glittering, crystal ball that still descended down a flagpole to mark the stroke of midnight. Would-be partygoers were urged to watch the ball drop on television.

Still, throngs of tourists crowded around the police perimeter, which took on the feel of a tailgate as midnight neared. Many said they wanted to end a challenging year on their own terms — and groused that they couldn’t get closer to the storied ball.

Even a group of a National Guardsmen engaged in fighting the coronavirus since March was denied entry.

“It just would have been great to ring in 2021 the New York way,” said Billy Merola, a Marine from Long Island.

The turning of the calendar, he said, “provides hope.”

Preparing for the worst, the New York Police Department deployed its bomb-sniffing dogs and sand-filled sanitation trucks intended to guard against explosions. But the department’s playbook included an unusual mandate this year: preventing crowds of any size from gathering in Times Square.

“It makes me a little bit sad,” said Cole Zieser, who recently moved to New York City. “It’s just not going to be what we wanted, what everyone dreams about in New York.”

The coronavirus has upended public life for months, and New Year’s Eve proved no different for a city that’s counted over 25,000 deaths blamed on the virus. The blocks surrounding the ball drop were blocked off, leaving a scene that Police Commissioner Dermot Shea described as “surreal.”

“It’s dead,” said Ali Jameel, who owns a store a block from Times Square. “We are dreaming for it to come back again like before.”

Despite the restrictions, Mayor Bill de Blasio vowed that New Year's Eve “would be a joyous night, if ever there was one. Goodbye, 2020. Here comes something better: 2021.”

The NYPD announced a two-part freeze that became more expansive at 3 p.m. Even guests at five hotels in the area were told to stay inside.

Juanita Holmes, chief of patrol for the NYPD, urged people to ring in 2021 “from the comfort of your home.”

“Coming to Times Square is a family tradition for some. It is a bucket list item for others. But this year is different,” she said. “I can’t emphasize enough how important it is for everyone to stay home.”

The Police Department still rolled out heavy weapons teams, explosive-sniffing dogs, drones and sand trucks. But it also planned a drastically scaled-back presence in Times Square, including an 80% reduction in its typical workforce assigned to the area.

“We always have to prepare for the worst in terms of counterterrorism overlays,” Shea said, "but the crowds will not be like they were in other years.”

This year's celebration will indeed unfold without the usual throngs of cheering, kissing revelers. The event’s special guests, first responders and essential workers, were expected to watch the festivities from a private, well-spaced area.

“It’s almost like a ‘Seinfeld’ episode,” Shea said, invoking the 1990s “show about nothing.”

“This is a ball drop about nothing, where you can’t see," he said, "so you may as well stay home.”