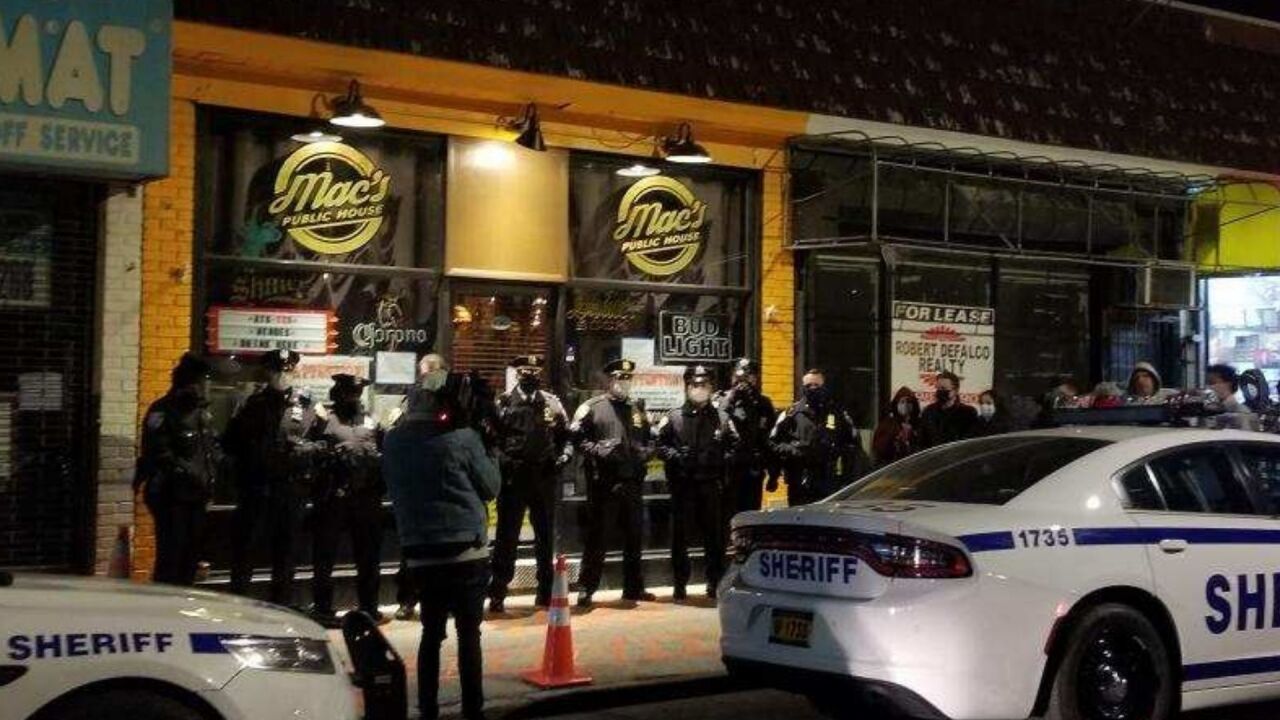 NYC Sheriff's Office
Deputy sheriffs from the New York City Sheriff's Office stand outside Staten Island bar Mac's Public House after the establishment was shut down Tuesday, Dec. 1, 2020 for violating multiple COVID-19 restrictions for a business in an orange zone.

The Sheriff's Office initiated surveillance around 4:40 p.m. at Mac's Public House on Lincoln Avenue after the business had received numerous complaints for indoor dining in an orange zone and operating past the 10 p.m. curfew, officials said.

A sign seen on the bar's window referred to the business as an "autonomous zone."

Of the course of an hour, deputy sheriffs witnessed multiple patrons enter the bar and remain inside.

Authorities said plain-clothes deputies then went in, were seated at an indoor table and were able to order food and alcoholic beverages in exchange for a mandatory "donation" of $40.

They witnessed multiple patrons also consuming food and drinks while seated inside, according to the Sheriff's Office.

At 5:40 p.m., deputies entered the establishment through the unlocked front door and found 14 people inside the bar, the majority of which were seating indoors while eating and drinking.

The Sheriff's Office said the deputies issued appearance tickets to multiple Mac's Public House employees, including a bartender and cook, for various violations of city and state laws.

Co-owner and manager Daniel Presti was arrested for obstructing governmental administration when he refused to leave the business, officials said.

Presti, 34, was taken to the Sheriff's Office, issued appearance tickets and released from custody, according to authorities.

BREAKING: Mac’s Public House on Staten Island has been shut down by NYC Sheriff’s.

This is the NYC bar that defied Governor Cuomo’s mandate@PIX11News pic.twitter.com/0keK8WW6or

PIX11 video showed about a dozen officers lined up in front of the bar, blocking patrons, with the bar closed behind them.

The Sheriff's Office said a crowd of about 50 people showed up to protest the shut down. They were described as "verbal but peaceful."

Notable critic of social distancing rules Heshy Tischler was seen on video berating the officers and yelling criticisms of local and state leaders.

No injuries were reported and no other arrests were made.