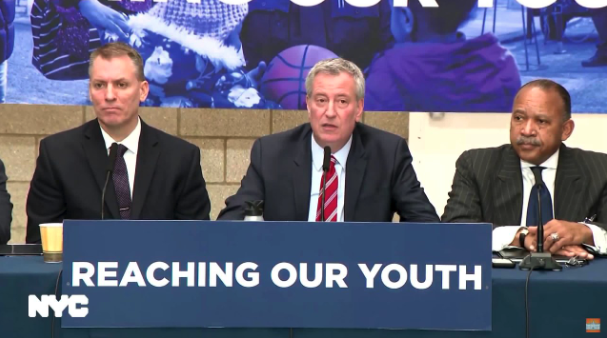 NYPD officials are grappling with a spike in serious crimes across New York City, Police Commissioner Dermot Shea said Tuesday. Felony crimes in January rose 16.9% compared to the same time period in 2019, according to NYPD data.

Felony crimes in January rose 16.9% compared to the same time period in 2019, according to NYPD data.

“That’s a real cause for concern,” Mayor Bill de Blasio said at a news conference on January crime statistics on Tuesday. “We take it seriously.”

The crime increase comes on the heels of a recently enacted state bail reform law, which Shea and de Blasio said poses a new challenge for the police department.

"We have seen examples of people getting released post-Jan. 1 and then getting arrested," Shea said at the news conference. “Laws come and laws go, and we adapt.”

Advocates, however, argue it's too early to connect crime statistics to the law.

"As any serious person knows, one month of data cannot tell us anything meaningful about crime trends," Tina Luongo, with the Legal Aid Society, said in a statement Tuesday. "This is just more irresponsible misinformation from NYPD Commissioner Dermot Shea and other opponents of bail reform happy to ignore reality when it doesn’t serve their agenda. The fact remains that crime is at all-time historic lows, and has been consistently low even as release rates from pre-trial detention have steadily risen."

The NYPD is also focusing on a new youth initiative that de Blasio believes will help drive serious crimes back down.

Beginning this spring, new youth coordination officers will be added to the NYPD's Neighborhood Policing program in an effort to overhaul how cops interact with children and teens.