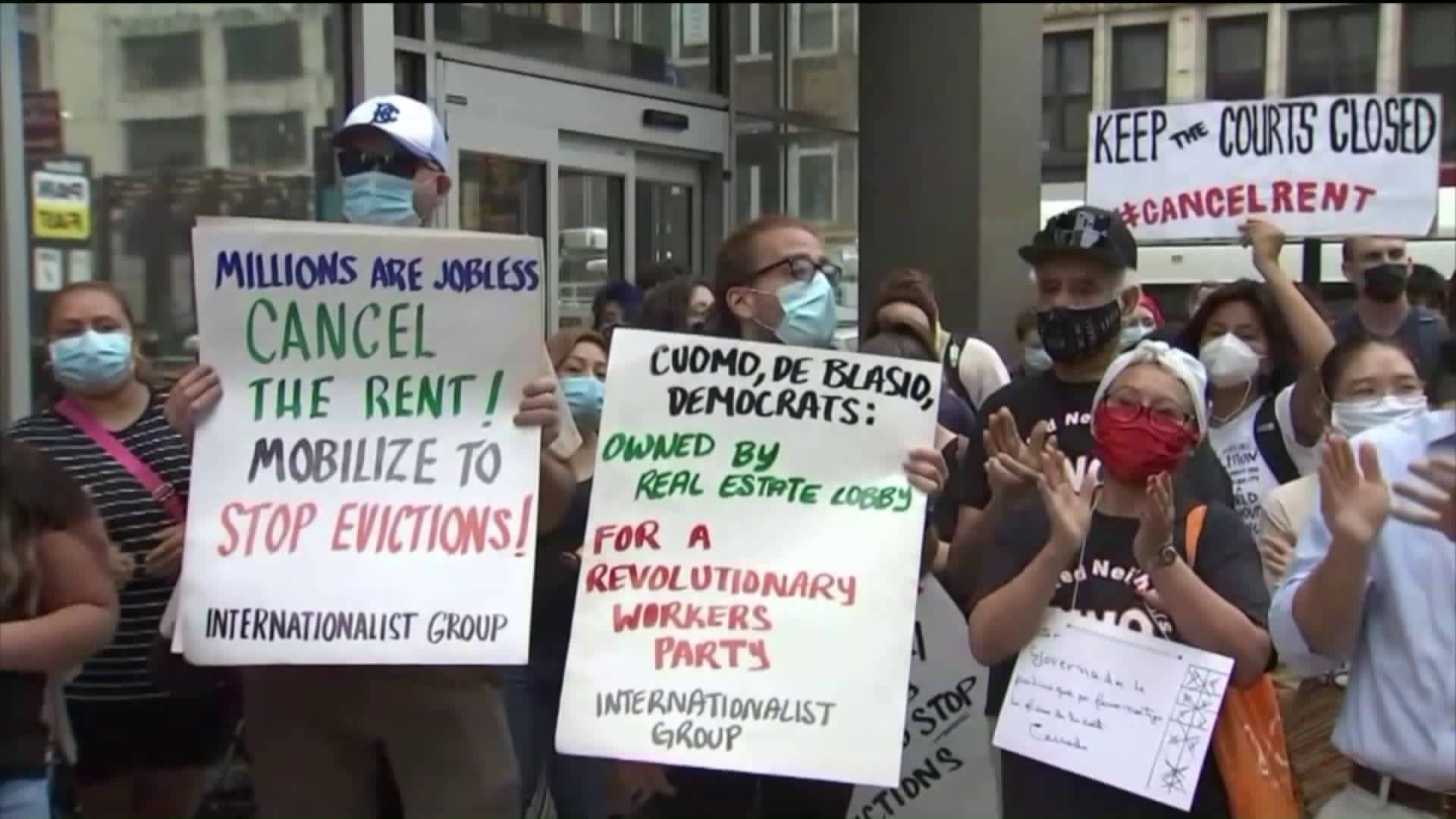 Thousands of New Yorkers breathing a sigh of relief after Governor Cuomo extended a moratorium on evictions late Wednesday night, but they're not out of the woods just yet.

NEW YORK — Thousands of New Yorkers breathing a sigh of relief after New York Gov. Andrew Cuomo extended a moratorium on evictions late Wednesday night, but they're not out of the woods just yet.

Now, lawmakers are calling on further protections to give renters some peace of mind as they try and get through the pandemic.

For the third straight day tenants rights groups protested in downtown Brooklyn on Thursday. Protesters called on the city and state to cancel rent in the middle of the pandemic. While they'll eventually have to pay their landlords, for now at least, Gov. Cuomo gave past due renters a reason to exhale.

"No evictions as long as we are in the middle of the epidemic," Cuomo said. "I had done that right away by executive order, I then extended it by executive order, the legislature then came back into session. We then wrote it into the law, I signed the law and the law is clear. "

Cuomo emphasized this point by adding that it would continue "until I say COVID is over."

The governor signed an executive order extending the moratorium on evictions until September 4 but he left it up to the courts to enforce.

Now, it's up to the Office of Court Administration to decide whether or not they'll accept the executive order.

But State Sen. Zellnor Myrie says it's not enough security and stability for renters.

Myrie proposed legislation that would extend the eviction moratorium for one year from when the state of emergency is over. The bill would also provide relief for owners of small property and small businesses.

"We don't know what the pandemic is going to look like but what we do know is that the recovery will be much much longer," Myrie said.

Under the law, 14,000 families still face eviction from warrants issued before the pandemic. Other tenants could face eviction if their leases expire.

Mayor Bill de Blasio says he will do everything in his power to prevent people from getting evicted and suggested creating a payment plan for those who simply can't make the rent.

"Allow them to pay the rent over time when they finally have resources, but no one should be put out on the street when they can't pay, they literally can't pay," said Mayor de Blasio.

One idea the mayor floated to keep people in their homes was to prevent the Marshals Office from carrying out evictions. It's still unclear if the Mayor has the power to issue that order, but he said his office is looking into it.