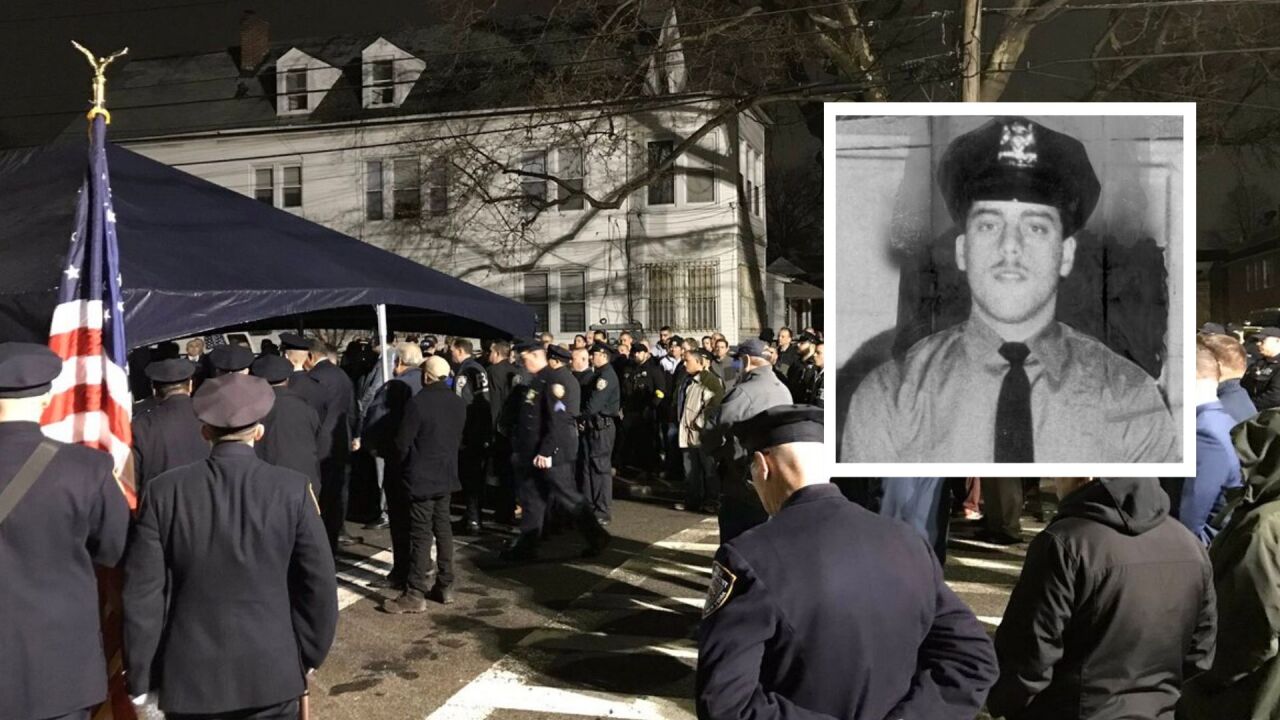 JAMAICA, Queens — The assassination of 22-year-old rookie NYPD Officer Edward Byrne on February 26, 1988 was so stunning that it forced the NYPD—and the nation—to seriously confront the crack cocaine gangs that were taking over public housing and street corners at the time.

The four men convicted of firing five shots into Byrne's parked patrol car on Inwood Street in South Jamaica, Queens, said they’d received the order to kill a cop from one of their drug bosses, Pappy Mason.

“He (Pappy) basically called the lieutenant of his violent crack gang and said, 'We need to send a message. They take one of us, we take one of them.'"

This year, 32 years later, the Byrne anniversary took on urgent significance, just weeks after a Bronx shooter allegedly tried to assassinate two uniformed officers within a span of 12 hours.

Police Commissioner Dermot Shea took part in the annual vigil early Wednesday at the corner of Inwood Street and 107th Avenue, the exact spot where the bullets ripped into the rookie officer at close range, when four men crept up on the vehicle, one of them distracting Byrne from the passenger side.

"Gang-ordered, the execution stunned our city and nation," Shea said at Wednesday morning’s gathering, "changing the course of American policing."

It's been 32 yrs since NYPD Officer Eddie Byrne was assassinated while sitting in his patrol car in Queens. Gang-ordered, the execution stunned our city and our nation, changing the course of American policing.

Today, and every day, we honor our vow to #NeverForget Eddie. pic.twitter.com/iWBhsuFgod

The vigil, which started about 12:30 a.m. and featured a eulogy from Police Benevolent Association President Patrick Lynch, has been held every year since Byrne was assassinated, drawing retired officers who worked with the young cop—and rookies who weren’t even born when Byrne lost his life five days after his 22nd birthday.

Byrne had only worked at the 103rd Precinct for a month.

The young officer was guarding the home of a frightened drug witness whose home had been firebombed.

Prosecutors convicted Phillip Copeland of delivering the order to hit a cop, Todd Scott of being at the window to distract Officer Byrne, David McClary for pulling the trigger, and Scott Cobb for being the getaway driver.

They split $8,000 for their violent efforts.

They were caught a week later, some of them hiding out in a basement in Hollis, Queens.

Six months later, the FBI joined the NYPD for a massive round up of the “Fat Cat” Nichols family, which was bagging and selling crack cocaine vials from homes across south Queens.

Lawrence Byrne pointed out the annual murder rate In New York City hovered around 2,000 in 1988, when his younger brother was assassinated, with more then five thousand shootings a year.

Byrne is now gearing up for upcoming parole hearings in October, when the convicted killers will seek freedom again after 32 years behind bars.

Lawrence Byrne appears before the parole board every two years to make a victim impact statement on behalf of his parents and family.

Police Officer Eddie Byrne was assassinated in 1988 while he sat in his NYPD patrol car. Today, 32 years later, cops gather to celebrate his life and the tremendous impact his sacrifice has had on behalf of all law enforcement and those we continue to keep safe. #NeverForget pic.twitter.com/bl4DuLMlVU