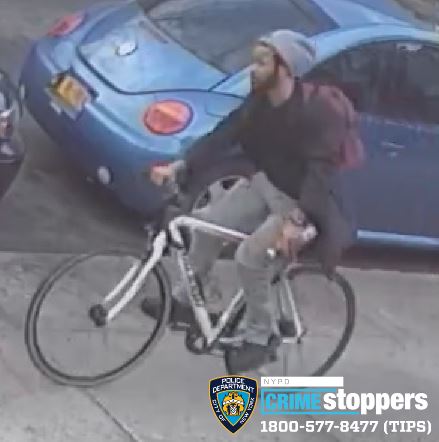 QUEENS — A man is wanted for assaulting a woman in Queens Saturday, police said.

The incident took place at around 11:20 a.m. on 68 Street. A 44-year-old woman was approached by the man on the bike who struck her in the face with a hard object in a random and unprovoked attack. The victim suffered laceration to the mouth that caused bleeding and pain.

The attacker fled south on 68th Street. EMS responded and took the victim to Elmhurst General Hospital in stable condition.

The man wanted is described as between 20 and 30 years old and last seen wearing a dark jacket and gray pants.

Anyone with information in regard to this incident is asked to call the NYPD's Crime Stoppers Hotline at 1-800-577-TIPS (8477) or for Spanish, 1-888-57-PISTA (74782). The public can also submit their tips by logging onto the CrimeStoppers website at WWW.NYPDCRIMESTOPPERS.COM, on Twitter @NYPDTips. All calls are strictly confidential.