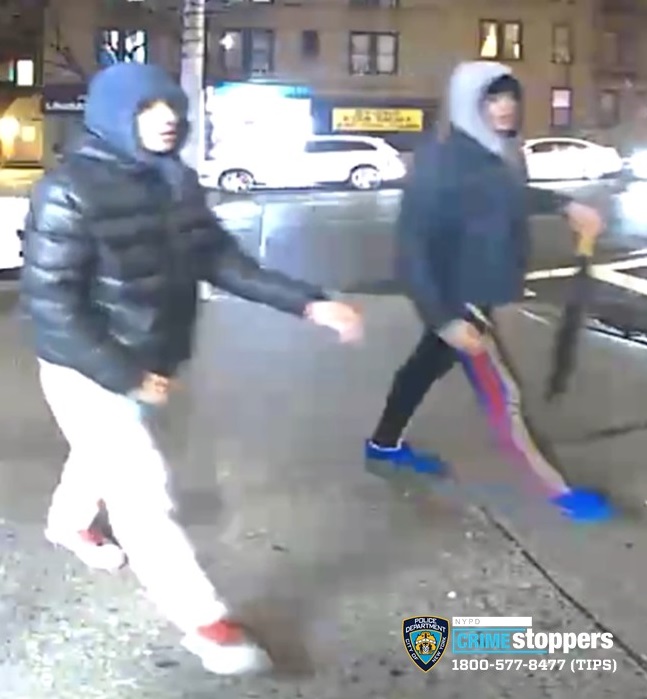 WOODSIDE, Queens — Two men are wanted in connection with a series of three robberies in the Woodside section of Queens this past week, police said.

The first incident took place Saturday at around 7:50 p.m. in front of a building on 64th Street, authorities said. A 33-year-old man was walking on the sidewalk when he was grabbed from behind by the two unidentified men. One of them punched the victim in the abdomen and removed his wallet containing $70 before fleeing.

The second incident happened just 90 minutes later at 9:20 p.m. A 32-year-old man was walking near 38th Avenue when the men came from behind, grabbed him and threw him to the ground. The men took his wallet and cell phone before fleeing.

The third incident took place Tuesday at 8:20 p.m. on 61st Street. A 35-year-old man was in the area when the men choked him from behind with an umbrella. They fled with the victim's cell phone and his wallet, containing $20.

None of the victims were injured.

Anyone with information in regard to the identities of the males is asked to call the NYPD's Crime Stoppers Hotline at 1-800-577-TIPS (8477) or for Spanish, 1-888-57-PISTA (74782). The public can also submit their tips by logging onto the CrimeStoppers website at WWW.NYPDCRIMESTOPPERS.COM , or on Twitter @ NYPDTips. All calls are strictly confidential.