Over 200 arrests amid protests in Brooklyn, Manhattan: NYPD 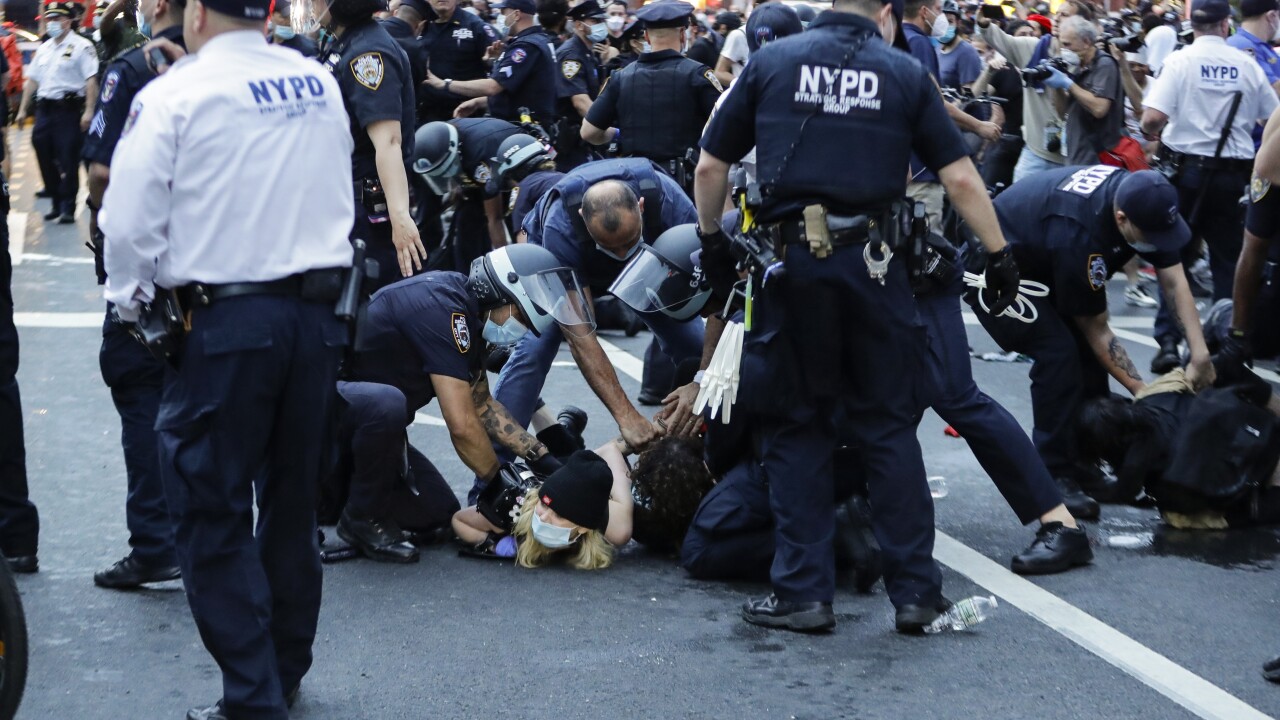 Frank Franklin II/AP
Police arrest protesters during a rally on Friday, May 29, 2020, at the Barclays Center in Brooklyn over the death of George Floyd.

NEW YORK CITY — More than 200 arrests were made Friday during several demonstrations in Manhattan and Brooklyn over the police custody death of George Floyd in Minneapolis, according to the NYPD.

In Brooklyn, over 3,000 people gathered near the Barclays Center before splintering off into smaller protests, some of which devolved into clashes with officers and the destruction of police vehicles.

Protesters chanted and threw water bottles at police outside the Barclays Center. Police sprayed an eye-irritating chemical into the crowd multiple times, then cleared the plaza.

A molotov cocktail was hurled at an NYPD van with four officers inside, NYPD Commissioner Dermot Shea said. Two women are facing charges in connection with the incident, according to police.

"It is by the grace of God … that we don’t have dead officers today," Shea said on Saturday.

Mayor Bill de Blasio, during a news conference Saturday morning, vowed there would be a independent review of police-protester interactions, but added that the city and NYPD have zero tolerance for violence on both sides.

"I want to know exactly what happened, why it happened and what can be better," the mayor said. "We’re working to ensure the protests in the days to come will be peaceful."

Later Saturday, Gov. Andrew Cuomo announced he will ask state Attorney General Letitia James to investigate what happened and release a report to the public. The decision was made after speaking with de Blasio, according to the governor.

"The public deserves answers and accountability," he added.

City Council Speaker Corey Johnson took a more stern approach to the NYPD’s response Friday night, saying: “How did we go from a peaceful protest to what transpired tonight? We failed to de-escalate. The NYPD should be easing tensions, not pepper spraying state legislators and shoving peaceful protestors. Tonight was a failure of leadership.”

“I am so angry and frustrated at what happened in Brooklyn tonight. We knew New Yorkers were planning to protest tonight. We understand why they needed to voice their anger and their pain,” Johnson also tweeted.

How did we go from a peaceful protest to what transpired tonight?

We failed to de-escalate. The NYPD should be easing tensions, not pepper spraying state legislators and shoving peaceful protestors.

Tonight was a failure of leadership. 2/2

Earlier Friday, the day of protests began in lower Manhattan’s Foley Square, where Gwen Carr, the mother of Eric Garner, who died in NYPD custody in 2014, addressed thousands of people. She called for justice in the name of her son, and in the name of Floyd.

After a couple of hours of speeches, the crowd marched to One Police Plaza, the headquarters of the NYPD.

After demonstrating there, they headed to the district attorney's office, and the city courts.

Police told protesters to stay out of the street and several arrests were made.

Floyd died on Memorial Day after a police officer knelt on his neck for nearly nine minutes during an arrest that was caught on bystander video.

The officer can be seen unrelentingly putting pressure on Floyd's neck as he pleaded for him to get off, saying, "I can't breathe."

The phrase uttered by Floyd echoes the last words of Garner, who's recorded police custody death on Staten Island in 2014 became a rallying cry for the Black Lives Matter movement.

The officer, Derek Chauvin, was fired from the police force earlier this week and was charged with murder on Friday.

Protests are expected to continue Saturday, with at least three demonstrations planned in New York City.