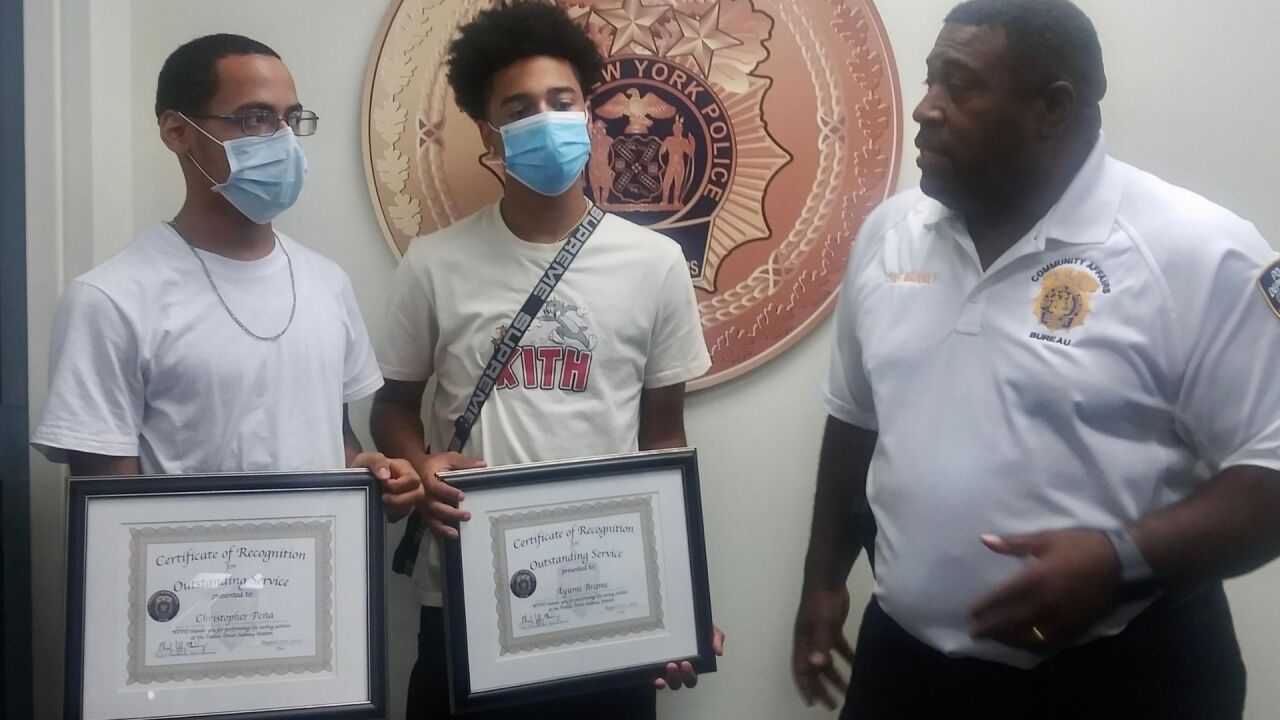 NEW YORK — The NYPD chief tasked with improving relations with the city’s Black and Brown communities hosted two, 18-year-old New Yorkers for lunch Friday at One Police Plaza, apologizing to them after their good deed on July 28 was initially treated with suspicion.

Jeffrey Maddrey, the department’s new Chief of Community Affairs, invited the teens, after hearing about their act of kindness at the Barclay Center/ Fulton Street train station last month.

Ayumi Brame, 18, and his friend, Chris Pena, were heading home on the subway to the Bronx area after playing in a baseball game on Staten Island July 28.

They had to transfer at the Barclay Center to catch the No. 4 train.

As they walked down the stairs, they noticed a young, white man in his 20’s sprawled on the steps. Brame thought “he looked dead.”

“People were going past him like he didn’t even exist,” Brame recalled to PIX11 News Sunday night.

Brame and Pena decided to stop and help the man, who had a syringe laying on top of his chest.

“I feel like that was the right thing to do,” Brame told PIX11.

The two teens said they tried to wake the unconscious man up and then noticed he was “gurgling at the mouth.”

So, they called 911 and waited for police and Emergency Medical Services to arrive.

The teens later told Brame's mother, Madeline Brame, that the officers approached the scene slowly and cautiously, “as if the two somehow had something to do with the young man laying ‘dead’ on the steps.”

After the teens told the officers they had called 911 for help, they said they were told to go on their way.

Not long after, Brame's mother was invited to an anti-violence Town Hall in Harlem.

Chief Maddrey was in attendance at the Town Hall and opened the floor up for dialogue.

Brame told the chief about her son and his friend Chris Pena and the help they gave to a stranger at the Barclay Center on July 28.

She said the chief’s staff immediately got her contact information.

This past Friday, Ayumi Brame and Chris Pena had lunch with the chief at Police Headquarters.

After a nice meal, the two teens received Certificates of Recognition for Outstanding Service, acknowledging them “for performing life-saving action at Fulton Street” on July 28.

The chief apologized to the teens if the officers seemed mistrustful of them.

Madeline Brame was at the lunch and quoted the Chief.

“He said that maybe the police have to learn to be more caring and sensitive in situations like that," she said.

The young man assisted by Ayumi Brame and Chris Pena apparently survived his overdose, but Madeline Brame told PIX11 Sunday evening she suffered an overdose tragedy in her immediate family 104 days ago.

“I lost another son due to an accidental overdose of cocaine laced with Carfentanil at his home in Long Island," she said. "He was 26 years old.”