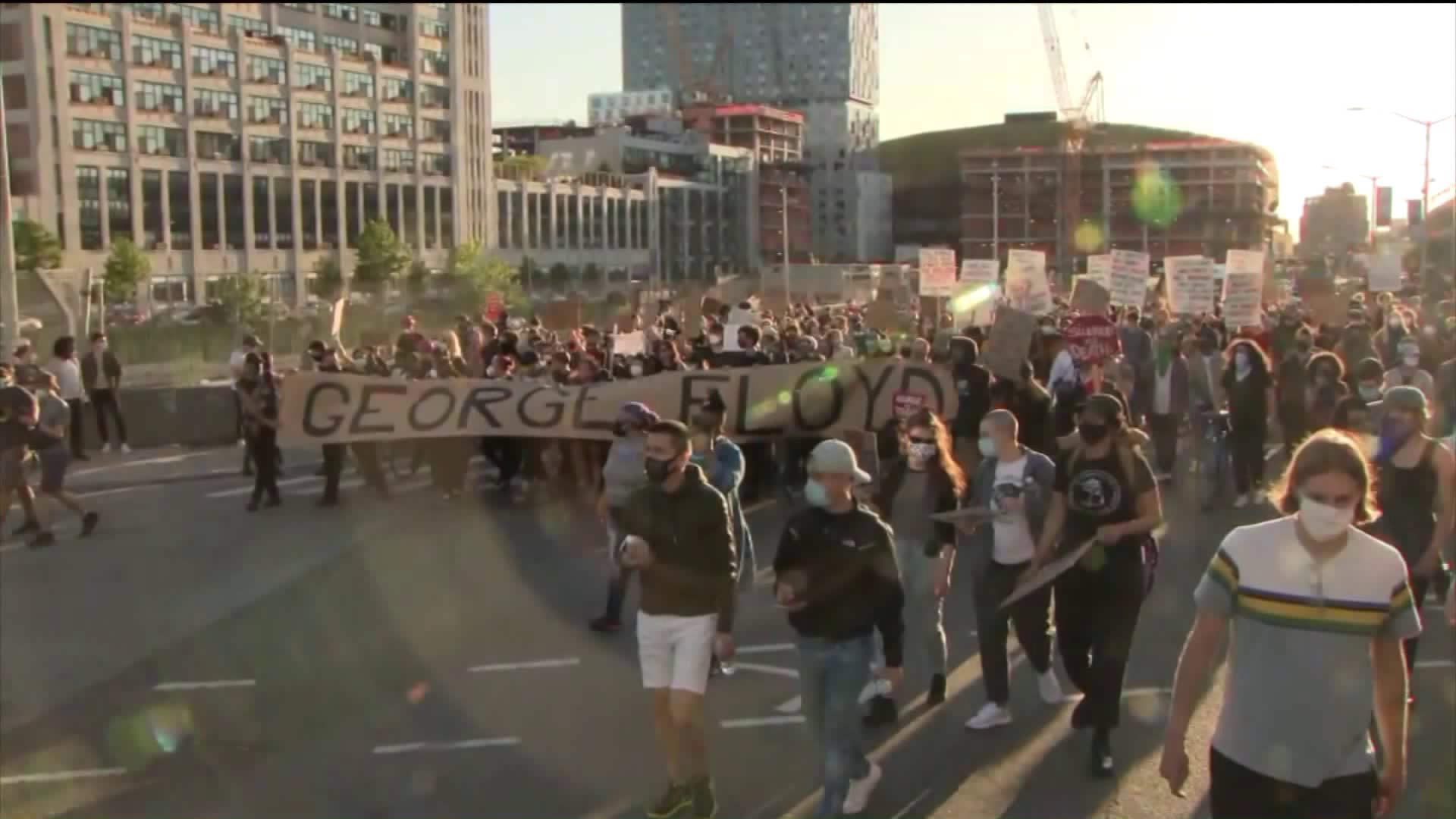 After a day of mostly peaceful protests, over 250 people were arrested in New York, police said. Video shows officers swarm the area around the Barclays Center in Brooklyn late Sunday night. One protester was shoved down stairs and video showed objects being hurled at police in the area. 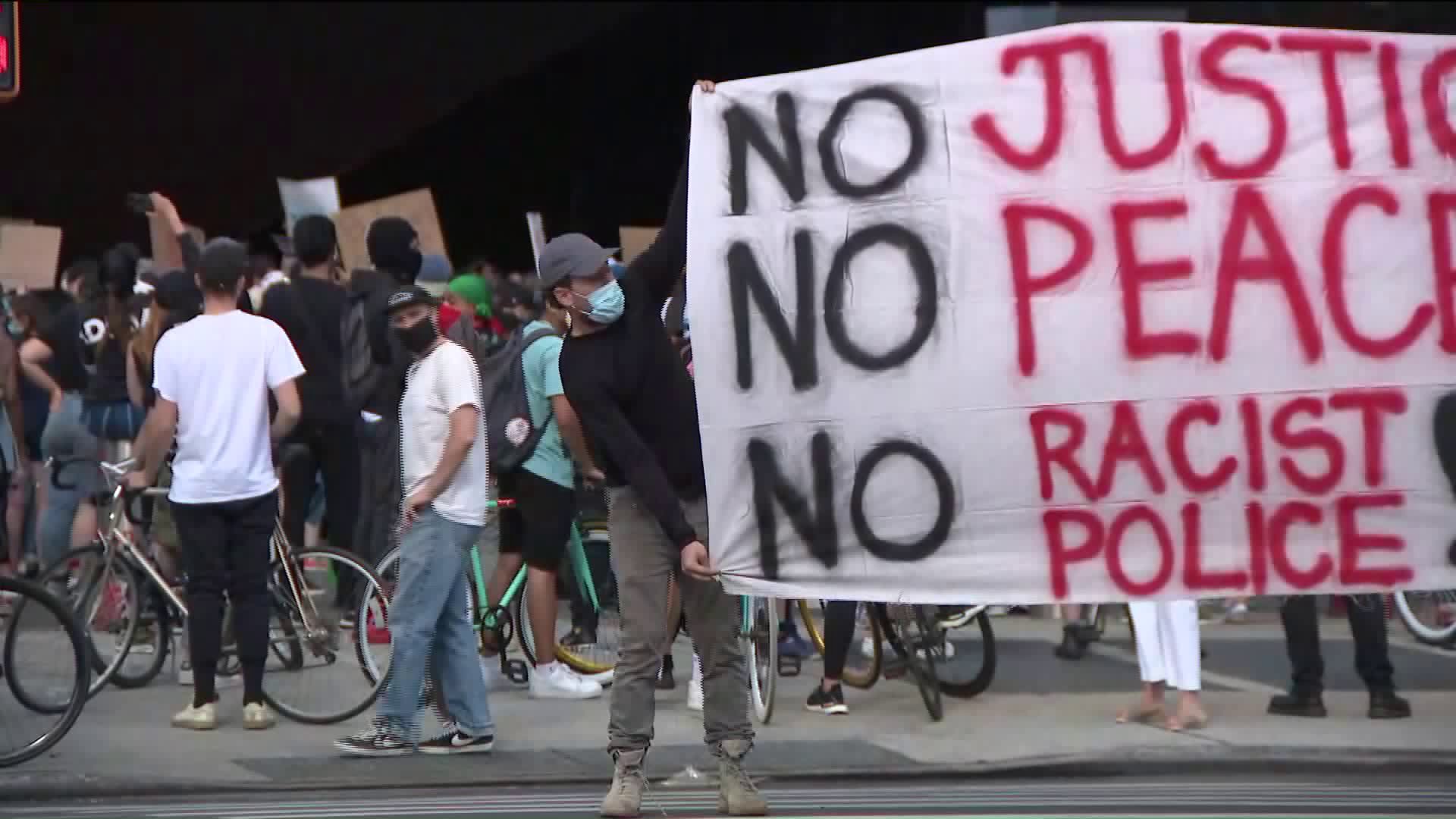 BROOKLYN — After a day of mostly peaceful protests, hundreds of people were arrested in New York, officials said.

According to Police Commissioner Dermot Shea, over 400 arrests were made and six officers were injured Sunday, however none were serious. The NYPD said about a dozen police vehicles were damaged.

Video shows officers swarm the area around the Barclays Center late Sunday night. One protester was shoved down stairs and video showed objects being hurled at police.

Mayor Bill de Blasio was in the area.

"Just checked on situation around the Barclays Center," he tweeted. "Lots of protesters moving around and plenty of police presence."

"What?! You aren’t seeing the same thing as everyone else tonight," he tweeted.

New York City officials had looked for a peaceful way forward as the city entered the fourth day of protests against police brutality.

De Blasio said Sunday that city police showed “tremendous restraint overall” but that he was concerned about video showing two police cruisers lurching into a crowd of demonstrators on a Brooklyn street. He was appointing two city officials to conduct an independent review of how the protests unfolded and how they were handled by the police.

Thousands of people on Sunday again marched through multiple neighborhoods, chanting, kneeling in the street, and falling silent for a minute in front of the police station in Times Square in honor of people killed by police.

Duncan Anikwue was one of the protesters calling for change.

By 7 p.m. over 500 people had gathered at the Barclay’s Center for a peaceful demonstration.

Patricia Brown, who's lived in Brooklyn her whole life, pleaded with the community for calm.

"We will get nowhere with violence," Brown said. "It has to be love. Love is what conquers all.”

At Flatbush and Bergen in Brooklyn, a crowd of protesters shouted “let him go” at a group of officers after police took away a protester.

New York City police said 345 people were arrested, 33 officers were injured and 27 police vehicles were damaged in Saturday's protest. There were no major injuries reported.

Community activist Peter Jones said the NYPD is "out of control."

"We need accountability and we need justice," Jones said.

On Saturday, fires burned, windows got smashed and dangerous confrontations between demonstrators and officers flared amid crowds of thousands. The day that began with mostly peaceful marches through Harlem and neighborhoods in the Bronx, Brooklyn and Queens, but it descended into chaos as night fell.

Officers sprayed crowds with chemicals, and video showed two police cruisers lurching into a crowd of demonstrators, knocking several to the ground, after people threw objects at the vehicle.