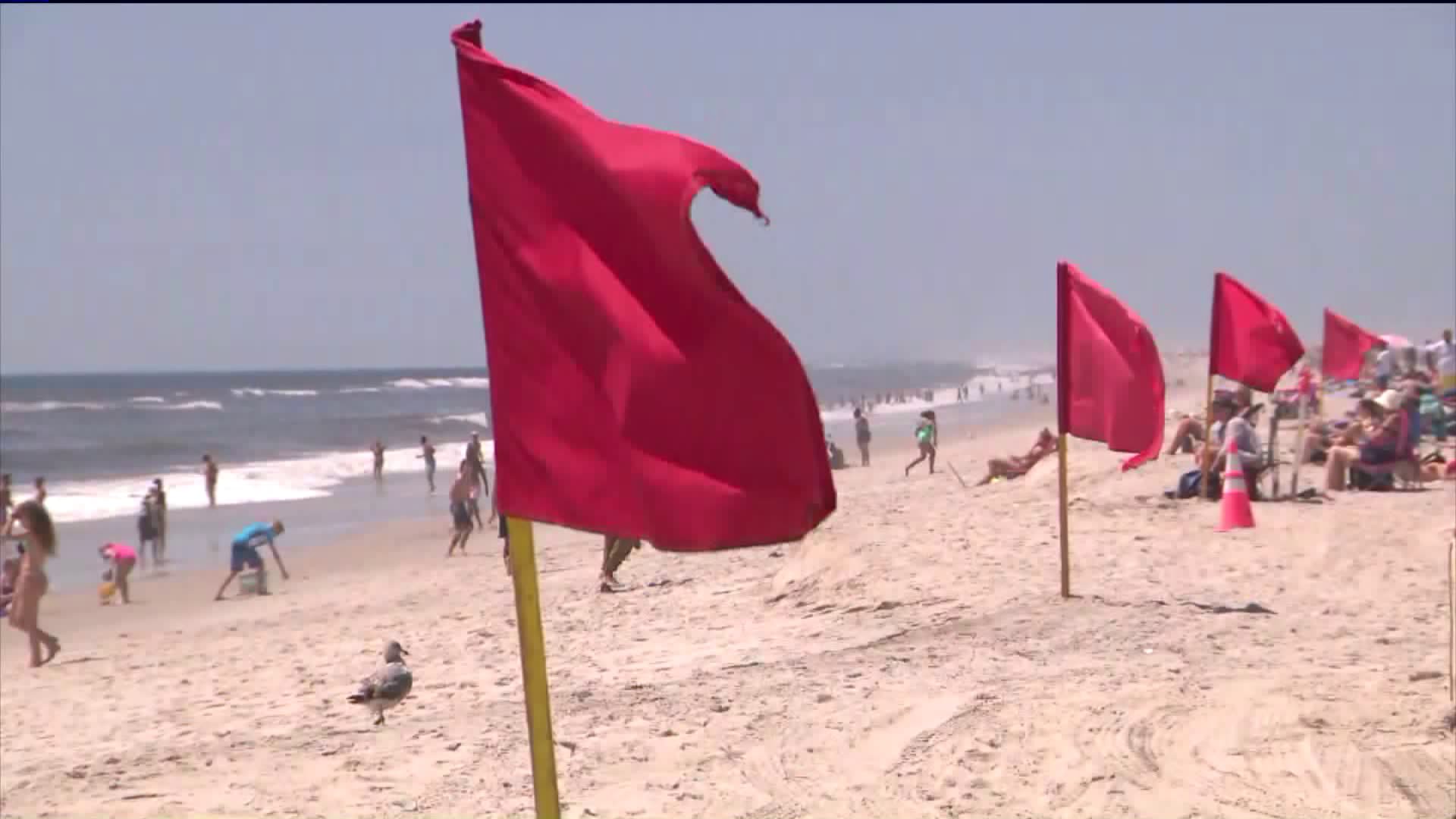 From Long Island to the city, officials are warning residents to prepare for a serious storm.

JONES BEACH, Long Island — HUrricane Isaias will arrive in the tri-state region Tuesday morning, but the storm's effects are already creating hazards in some parts of the New York City metro area, particularly near the coast.

On Long Island, in the same waters where sharks kept swimmers on shore for much of last week, a new danger lurks. The chief executive in Nassau County pointed it out Monday morning.

"We have dangerous rip currents," County Executive Laura Curran said at a news conference to prepare residents for the storm and its effects.

The reason for the rip currents was simple, she said. "It is the storm."

The storm was upgraded from a tropical storm Monday evening.

Monday was a sunny day, with few clouds, and a moderate, but sustained sea breeze. Those conditions led to many of the parking lots at Jones Beach shutting down temporarily because they were full to capacity.

Samantha Chan and her friends managed to get a spot after driving over from Brooklyn.

The steady winds and unsteady waters of the Long Island coast were set to only get worse over the next 48 hours, as residents and officials pointed out.

Joyce Merzbacher, a North Shore resident, summarized her main focus of storm preparation in one word.

"Batteries," she said, and added that she and her family were "making sure batteries and the flashlights are handy."

Merzbacher's daughter, Laurene Fleischer, added that preparations for a loss of electricity were apparently on a much larger scale.

"We did see a lot of trucks on the highway on our way here," Fleischer said. "There was a whole line of the utility trucks."

Wind gusts in the 70 mile an hour range may knock out power. PSEG has said that it's ready to repair outages, and has encouraged people to monitor its website or app regarding getting power restored.

Meanwhile, in New York City, the Office of Emergency Management is advising residents to plan ahead and bring inside all loose, lightweight objects, such as lawn furniture, garbage cans and yard debris. Residents should also anchor objects that cannot come inside, such as gas grills or propane tanks, said Deanne Criswell, the city's director of emergency management.

When preparing for potential flooding, keep in mind it is never safe to drive or walk into flood waters, Criswell said at a Monday morning news conference. "It only takes 6 inches of fast-moving water to knock an adult off their feet, or 12 inches of water to carry away most cars," she warned.

While the city will not be activating any evacuation orders for Isaias, Criswell said now is a good time for New Yorkers to learn which evacuation zone they live in.

New York City is divided into six hurricane evacuation zones. Residents can find out their specific zones, and get other hurricane resources, by heading to nyc.gov/knowyourzone.

Criswell said it's also a good opportunity for New Yorkers to make sure they have the ability to stay informed with the latest updates from the city.

NotifyNYC – available on the website, as a mobile app or on Twitter – is the primary way OEM communicates updates with the public.

Emergency Management also recommends that each family make an emergency plan — one that also includes plans for any pets. OEM also advises to check on any other family members, friends or loved ones to make sure they're safe.

Once registered, customers can sign up to receive power outage alerts and updates on their phones.

Make sure that cellphones, and other necessary electronics, are charged in case of a loss of power, and check batteries on other necessities.

Anyone who loses service should disconnect or turn off appliances that would otherwise turn on automatically when power is restored. If several appliances start up at once, the electric circuits may overload.

Con Ed is also warning New Yorkers not to go near any downed wires and never attempt to move them or touch them with hands or any object. Be mindful that wires can be hidden by tree limbs, leaves or water.

Any downed power lines should be reported to Con Ed and to local police departments immediately.

If a power line falls on your vehicle while you're inside, stay inside and wait for emergency personnel, Con Ed advises.