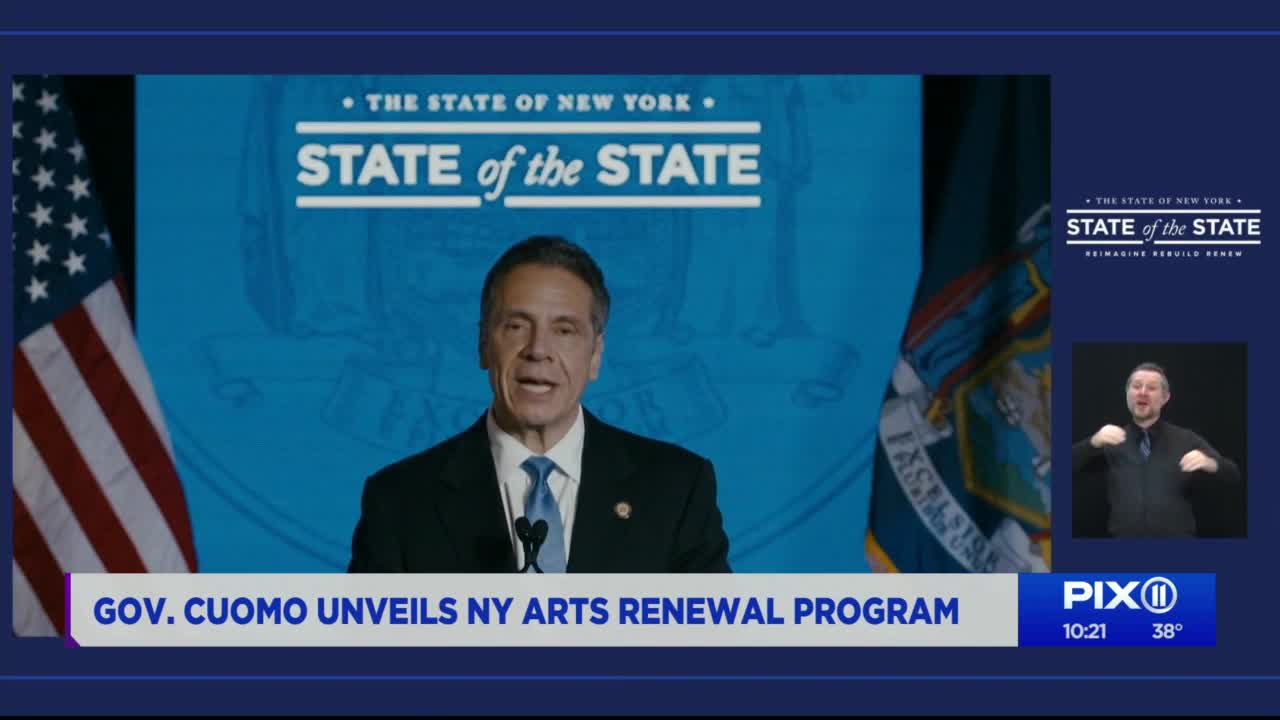 NEW YORK CITY — The show must go on: After struggling through the pandemic, the arts industry is getting a little extra support in 2021.

During his State of the State address, Gov. Andrew Cuomo announced a new initiative to help revive the industry across the state.

“Cities are, by definition, centers of energy, entertainment, theater and cuisine. Without that activity and attraction, cities lose much of their appeal," Cuomo said. "What is a city without social, cultural and creative synergies? New York City is not New York without Broadway.”

According to a report from the Broadway League, the Great White Way usually brings in more than $12 billion a year on top of ticket sales for the New York City economy. That doesn't include the Off-Broadway plays and other theaters throughout the five boroughs.

With productions frozen by the pandemic, tens of thousands of people have been out of work, which is why the governor is making the New York Arts Renewal a priority.

“One thing is clear. We must act. We cannot wait until summer to turn the lights back on for the arts and provide a living wage for artists. We will not let the curtain fall on their careers or on the future of our cities,“ Cuomo said.

To help wake up the industry, the governor announced public-private partnerships to bring a series of pop-up concerts and events throughout the state.

He's also started a pilot program to figure out how flexible venues can be used to provide socially distant performances, and he announced a partnership with the Mellon Foundation to provide grants to put more than 1,000 artists back to work while providing money for community arts organizations.

Eduardo Vilaro is the Artistic Director and CEO of Ballet Hispánico one of the organizations that will participate in the pop-up series. The organization was set to celebrate it's 50th anniversary when the pandemic hit.

Ballet Hispánico has survived with virtual events since the pandemic hit, but Vilaro has had to furlough many of the employees, which is why he is so thankful for the support from the governor.

"This initiative is really going to help catapult our city to understand the needs of arts organizations and also give a big hug to all these organizations that have lost so much during the pandemic," Vilaro said.

Cuomo also stressed the importance of getting the vaccine so we can speed up this process as quickly as possible.

Dr. Anthony Fauci has said if the vaccine rollout moves ahead as planned, he believes people will be back at Broadway shows this fall, but added patrons still need to wear a mask.