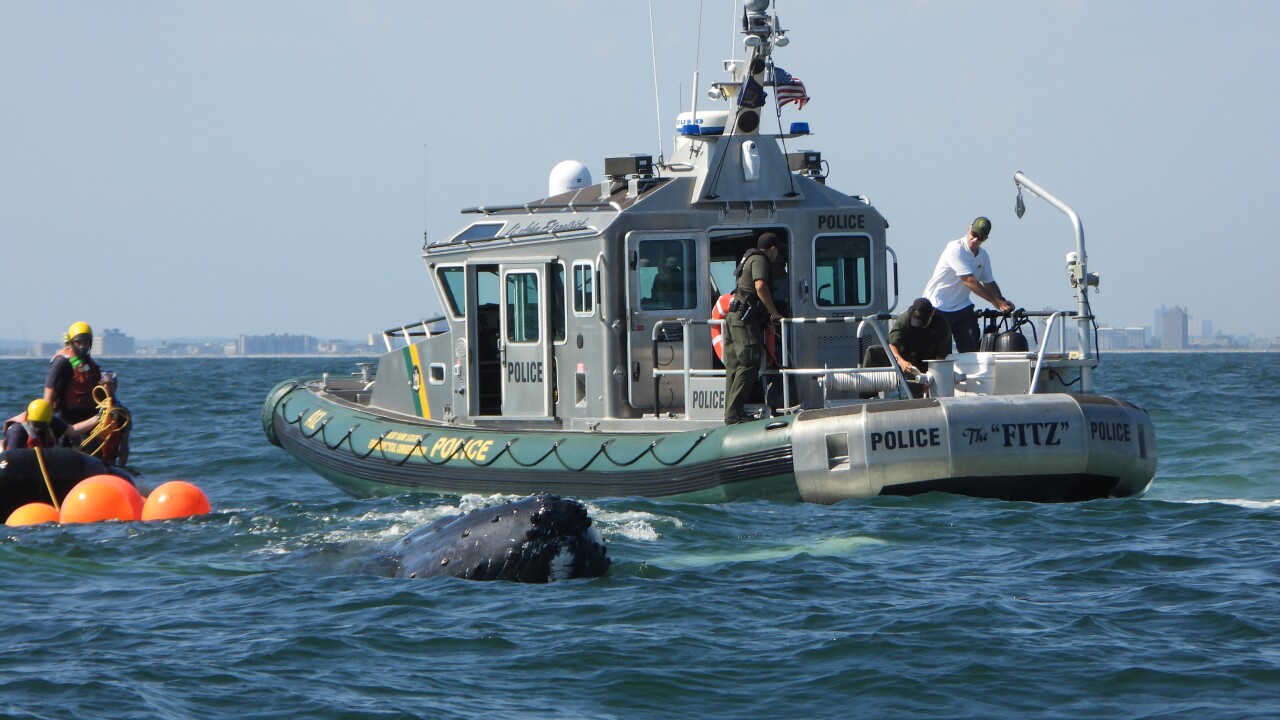 NEW YORK — A distressed humpback whale in the Ambrose Channel of New York was successfully disentangled following a multi-day collaborative response this week, according to the New York State Department of Environmental Conservation.

The disentanglement was a team effort by the NYSDEC, Atlantic Marine Conservation Society, the Center for Coastal Studies, as well as the United States Coast Guard. The whale was discovered Monday evening, looking like it was anchored in place and still able to breathe.

The whale could not "perform normal behaviors" and was at risk of being hit by a ship or attacked. It was anchored to the floor of the sea and could barely get to the surface to breathe.

The disentanglement began Wednesday morning after the Coast Guard determined the whale was still anchored. The Center for Coastal Studies disentanglement team flew from Massachusetts to New York thanks to a charitable donation. The team's boat launched out of Jones Beach.

The CCS and AMSEAS teams were transported to the scene in vessels provided by NYSDEC, and CCS staff used their inflatable vessel to attempt to disentangle the whale.

By Wednesday afternoon, the disentanglement team was able to remove multiple buoys and make cuts through pieces of entangling gear around the whale’s flukes. Despite their best efforts, the whale was still anchored in place, and the team had to leave the whale Wednesday night when it got too dark to continue safely.

Early Thursday morning, the NYSDEC vessels with the AMSEAS and CCS teams were back on the water. A research vessel from Monmouth University’s Urban Coast Institute took a team member from NOAA Northeast Fisheries Science Center’s Sandy Hook lab to the whale.

Working with the vessel and an Army Corps of Engineers Drift Collection vessel, crews used heavy equipment to secure and haul some of the heavy gear, which allowed the CCS team to make cuts that relieved pressure on the whale’s body. Around 4 p.m. Thursday, final cuts were made releasing the whale from a very large and complicated entanglement.

The teams stayed on scene to look at the health of the whale as it swam free. The visible injuries to the whale did not appear to be severe but included multiple lacerations to all body areas and some deep lacerations at its tail.

“That was among the more challenging whale disentanglement cases we have dealt with. That whale was fighting to live. All the folks we were working with on the water the last two days were fighting to help it”, said Scott Landry, CCS Director of Marine Animal Entanglement Response.

The teams, working together, saved the whale's life.

“Without intervention that whale would not have survived. While it’s not entirely out of the woods yet, it’s prospects are now 100% better than what they were. We are optimistic we will see the whale again and like the majority of humpback whales off our coast it will bear the scars of entanglement,” added Landry.