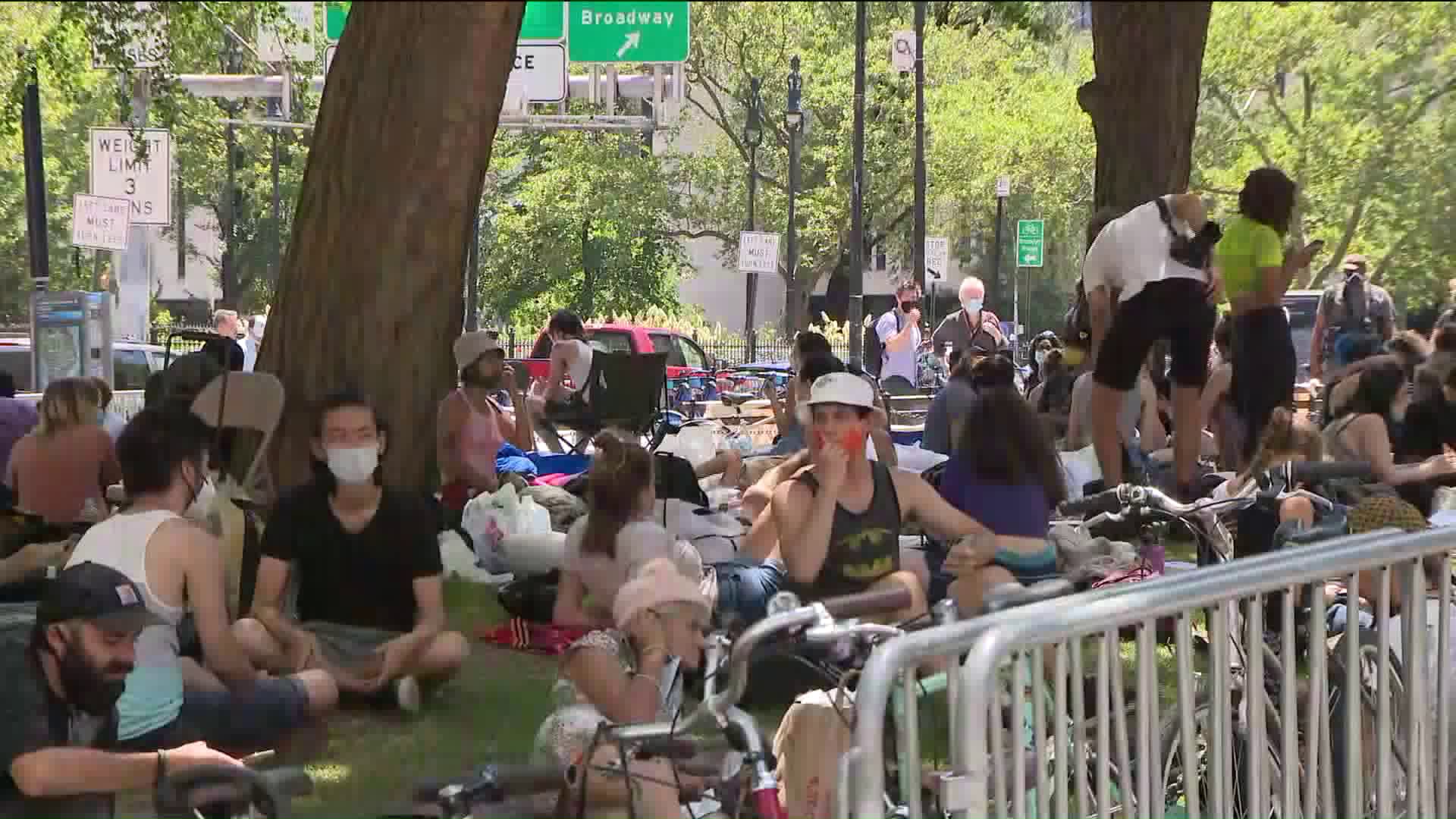 Protests calling for equal justice for black Americans have been underway for four weeks, but a new phase of protest seems to have begun, with two very different calls to action now.

LOWER MANHATTAN — Protests calling for equal justice for black Americans have been underway for four weeks, but a new phase of protest seems to have begun, with two very different calls to action now.

Both are based in New York, but one is calling for change at the local level, while the other seeks large-scale action by the federal government, which would affect people of all ethnicities nationwide.

For the second day for at least a week, protesters camped out on a small patch of lawn near New York City Hall Wednesday. Calling itself "Occupy City Hall," the hundreds of people in the group said that they've modeled their effort after an historic action from the previous decade.

"I was in Occupy Wall Street," said Anoush Tertaulian, an Armenian-American protester, who said that she was on site now, in the same way that she'd been at the two months-long encampment in the Financial District in 2011.

This time, campers say they intend to stay put, around the clock until the city budget is passed next Tuesday. In that budget, they're demanding that the NYPD's $6 billion share be cut by $1 billion.

Charles Khan is one of the organizers of the Occupy City Hall action.

"We want that money spent in communities," he said about their proposed budget cuts. "And we want to move towards a real model of safety, and away from a model of brutality and oppression."

"What Is Owed," the cover story of the New York Times Magazine, has a similar motivation of moving beyond a foundation of brutality and oppression. It was released online on Wednesday, and will be published in the print version of the newspaper on Sunday.

The article makes a detailed argument for reparations: payments of money to the descendants of enslaved people.

Nicole Hannah-Jones is the Pulitzer-winning correspondent and New York Times editorial board member who wrote the story.

"If ever there were a time to have formative racial change," Hannah-Jones told PIX11 News in a FaceTime interview, "this would be now."

Hannah-Jones pointed out in the essay that the federal government has made enormous payments to white people, historically. She elaborated in her interview.

"It decides to start giving 160 acre tracts of land to white Americans," she said, in describing the Homestead Act, which was in effect from the mid 1800s to the early 1900s. Its beneficiaries, she said, included "white people, who were white Europeans that the government wanted to attract to immigrate to the United States."

"The government gave away 10 percent of all of the land in this country to white Americans, for free, in the Homestead Act.," Hannah-Jones said.

"We even pay money to Holocaust surviors," said Hannah-Jones, "and we didn't commit that crime. We do that because it is the moral thing to do."

By contrast, she said, "When it comes to black Americans, this country never felt that it wanted to pay or acknowledge what it has done, and pay restitution."

Hannah-Jones said that when it's taken into consideration that for every dollar of wealth that white American households have, black households only have ten cents, that the right thing to do is to compensate now descendants of people who've built the nation, without compensation, in the past.

Furthermore, she said, emancipated slaves were promised 40 acres each by Union General William Tecumseh Sherman after the Civil War, but never got it.

Now, she said, with protesters of a variety of ages, economic status, and ethnicities taking to the streets to demand equal justice for black people, is the right time to pursue reparations now.

"In the essay," she told PIX11 News, "the argument for reparations is not trying to punish white Americans, and it's not even white Americans paying."

"It's a societal debt that's paid by the federal government," she continued, "and ironically, of course, because black people also pay taxes, we would be paying into our own reparations as well."

Hannah-Jones said that she had only one request of people, regarding her magazine article.

"Just read it with an open mind," she said.

"So many people have kind of a visceral, gut reaction when they hear 'reparations,'" she said. "It just feels unfair to them. But I think it's because we don't actually know this history. We don't understand what's been done."