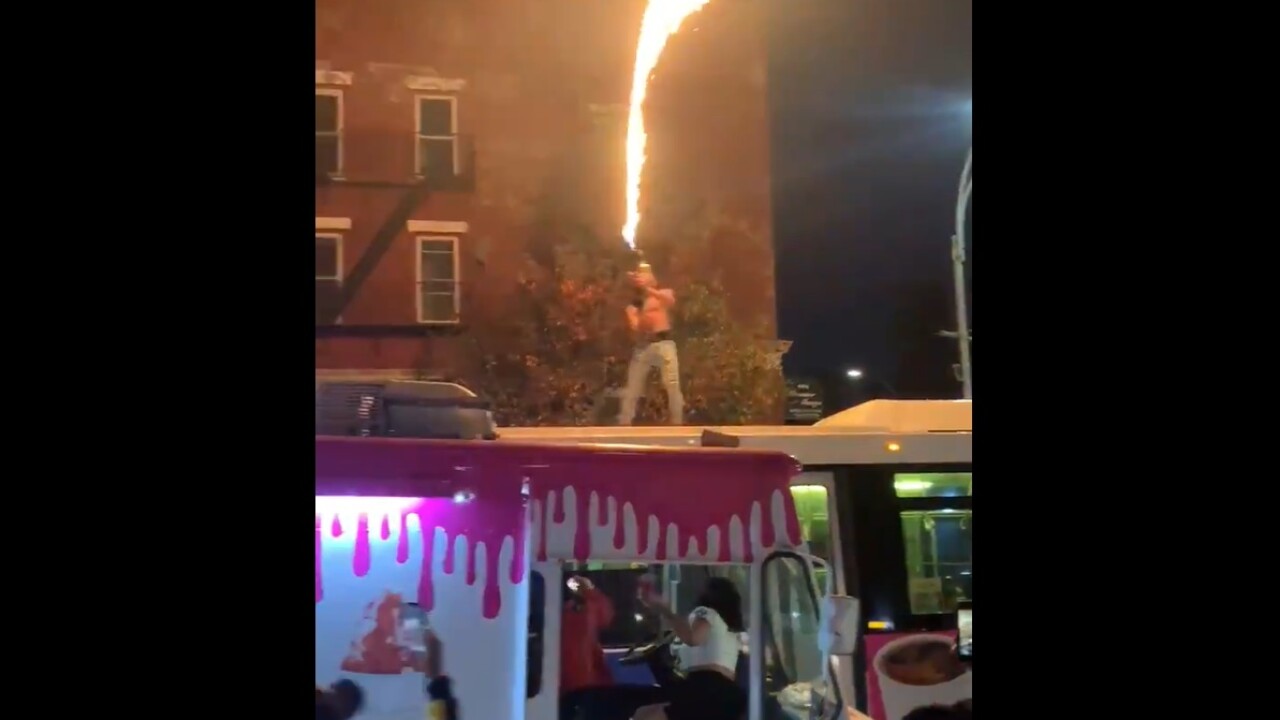 @whatisny / Twitter
Police are investigating a video showing a man shooting a flamethrower on top of an MTA bus in Brooklyn on Nov. 8, 2020.

BEDFORD-STUYVESANT, Brooklyn — Video of a man shooting a flamethrower on top of an MTA bus has sparked an NYPD investigation, police said Tuesday.

The incident happened on Nov. 8 around 5:30 p.m. at Franklin Avenue and Putnam Street in Bedford-Stuyvesant, according to the NYPD.

The wild video shows a shirtless man jumping from the top of an ice cream truck onto an MTA bus that had just pulled up alongside it. The man then shoots the flamethrower, spraying flames into the sky and onto the ground before jumping onto the street, the video shows.

The video appears to have been part of the filming of a music video by a rapper called Dupree G.O.D, according to his Instagram account.

Another video posted to Dupree G.O.D’s Instagram shows the same incident from above, possibly filmed by a drone.

“We shut Franklin Avenue down. With amazing energy. We are in this together. We the illest. Video coming,” part of the caption said.

Police were called to the scene but officers who arrived found no evidence of fire and could not find any witnesses, according to the NYPD.

Police said they were made aware of the video after it was posted on social media Tuesday.

A police spokesperson called the video shoot "impromptu and illegal," adding that the NYPD was not aware of any permits for the shoot. The NYPD is also investigating possible drone use in the video shoot.

The MTA said 25 passengers were on the B26 bus when the man jumped onto the roof. No injuries were reported.

The bus was discharged at the following stop and passengers were transferred to another bus, the MTA said.

“We don’t even need to say how absurd, dangerous and just plain stupid this was. The reckless individual who torched over the top of an occupied bus put New Yorkers, including the bus operator, in life-threatening peril,” the MTA said in a statement Tuesday. “We are grateful the courageous actions of the operator in moving riders to safety minimized risk, and are cooperating fully with the NYPD investigation.”