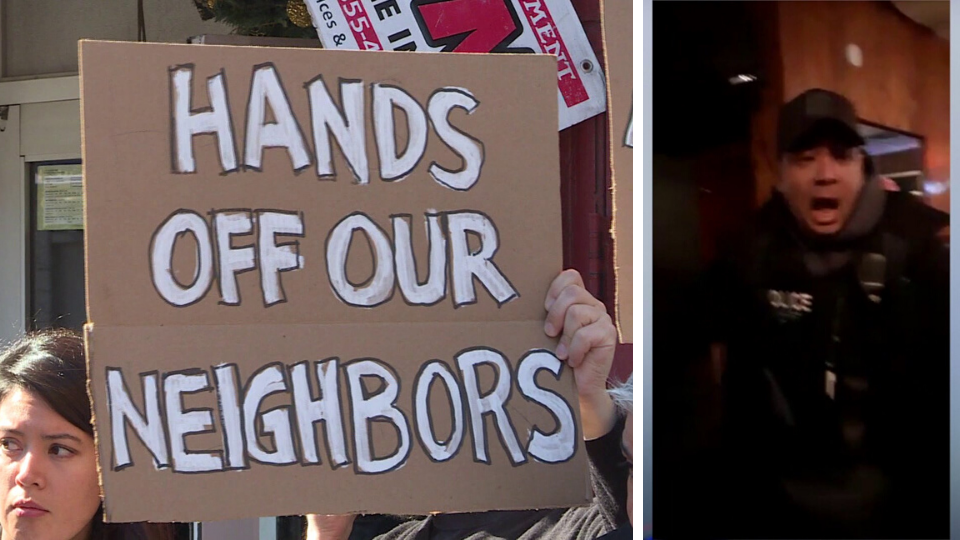 More than a dozen members of the community, along with elected officials, gathered Monday outside the Flatbush restaurant where a worker was recently detained by Immigration and Customs Enforcement officers, calling for her release.

FLATBUSH, Brooklyn — More than a dozen members of the community, along with elected officials, gathered Monday outside the Flatbush restaurant where a worker was recently detained by Immigration and Customs Enforcement officers, calling for her release.

Maria de los Angeles Sanz Pimental was arrested and detained March 1 in what many in the community described as a brutal takedown while she was working her shift at La Cabaña Restaurant along Flatbush Avenue.

Video of the arrest was released over the weekend by State Senator Zellnor Myrie. The footage, taken by a worker at the restaurant, shows a chaotic scene where officers surround and arrest Sanz Pimental after officers subdued her with pepper spray.

Witnesses said the officers never identified themselves or presented a signed judicial warrant.

“It is so disturbing to see ICE agents barge into a local business, take someone who is at work, someone who is contributing to the community and pepper spray them,” State Sen. Myrie said at Monday’s press conference. “This is not how we should be treating our neighbors.”

Sanz’ sister Yeiny Sanz was also on hand and she pleaded with officials to release her sister.

“These police officers walked in and treated her like she was a criminal,” she tearfully said as was surrounded by supporters. “She is not a criminal - she is a mother and a daughter and a great sister.”

According to ICE officials, Sanz had entered the country on a non-immigrant visa authorized to remain in the United States through Sept. 22, 2019. However, she failed to leave the country in accordance with the terms of her visa, officials said.

“During this enforcement action, ICE officers were within the scope of their law enforcement duties and acted with professionalism and respect to ensure the safety of all parties involved. On scene, officers maintained effective communication with Sanz Pimentel and bystanders by ensuring them she would be afforded all courtesy to include a translator during processing. Although the scene became chaotic with bystanders, officers continued to conduct themselves with professionalism to ensure the scene remained safe.”

During the chaotic arrest, pepper spray was used because, according to officers, Sanz resisted arrest - a claim workers at the restaurant are disputing. Sanz remains in custody at Hudson County correctional Center.

Her family has retained a private attorney in vows to continue the fight for her release.