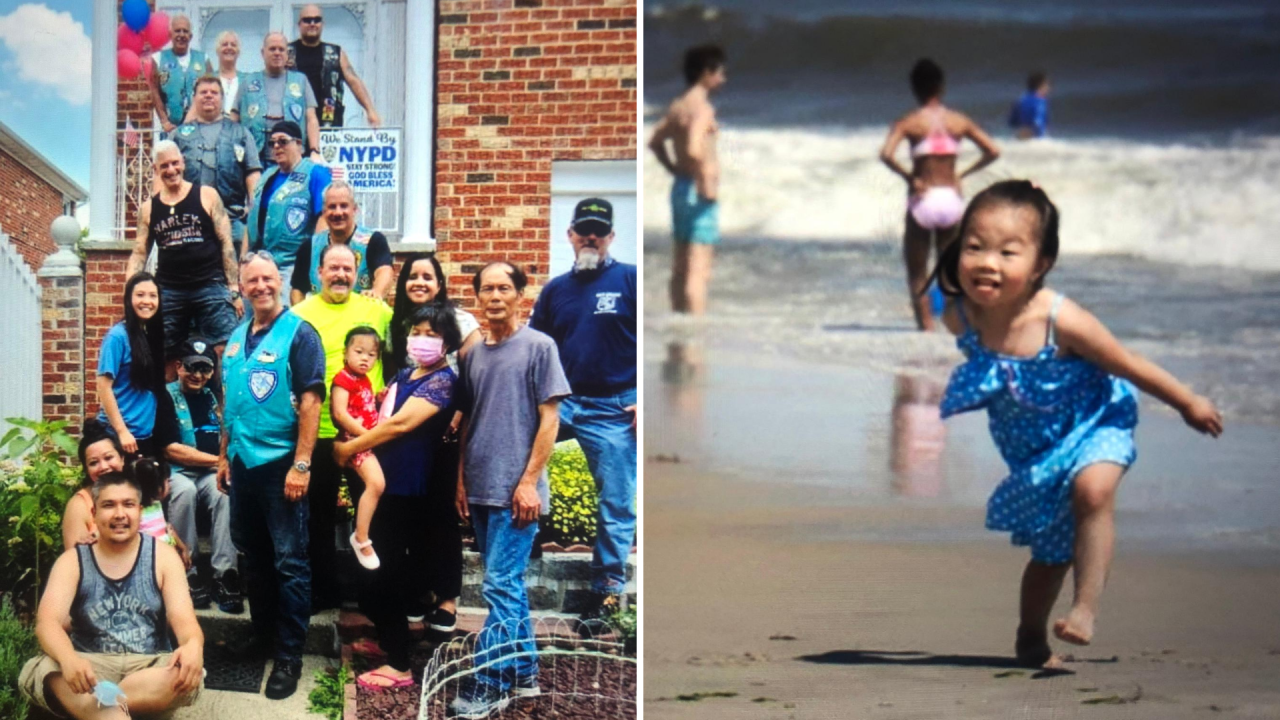 BROOKLYN — Angelina Liu, often called the NYPD's "miracle baby," received a third birthday surprise Sunday during a time when parties are hard to come by.

The little girl — who was born 2 1/2 years after her father, Wenjian, was slain with his police partner — joyfully watched a birthday parade Sunday outside her Brooklyn home, organized by members of the NYPD Blue Knights Motorcycle Club.

A lead car carried a giant, pink balloon with the number three for Angelina.

“She has a big family in blue,” Angelina’s mother, Pei Xia Liu, told PIX11 News Sunday as the family finished up a weekend of celebrations.

The girl’s family took her to Rockaway Beach during a time when gatherings have been kept relatively small because of the ongoing coronavirus pandemic.

Several days ago, Angelina had posed outside police headquarters with a colorful mask on and wearing a backpack. She hopes to begin nursery school in the fall.

“She will always have her aunties and uncles in blue when she’s growing up,” Pei Xia Liu said. “I asked, ‘Where’s your father?’ She pointed to his picture and then the sky.”

Angelina was born in 2017 thanks to in vitro fertilization, two 1/2 years after her father and his partner, Rafael Ramos, were fatally shot in their patrol car, outside a Brooklyn housing project, on Dec. 20, 2014.

It was another time when tensions were flaring between communities of color and cops, culminating in the double NYPD assassination by an enraged gunman from Baltimore.

Nearly six years later, NYPD officers and cops around the nation are adjusting to new policing laws after the Minneapolis death of George Floyd at the hands of police in May.

NYPD police vans were set on fire and brake lines were cut, as bottles and bricks were thrown at officers during the most difficult weeks of unrest in June.

“It breaks my heart that all this has happened,” Liu said.

Little Angelina has been a source of joy for Wenjian Liu’s parents: Wei Tang Liu, the slain detective’s father, and Xiu Yan Li, the detective’s mother.

Wenjian Liu was their only child.

Their eyes smile when they hold Angelina and play with their miracle grandchild.