Journalist says he was assaulted by group of protesters in Borough Park, allegedly incited by community leader 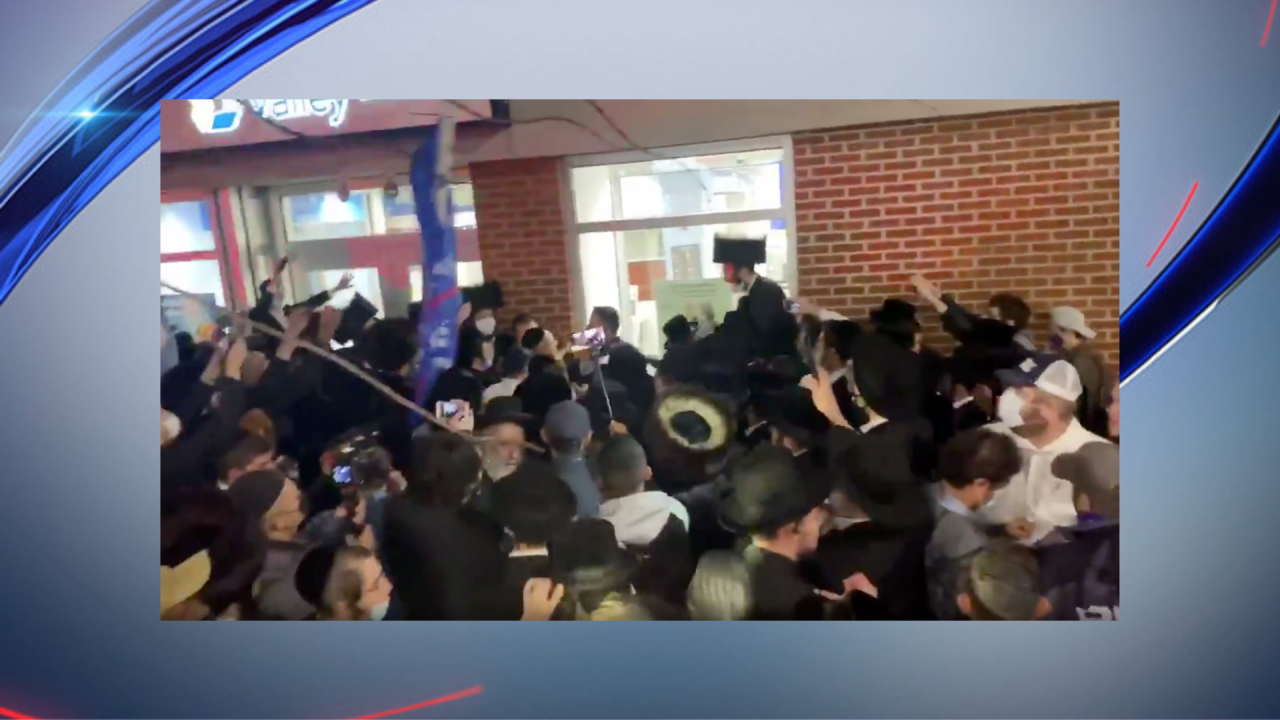 BOROUGH PARK, Brooklyn — A journalist covering protests in Borough Park was brutally attacked by the crowd in which he was covering, he said on Twitter Wednesday night.

Jacob Kornbluh, who identified himself as a reporter for jewishinsider.com, said hundreds of community members attacked him, calling him a "nazi" and "Hitler."

I was just brutally assaulted, hit in the head, and kicked at by an angry crowd of hundreds of community members of the Boro Park protest — while yelling at me “Nazi” and “Hitler” —after Heshy Tischler recognized me and ordered the crowd to chase me down the street

He said the assault included being kicked and hit in the head.

Protests erupted in Brooklyn’s Borough Park neighborhood for a second night Wednesday; demonstrators spoke out against Gov. Andrew Cuomo's new restrictions on schools, businesses and houses of worship in some parts of the city and state amid an uptick in coronavirus cases.

The crowd was made up of hundreds who made it clear they would continue to pray together despite the statewide mandate to restrict houses of worship in virus "hot spots," and said they feel Orthodox Jewish communities are being unfairly targeted.

Gothamist reporter Jake Offenhartz captured the moment on video and described what he saw.

"They pinned him against a wall and shouted 'moyser' ('snitch”') as NYPD lost control of the situation," he tweeted. "Really scary scene. Jacob is a pro."

At Heschy’s urging, the crowd just surrounded and attacked journalist @jacobkornbluh. They pinned him against a wall and shouted “moyser” (“snitch”) as NYPD lost control of the situation. Really scary scene. Jacob is a pro pic.twitter.com/783MqbzTBe

According to Offenhartz, community member Heshy Tischler "egged on" and urged the crowd to attack Kornbluh.

Here’s Heschy egging then on. “He’s lucky time be alive,” one of the protesters told me after.

A few yards away, cops agree to close more streets, joking around with same men who just beat up a reporter pic.twitter.com/UekTnKQqrA

"The constitution overrides everything," Tischler said during overnight protests Tuesday into Wednesday. "You do not have to close your shul," he also said.

Tischler was seen on video less than two weeks ago interrupting, ambushing and heckling city health officials attempting to give a briefing in South Brooklyn. He was unmasked and called the head of the city's public hospitals a "filthy animal" as the news conference devolved into chaos; it was eventually shut down by aides.

"While this may be a small minority withing a small community, it is disgusting and those responsible must be held to account for such violence," Nadler said.

Levine called for accountability "for this vile act."

"Reprehensible attack--instigated by a CANDIDATE FOR CITY COUNCIL--against a courageous journalist who has dared to stand up for public health throughout this pandemic," he tweeted.

Councilman Kalman Yeger responded on Twitter, writing: "Second night in a row, a resident of our community was surrounded and assaulted. THIS IS NOT WHO WE ARE. The NYPD must investigate. Enough is enough!"

Kornbluh said he plans to pursue charges against Tischler.

I want to thank the people who got in harm’s way — and might have gotten injured — to protect me. I am filing charges against Heshy Tischler for incitement and physical assault and will seek charges against any individual who hit me.

As of Wednesday afternoon, law enforcement had not arrested or issued summons for anyone in the recent protests, in stark contrast to recent Black Lives Matter protests.

The NYPD said late Wednesday night they were looking into the incident.

Police said early Thursday that no arrests had been made in the second night of protests.