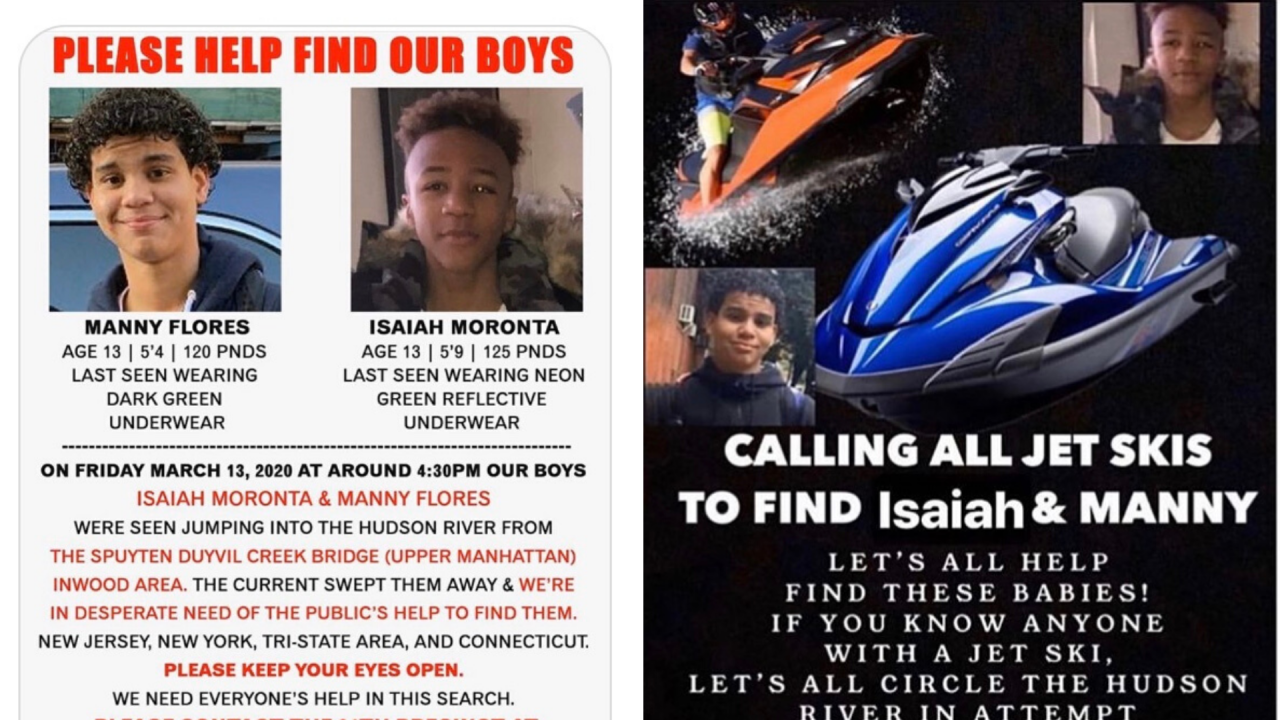 NEW YORK — During any other week, it would have been the lead story.

Two Bronx families are desperately searching for their 13-year-old boys, who made the mistake of jumping into a creek attached to the mighty Hudson River.

They had gone to McDonald’s after school at P.S. 278 and made their way to a place they called “The Beach,” a spot where Spuyten Duyvil Creek meets the Hudson River.

It was a really warm day for mid-March.

Isaiah Moronta stripped down to his green underwear and jumped from the Amtrak bridge over the creek and came out.

“My son is very adventurous,” his mother, Yvelise Beltre, said about her only child.

Father Oscar Moronta said his son is a great swimmer.

“He was always diving in that water," Oscar Moronta said. "I didn't know.”

Isaiah came out of the water, but then his friend Manny wanted to try the jump.

“His friend didn’t know how to swim,” Moronta told PIX11. “So Isaiah went in after him to save him.”

Manny’s mother, Sue Flores, said there were girls there who witnessed it.

“He was yelling for help; that’s why Isaiah decided to jump again,” Flores said.

Isaiah’s mother said she didn’t know anything was wrong until one of the parents called her. She always had a tracking device on her son’s phone letting her know where Isaiah was.

“I looked at the phone and I saw it said Henry Hudson,” she said, referring to the park next to the river. “His phone, his clothes, were all left there.”

“The current took him from the creek to the river.”

The mother said she slept two nights at the park, as Isaiah’s dad organized jet ski crews to search the waters.

She said the current was too dangerous for police divers to enter the water Friday but that NYPD boats were assisting over the weekend.

Friends of the family have been appealing on Instagram for more media attention.

“Everybody is so concerned with the coronavirus that it’s not getting the attention it needs,” Oscar Moronta said. “I spoke to the 34th Precinct.”

“I’ve got to do more,” Moronta said. “A couple of jet ski teams have been in the water the last couple of days.”

“At this point, help me to find their bodies,” Sue Flores said, as her voice broke. “We need help from the community, the police department, everyone.”

Isaiah’s mother is being more hopeful.

“Isaiah knows not to fight the current,” his mom said. “I believe in miracles. I have a big faith in God.”