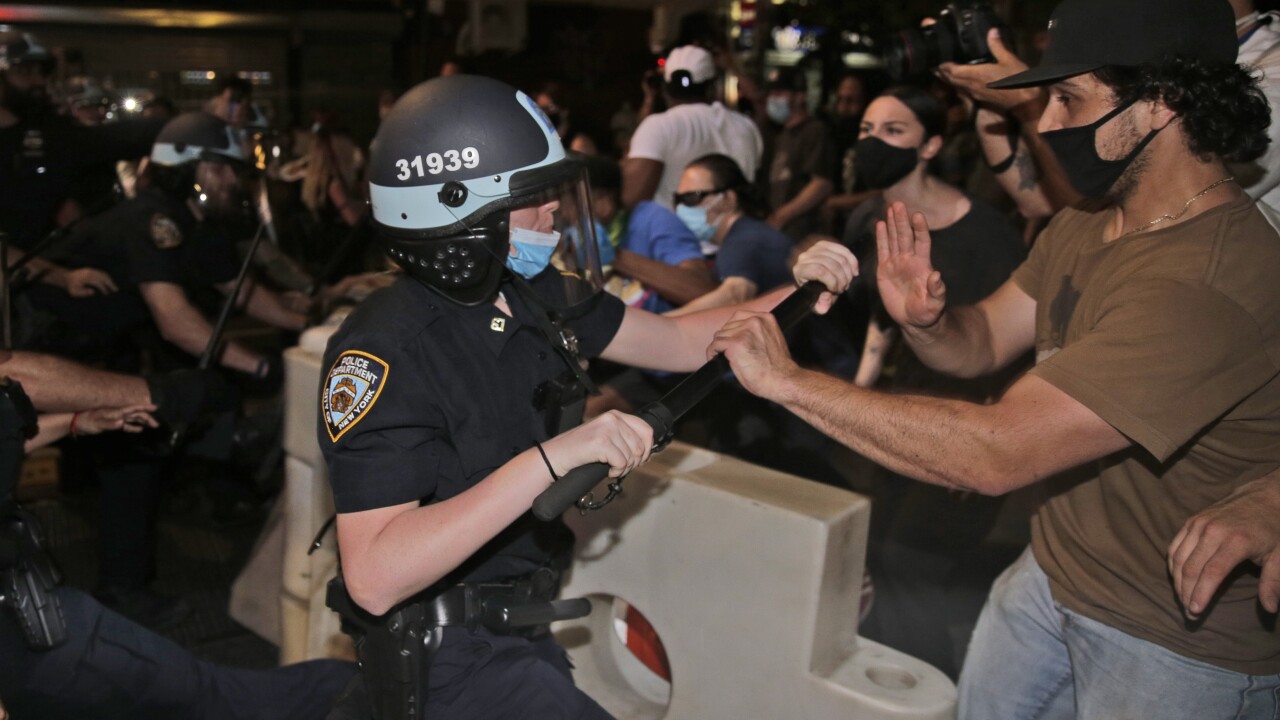 Seth Wenig/AP
Police scuffle with protesters in Brooklyn, New York on Saturday, May 30, 2020.

NEW YORK CITY — At least 345 people were arrested across New York City on Saturday as protests over the death of George Floyd spiraled into chaos and anger, police said Sunday.

Fires burned, windows were smashed and dangerous confrontations between protesters and police officers flared as thousands decried police killings across the country.

Saturday began with mostly peaceful marches in Harlem and neighborhoods in the Bronx, Brooklyn, Staten Island and Queens, but the demonstrations descended into chaos as night fell.

Protesters broke windows, hurled objects at officers and torched police vehicles for the second night in a row. Nearly 50 police cars were damaged and over 30 uniformed officers were injured, according to police.

NYPD Commissioner Dermot Shea said it was clear a small group of protesters "hijacked" a protest in Harlem to incite violence.

Officers sprayed crowds with pepper spray, and bystander video captured a police cruiser ramming into a crowd of demonstrators, knocking several to the ground, after people surrounded the vehicle and threw objects at it.

Mayor Bill de Blasio said the incident involving the police cruiser will be investigated by the NYPD Internal Affairs Bureau as well as an independent panel tasked with reviewing the recent protests.

Shea and de Blasio spoke Sunday about the clashes. Watch the news conference below.

Saturday marked a third day of protests across the five boroughs over the death of Floyd, a black man who died on Memorial Day after a white police officer knelt on his neck for nearly nine minutes during an arrest in Minneapolis, Minnesota.

Floyd’s final minutes of life were recorded on cell phone video and shared widely on social media. In the video, he can be heard saying “I can’t breathe.”

The officer, Derek Chauvin, has been fired and charged with murder.

Floyd’s killing bears a striking resemblance to the police custody death of Eric Garner on Staten Island in 2014. Garner’s last words, captured on cell phone video, were “I can’t breathe."

Violent demonstrations erupted this week in major cities across the country as protesters decry years of deaths at the hands of police officers.