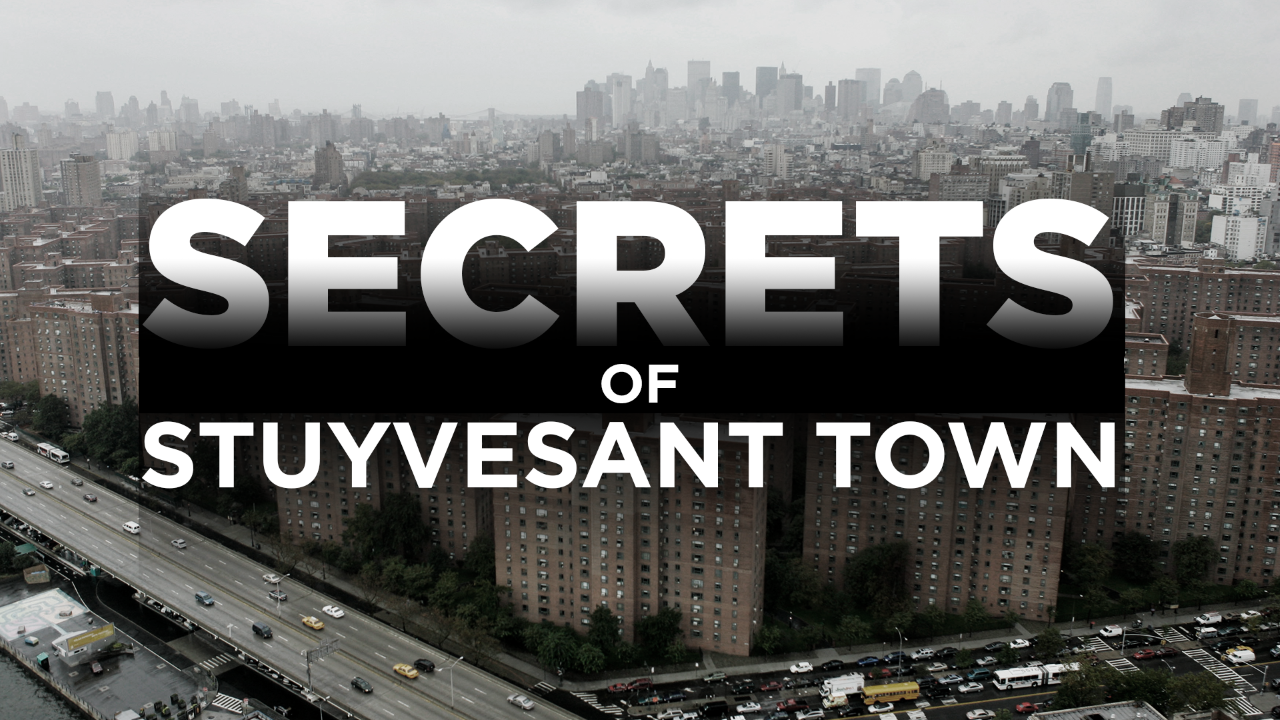 Their efforts laid a foundation for civil rights reforms nationwide, whose effects are still felt in some ways now. Liz Fox, who's now a grandmother in her 70s, played a vital role in the movement, even though she was a 6-year-old girl when it came to prominence.

"It was one of the early expressions of concern on the part of a large group of white folks," Fox said in an interview, "who felt it was wrong not to allow Black folks to live in the same community."

That community was Stuyvesant Town, an 89-building complex housing more than 21,000 people. All of them were white when the 80-acre complex opened in 1947. The "No Negroes" policy, established by the property developer and owner, Metropolitan Life Insurance Company, or MetLife, was also approved by the city government.

Roger Parris, 76, was also in elementary school when Stuyvesant Town, which is widely known as Stuy Town, opened.

"It was indicative of that time period, the late '40s, how white people felt about Black people," Parris said. "They didn't want us down in Stuyvesant Town."

His family lived instead in Riverton, an apartment complex that physically resembled Stuy Town but was far smaller. Riverton was just seven buildings and was 117 blocks north, in Harlem, which was an almost completely Black neighborhood. MetLife had also developed Riverton, and referred to the nearly all-Black apartment complex in its statements to justify its policy of keeping Black people out of Stuy Town.

Both developments had been designed and built to house the families of U.S. soldiers returning from World War II. In the case of Stuy Town, though, it was marketed through a pamphlet titled "Stuyvesant Town: This Is Your Home," with the font of the word "your" italicized. That emphasized the complex's exclusivity for whites, according to Adam Thorburn, who wrote a play in 2014 that used the same title, for ironic emphasis.

The discrimination "was hideous back in the day," Thorburn said in an interview. "Citizens understood this, and raised their voices to change it."

They formed the Tenants' Committee to End Discrimination in Stuyvesant Town. The committee produced brochures of its own, including one with a photo of dozens of its members gathered in one of Stuy Town's many open spaces. At the center of the photo is a father and his daughter, leaning on him, barely taller than his hip. That was Liz Fox.

"I knew why I was there, and I knew what was happening," she said in a Zoom interview from her home in Boulder, Colorado, where she lives now.

Her parents, Leo and Diana Miller, were leaders of the Stuy Town anti-discrimination movement. The Millers talked openly about their activism with a variety of people over the years, including their grandchildren. Amy Fox was one of them.

"They would say things like, 'I didn't go overseas to fight fascism, to come back and have it in my backyard,'" Amy Fox said about her grandfather, specifically.

With lessons learned from the war against fascism fresh in their minds, the new residents of Stuy Town launched their initiative to racially integrate their community.

One family, led by Grace and Lee Lorch, intentionally allowed a Black family to stay in their apartment, rent-free — subletting was not allowed — as a direct challenge to MetLife's discrimination policy.

Lee Lorch, a math professor, had lost his position at City College due to his Stuy Town activism. When he obtained a teaching position at Penn State University, his family let Hardine and Raphael Hendrix, and their son, Hardine, Jr., occupy their apartment.

"They were there as our guests," Lee Lorch said in a 2010 interview for the film "Burden of Eden."

His daughter, Alice Lorch Bartels, said that her family paid a heavy price for their activism.

"They said, 'You either give up the apartment, or you're fired,'" she said, regarding the academic institutions that had employed her father.

"This became a front page story in the New York Times," he'd said in his 2010 interview.

The situation involving the Lorch and Hendrix families drew so much attention that another mathematician, Albert Einstein, wrote a letter of support.

That wasn't enough, however, to save Lorch's job at Penn State, or at two historically Black colleges in the South where Lorch was able to get teaching positions after that. He ultimately had to leave the country to get work, in Canada, and ended up having to remain in exile there for six decades. He died in Toronto.

"What do you do?" asked his daughter, Alice Lorch Bartels. "Do you sell your honor, or do you, you know, lose your job? And so that was... what he did."

"Come out and say, 'You know what, we're going to build a separate housing development, and that can be for African American residents.' And that was the Riverton," Ecker said.

The Riverton, is 115 blocks north of Stuy Town, in Harlem. The black writer and public intellectual James Baldwin wrote an article in Esquire Magazine that said, in part, in describing the Riverton, "The people in Harlem know they are living there because white people do not think they are good enough to live anywhere else."

In fact, MetLife not only built Stuy Town, it also built Peter Cooper Village, just to the north of Stuy Town, and Parkchester, in the Bronx. Those three developments, combined, have a total of 222 buildings, housing 125,000 residents. All of them were white, by corporate policy, in the years after the war.

Riverton was far smaller than the three all-white developments. Its seven buildings housed only about 4,400 people -- almost all Black, except for some white war brides from Europe.

Roger Parris, 76, was just entering elementary school when his family moved into a Riverton apartment in 1948.

"Instead of building a sprawling complex, like they had for Stuyvesant Town and Parkchester," Parris said in a recent interview at Riverton, "they built this."

"They had the steak," he continued, "and they gave us the crumbs from the plate, you know. But you know what? We made those crumbs into steak. You know, we made our own steak."

Riverton ended up attracting some of the biggest names of Black culture -- including jazz legend Billy Taylor, and the families of Suzanne DePasse, who went on to become president of Motown, and Clifford Alexander, first Black secretary of the U.S. Army. Former New York City Mayor David Dinkins was also a resident of Riverton.

Despite the quality of achievement that some Riverton residents eventually obtained, it was still intentionally separate, and unequal from Stuy Town. So the downtown development's white tenants kept fighting. In an interview, original Stuy Town resident Liz Fox displayed what looked like a work of art.

"This is a framed copy of the eviction notice," she said. "So, anybody walking into the apartment saw that, the minute that they walked in."

Her parents, the Millers, were among more than a dozen activist families that MetLife tried to evict. The fact that the family still has their eviction notice is testament to the fact that it was never invoked.

The Millers, and most of the other families on notice, kept their apartment, through a compromise.

MetLife ended up allowing the Hendrixes and two other black families to move into Stuy Town after nine years of protests. But the white family whose home the Hendrixes had moved into -- the Lorches -- was among three white families that had to promise to never come back. Alice Lorch Bartels said that it was yet another big sacrifice for her family that was nonetheless worth it.

"I agree with my parents," she said. "I think they did the right thing."

The effort of which they were a part laid the groundwork for the Fair Housing Act of 1968, which made housing discrimination a federal crime.

MetLife ended up selling StuyTown in 2006, which changed many of the apartments from having rent regulated status, to market rate.

"I have several friends who live there and moved in, [and] are paying... the high rents," said Amy Fox, "and have no idea about this history at all."

For their part, Stuy Town developer MetLife said, in part, in a statement, “Any discrimination that existed when Peter Cooper Village and Stuyvesant Town were built in the 1940s is categorically wrong. ...We deeply regret this period in the company’s history. We are continually striving to be a company that champions diversity, inclusion, equity and respect in every aspect of our business.”

A spokesperson for the current management of the property, Beam Living, said, "We are and will always be a community that proudly supports equality for all, and we have a zero tolerance policy for racism or discrimination of any kind."

Riverton's owners, A & E Real Estate, said, through a spokeswoman, that it's proud of the African-American heritage of the development.

It remains largely African-American. Also, nearly 80 percent of Riverton's apartments are regulated as affordable, where working, middle class applicants can live in the complex, if their income is in a regulated, moderate range.

Stuy Town has a similar affordable housing program, but it applies to only about 44 percent of its apartments.

Still, both housing developments have moved beyond their segregationist roots, because of activism taken by their first residents.

"This is what almost everybody there thought should happen," said Alice Lorch Bartels, "that this place should not be a segregated housing place. It should be open to everybody."