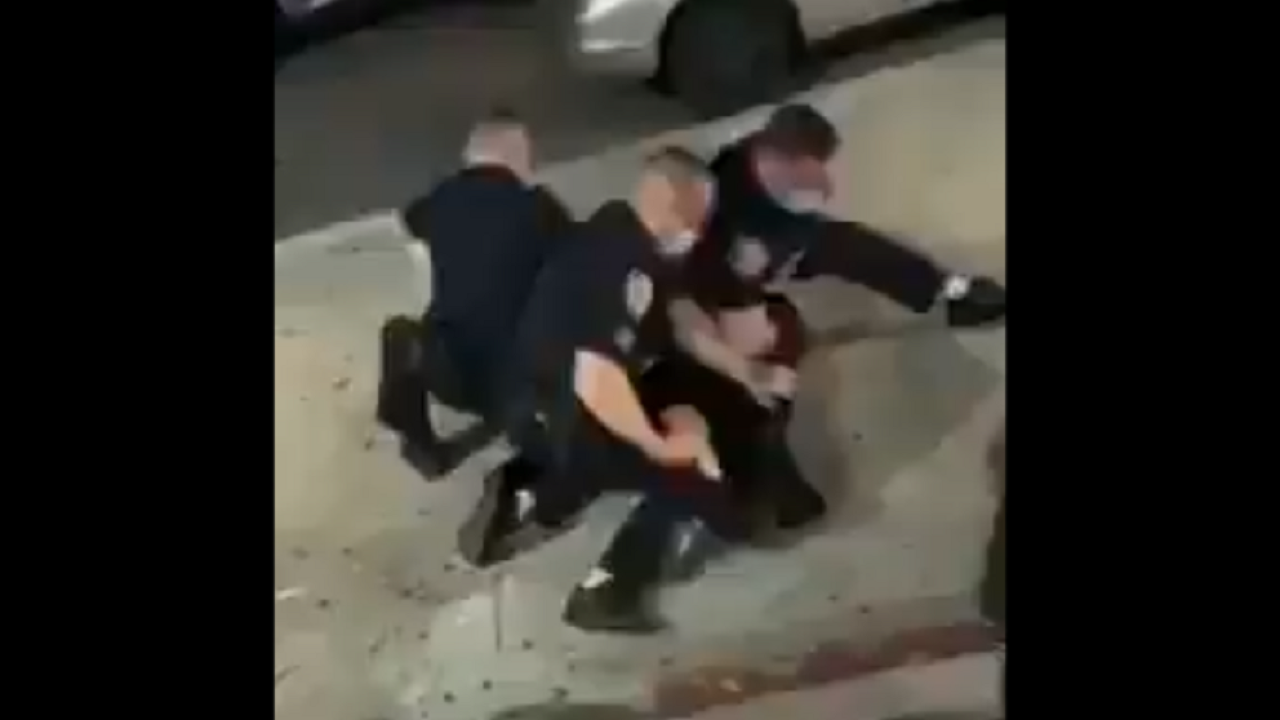 Rep. Hakeem Jeffries / Twitter
Police are under fire for a social distancing arrest on Sunday, May 3, 2020, that was captured on video and posted to Twitter.

EAST NEW YORK, Brooklyn — The NYPD is under fire over a social distancing arrest for the third time in three days.

The incident happened on Sunday night just after 10 p.m., according to an NYPD spokesperson, who said the video did not capture the encounter in its entirety.

The video begins as officers are wrestling a man on the ground. One of the officers then punches the man in the head while the other officers restrain him, the video shows.

Bystanders can be heard yelling at the officers as the situation escalates. When one person threatens to file a complaint against the officers, the cop who punched the man replies: “Great, thank you,” according to the video.

As the bystanders continue to record the arrest, two officers begin to approach and demand they go home while the third officer continues to restrain the man on the ground, the video shows.

“What are you looking at? You want to go with your friend?,” the officer says to one bystander toward the end of the video.

Before the video began, the man who was taken into custody, identified by police as Stephon Scott, was part of a group of people hanging out on a stoop in violation of social distancing executive orders, according to the NYPD spokesperson.

After they were told to disperse, Scott walked away and tried to enter a police vehicle, the spokesperson said. When a sergeant attempted to stop Scott, he punched the sergeant in the arm, according to the NYPD. The sergeant then took Scott to the ground and the two additional officers came to his aid, per the NYPD.

While the arrest is being reviewed, NYPD Commissioner Dermot Shea said earlier Tuesday the officers’ actions might not constitute excessive force.

“A punch is something that we train for in the police academy. It is apart of the level of escalation that begins with discussion, begins with de-escalation and it progresses up from there,” Shea said. “A punch should not be assumed to be excessive force. It should be examined in the totality of the circumstances.”

Additionally, police said Scott was arrested for an alleged burglary about one month ago but the Brooklyn district attorney declined to prosecute citing "public health.”

“I don’t think it’s surprising here, you have individuals who are being repeatedly arrested, and it’s not shocking to me that they’re not complying with police’s orders at times,” Shea added.

Jeffries, however, pointed out the stark contrast in how social distancing is enforced in neighborhoods, asking on Twitter why sunbathers who violated social distancing rules over the weekend were treated differently than young men in “certain communities."

The lawmaker was referencing photos showing crowds of people who gathered at Christopher Street Pier and other parks in Manhattan over the weekend, breaking social distancing rules to enjoy the warm weather.

The video Jeffries posted on Tuesday follows two other videos of the NYPD’s social distancing enforcement in recent days.

On Saturday, the arrests of three people in the East Village sparked outrage after an officer was caught on video charging at bystanders with his stun gun drawn and throwing a man to the ground. That officer has been placed on modified duty while the incident is investigated by the department's Internal Affairs Bureau, according to the NYPD.

Another video that surfaced shows NYPD officers using force to arrest three men Saturday night after a group of people refused to disperse near the corner of Fountain and Blake avenues in East New York, according to police.