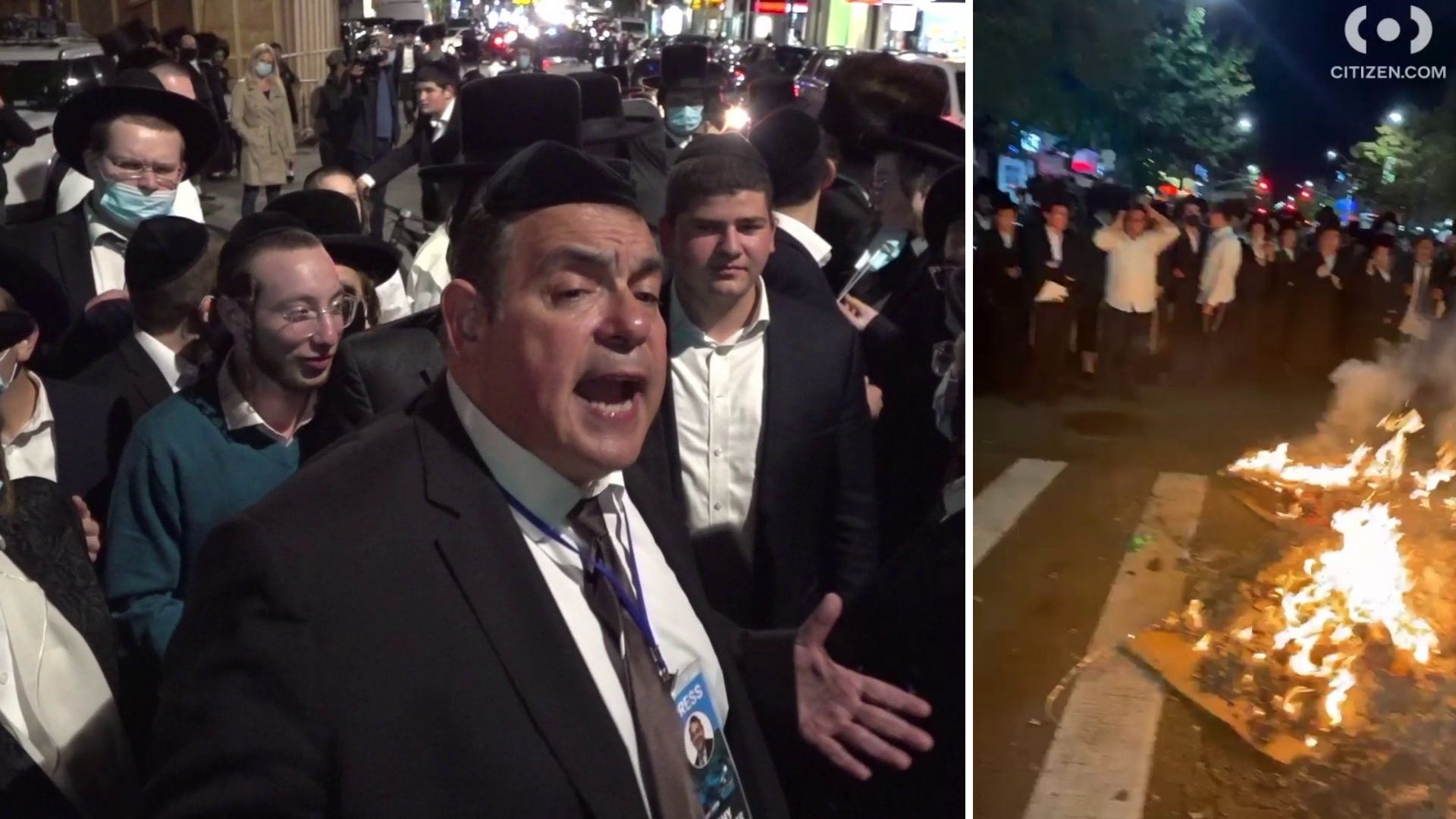 BOROUGH PARK, Brooklyn — Dozens filled the streets of a Brooklyn neighborhood overnight in protest of Gov. Andrew Cuomo's new restrictions in several areas of New York City where there has been an uptick in coronavirus cases.

A large crowd of people from the Orthodox Jewish community came together in the Borough Park area late Tuesday night into early Wednesday, making it clear they'll continue to pray despite the statewide mandate to restrict houses of worship in virus "hot spots."

"The constitution overrides everything," activist Heshy Tischler said as he spoke out on behalf of the crowd and his community. "You do not have to close your shul," he also said.

At one point, demonstrators set a fire in the middle of a street.

While the protest was largely peaceful, police said one person was hurt and hospitalized after a fight broke out among those gathered. It was not immediately clear what led to the dispute.

The NYPD said no arrests were made at the protest.

The group said they are planning another demonstration for Wednesday night around 9 p.m.

To slow the spread of the virus in the COVID-19 "hot spots," the governor unveiled a Cluster Action Initiative on Tuesday.

Cuomo's plan uses a color-coded system to identify the level of restrictions in each effected geographic area.

The red zones, where the highest number of cases exists in a cluster, will face the most drastic action. Additional action will be taken in communities surrounding the cluster, labeled the orange zones, to stop the spread of the virus. And, as a precaution, some restrictions will also be implemented in communities that outline that area, identified as yellow zones.

When it comes to religious gatherings, there will only be up to 25% capacity allowed in houses of worship, or 10 people maximum, in red zones.

In orange zones, there will only be up to 33% of capacity allowed in houses of worship or 25 people maximum.

Houses of worship in yellow zones can have up to 50% capacity.

In a joint statement from four City Council members who represent religious neighborhoods where there are "hot spots," the leaders described the governor's plan as a bait-and-switch.

The community leaders said they were told on a conference call that synagogues in red zones could operate at 50%, then later learned of the more-severe restrictions when Cuomo announced the plan.

Bishop Nicholas DiMarzio, from the Roman Catholic Diocese of Brooklyn, also issued a statement saying the governor's restrictions are unfair.

"To think that some of our churches have the capacity to hold a thousand people for Mass, a capacity range of 10 to 25 people is disrespectful to Catholics and to the clergy who have followed the rules," DiMarzio said.