President Trump opts not to take questions at Friday's briefing 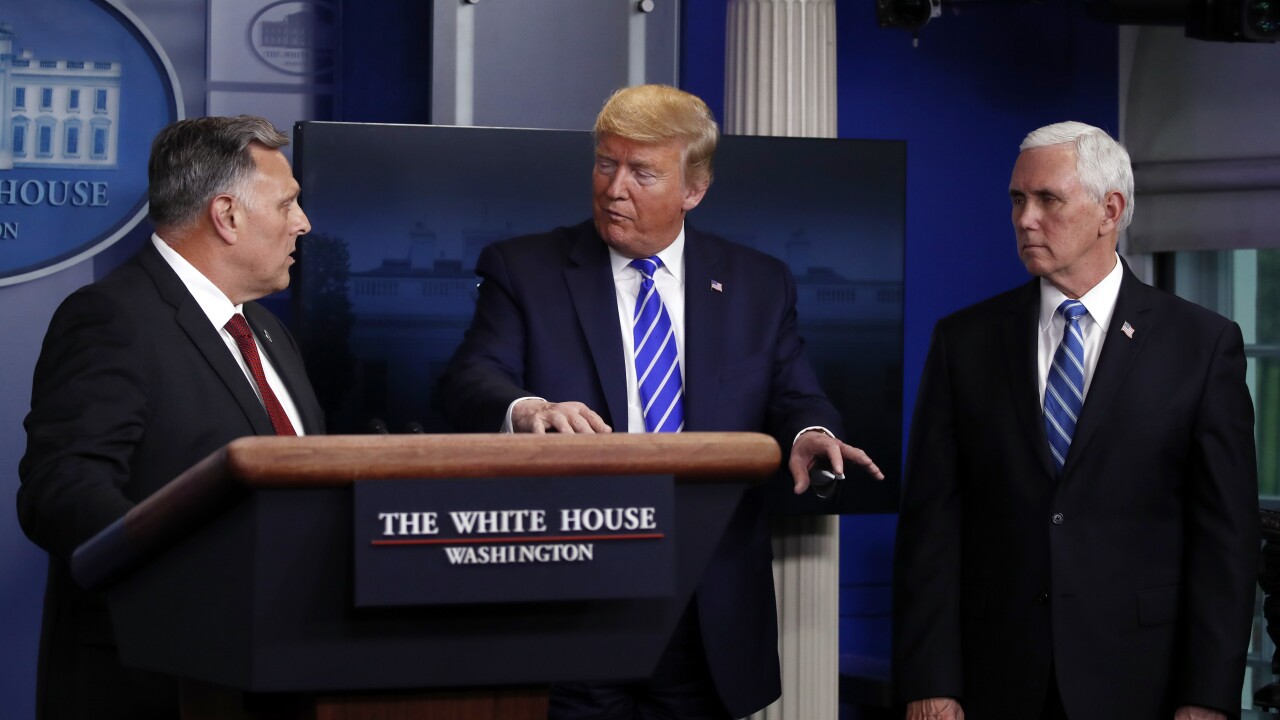 Copyright 2020 The Associated Press. All rights reserved.
Alex Brandon/AP
President Donald Trump talks with Bill Bryan, head of science and technology at the Department of Homeland Security, as he speaks about the coronavirus in the James Brady Press Briefing Room of the White House, Thursday, April 23, 2020, in Washington, as Vice President Mike Pence listens. (AP Photo/Alex Brandon)

President Donald Trump decided not to take any questions, calling an end to Friday's coronavirus news briefing after 22 minutes.

Earlier on Friday, Trump addressed comments he made during Thursday’s briefing, when he inquired scientists on whether injecting disinfectants and UV light could be used to kill the virus. Trump told reporters he was being “sarcastic.”

At Thursday’s briefing, William Bryan who is Homeland Security’s Under Secretary for Science and Technology presented research that indicates that UV light, bleach and alcohol are effective at killing the virus on non-porous surfaces, like metal.

Then Trump followed with several questions about whether UV light and disinfectants would be effective on both skin and as injections.

“Then I see the disinfectant, where I see it knocks it out in a minute,” Trump said on Thursday. “Is there a way we can do something like that? By injection inside or almost a cleaning, as you see it gets into the lungs and it does a tremendous number.”

The comments set social media ablaze late Thursday and into Friday, both supporters defending and opponents mocking the president for his comments.

Trump’s “sarcastic” question prompted the CDC and Surgeon General to issue statements to clarify that disinfectants are dangerous, and not to be used internally to fight the virus.

Also earlier on Friday, Trump addressed a report that Rick Bright plans on filing a whistleblower report after Bright claimed the White House reassigned him for speaking out about the effectiveness of hydroxychloroquine. For weeks, Trump openly discussed hydroxychloroquine, once saying “what do you have to lose?” by taking the drug to treat coronavirus.

The drug comes with known side effects, and on Friday, the FDA issued a warning that hydroxychloroquine might cause complications of the heart.

Bright was reassigned from his post as the director of the Biomedical Advanced Research and Development Authority.

Trump was then asked if he would look into Bright’s removal, responding, “I have not yet. At some point I will. I guess they moved him into a different group.”