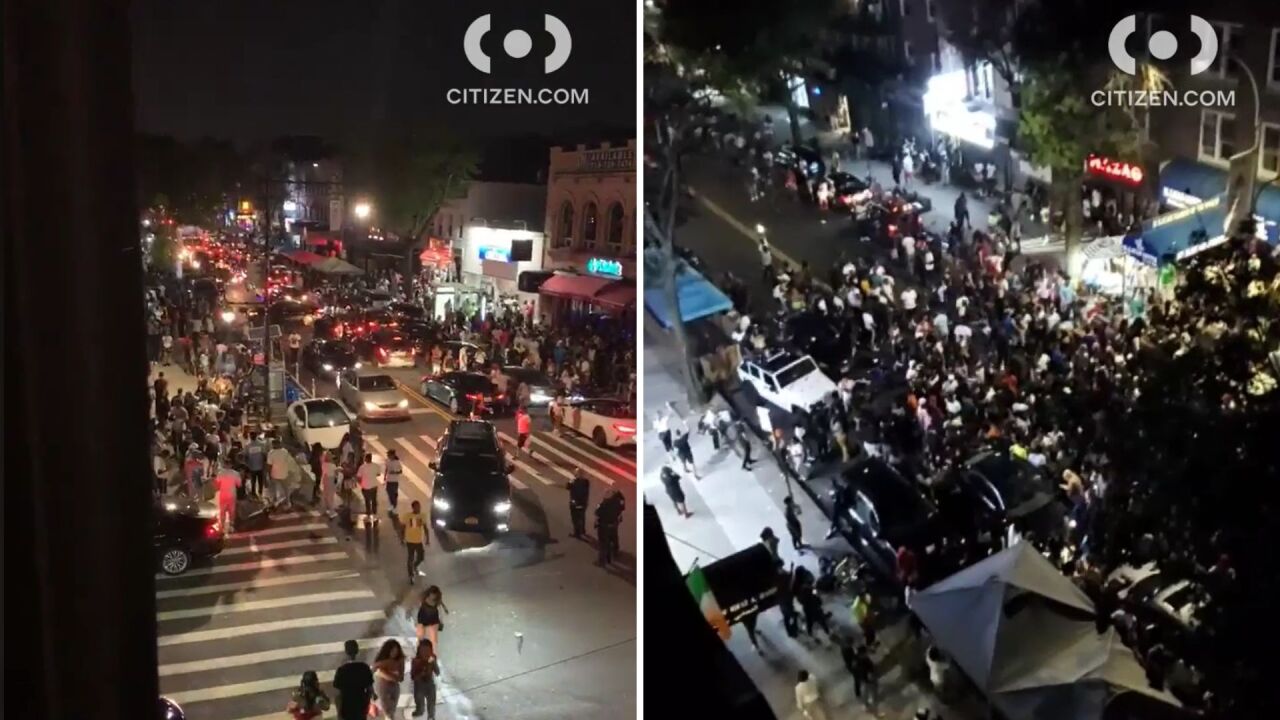 Citizen App
Crowds gathered in Astoria, Queens, without social distancing or masks on the morning of July 18, 2020.

Gov. Andrew Cuomo said on Monday he will roll back the reopening plan and close bars and restaurants if the crowding issue does not stop.

“It is a problem. We know enough about this virus to know that there are inevitable consequences to our actions. If you have congregations of people, they are going to spread the virus,” Cuomo said during a coronavirus briefing. “It’s stupid. Don’t be stupid.”

The governor called on local governments and police departments to enforce social distancing laws and disperse crowds when they arrive on the scene.

Cuomo specifically called out the NYPD’s response to hundreds of people who gathered in Astoria Friday night.

“You had police in Astoria. It’s not just showing up,” Cuomo said. “The crowd has to be dispersed. It’s violating the law; period.”

When asked why the State Liquor Authority can’t handle enforcement, the governor said that with only 30 investigators for the entire state, the agency was never meant to be used in that manner.

Local governments and police departments should be enforcing social distancing laws and then flagging bar and restaurant violations to the SLA, which can then move to revoke a liquor license, according to Cuomo.

“We cannot do this level of enforcement without the local government and local police departments. We need them,” the governor added.

Requests for comment from the NYPD and mayor's office were not immediately returned, however Mayor Bill de Blasio addressed the Astoria crowding Monday morning during a separate coronavirus briefing.

Brik Astoria, the restaurant considered to be the "focal point" of the crowds, was shut down for outdoor dining, the mayor said. He also said the city would issue summonses to bars and restaurants that violate COVID-19 restrictions.

"When we agreed to let this part of our life come back, it's not meant to be business as usual," de Blasio said.

The mayor also said their goal is not to shut down businesses, but aggressive action will be taken to ensure the safety of New Yorkers.

Over the last few months, large gatherings have been reported in several Brooklyn neighborhoods, the East Village, Hell's Kitchen, the Upper East Side and on Fire Island.

Cuomo also called on young adults who think they’re “superheroes” and immune to the effects of COVID-19 to think again.

“You can get sick in your 20s. You can die in your 20s; people have,” he said. “You can take the virus and spread it to someone else.”