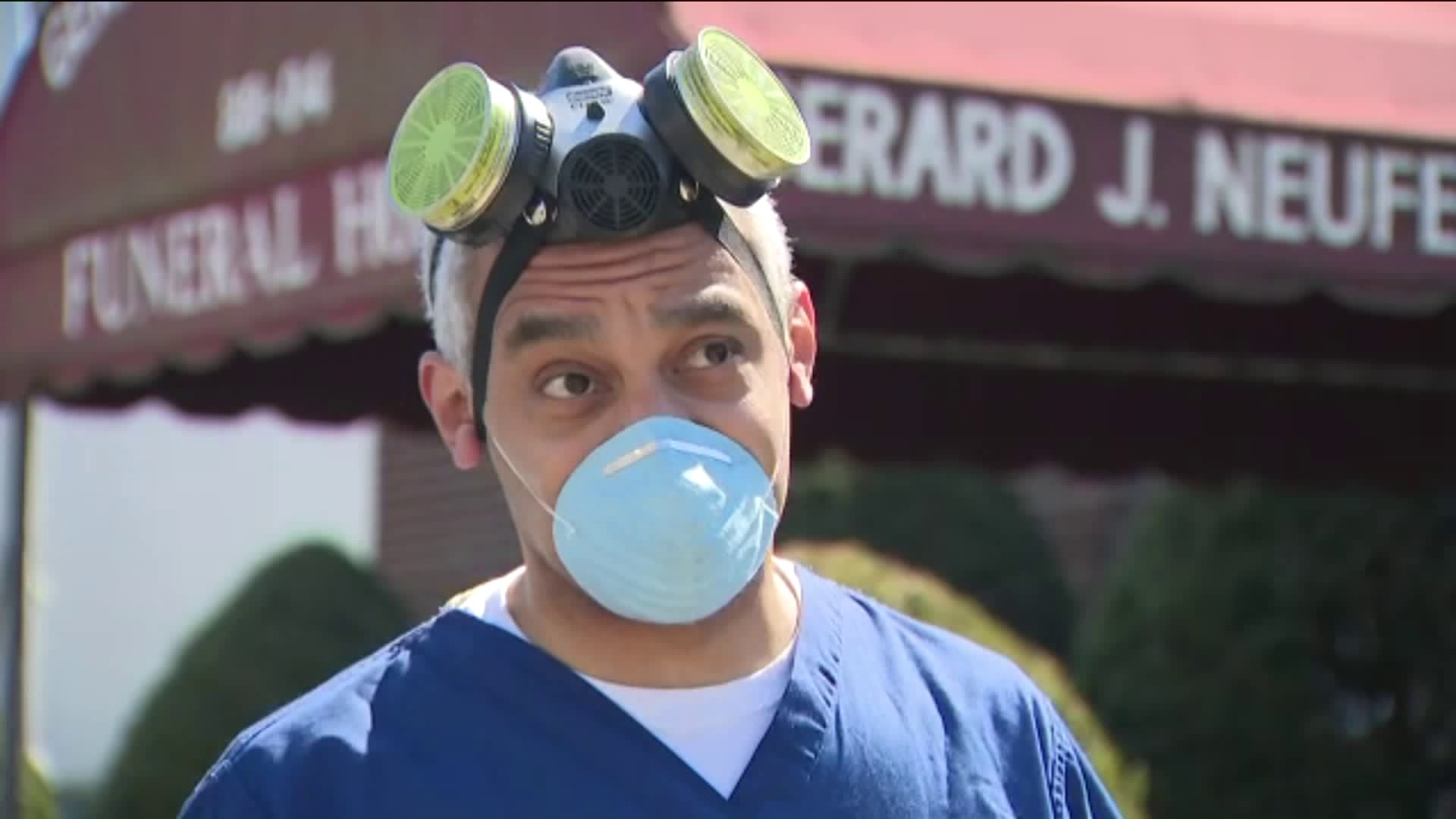 Funeral directors are being squeezed on one side by inundated hospitals trying to offload bodies, and on the other by the fact that cemeteries and crematoriums are booked for a week at least.

ELMHURST, Queens — The number of dead waiting for burial in the COVID-19 crisis got so large that one Queens funeral home had to make a tough decision.

“We’re no longer embalming them; we don’t have time for visitation,” said Omar Rodriguez, a funeral director and embalmer hired to assist with the overwhelming request for burial services at Neufeld Funeral Home in Elmhurst. “We’re simply burying them directly, picking them up at the hospital and going directly to the cemetery or doing direct cremation."

Rodriguez was born in Elmhurst—a hot zone in the deadly coronavirus pandemic—and his parents still live on Ithaca Street. He was hired by the Neufeld Funeral Home because he’s proficient in Spanish and many clients are spanish-speaking.

Many families want the victims flown home to their native lands.

“We are recommending they cremate the body, and then they can take the remains back home to their country whenever they’re ready to fly to their country,” Rodriguez said.

The Neufeld home said it would store the cremated remains free of charge.

But the bigger issue is the backlog of bodies awaiting burial or cremation. Rodriguez said Neufeld handled dozens of burials in the last two weeks.

Neufeld still has 85 to 90 bodies awaiting burial or cremation through its home, handling about 10 a day.

Anyone who calls this week will be politely asked to call back on Monday, when these remains are handled.

Most bodies still remain in freezer trucks behind various hospitals in the city.

“This morning, I was at Montefiore in the Bronx,” Rodriguez said. "They have three or four tractor trailers filled with remains.”

Rodriguez said the homeless and others without families may end up at the Medical Examiner’s office for later burial on Hart Island.

At one point Monday, City Councilman Mark D. Levine, chair of the council’s Health Committee, sent a tweet that said “ we’ll start ‘temporary interment.’ This likely will be done by using a NYC park for burials (yes you read that right). Trenches will be dug for 10 caskets in a line. It will be done in a dignified, orderly—and temporary—manner. But it will be tough for New Yorkers to take.”

One of the crematoriums in Queens is so overwhelmed with requests that Neufeld Funeral Home is now moving many remains for cremation out to another facility in Center Moriches, Long Island.

Many families are now holding Facebook Live memorial services or gatherings on Zoom.

Melody Aravena, who said farewell to her husband Sonny this past Friday, said she was hesitant to use Facebook as a way to honor her spouse, a father of 5.

“I don’t want to see this continuously over and over and over (on social media)” she said tearfully. “But at the same time, I wanted everyone to give love to him.”