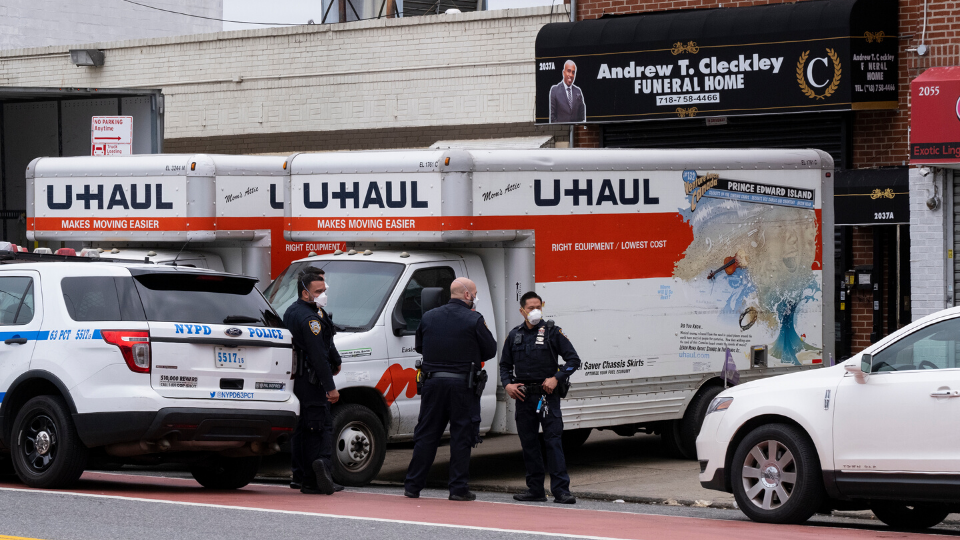 Authorities responding to complaints about a bad smell found that the home had rented four trucks to hold about 50 corpses. Mayor Bill de Blasio called the actions “unconscionable.”

FLATLANDS, Brooklyn — Tamisha Covington showed up on Utica Avenue Thursday afternoon, outside Andrew Cleckley Funeral Home, hoping to get information about the status of her mother’s remains.

“Her body’s been here since April 9,” Covington told reporters, her voice choking with emotion. “And they charged me $15,000 to bury my mother. A closed casket, no funeral.”

Covington said her mother, Deborah Harris, 60, died of a heart attack, but many of the bodies that were stashed in U-Haul trucks outside the home were believed to contain victims of the COVID-19 virus.

The New York State Health Department, NYPD Detectives and the Department of Environmental Protection showed up there Wednesday after neighbors reported a foul smell coming from the trucks.

A law enforcement source told PIX11 that investigators believed dozens of bodies were stored in the trucks, although some were moved Wednesday before officials turned up on the scene.

By the time detectives got to Utica Avenue, 21 bodies were left in the non-refrigerated trucks, the source said.

The DEP wrote up two summonses for Cleckley Funeral Home.

When PIX11 tried to reach the owner Thursday, the voicemail said there wasn’t room for more messages.

Joe Neufeld, Sr.— owner of a well-known funeral home in Elmhurst, Queens — told PIX11 Thursday he understands the pressures morticians are under.

“He probably got very inundated, he probably doesn’t have enough staff, and he kept bringing bodies in,” Neufeld theorized. “There’s only one crematory in Brooklyn and one in the Bronx, and they cannot physically handle the volume of deaths going on."

Speaking for himself, he said, “We can’t get cremation dates for two weeks, three weeks, burial dates for ten days.”

PIX11 asked Dr. Kenneth Balbi, an environmental expert, about possible contamination to the community from having corpses in the non-refrigerated trucks.

“There are definitely health concerns,” he said, “as to decomposition. You got the potential for vermin.”

Balbi said if the bodies were badly decomposed, there’s a danger posed from hepatitis or cholera.

He also cited a recent Italian study, which suggested COVID-19, if airborne, could attach itself to smog particles in cities with bad air pollution.

Joe Neufeld has been scrambling, like many funeral directors, to pick up bodies from city hospitals and morgues. He stopped doing “viewings” or wakes more than two weeks ago.

“What we are concerned about is the virus,” Neufeld said. “We don’t know enough about it. We’re assuming the virus is still active on the deceased’s body.”

Neufeld said his workers spray special disinfectant on the corpses and also wrap the remains in double body bags, to prevent leakage of fluids.

Meantime, in Brooklyn, PIX11 observed morticians in masks move one person’s remains out of the Utica Avenue funeral home Thursday afternoon, a hearse taking it away.