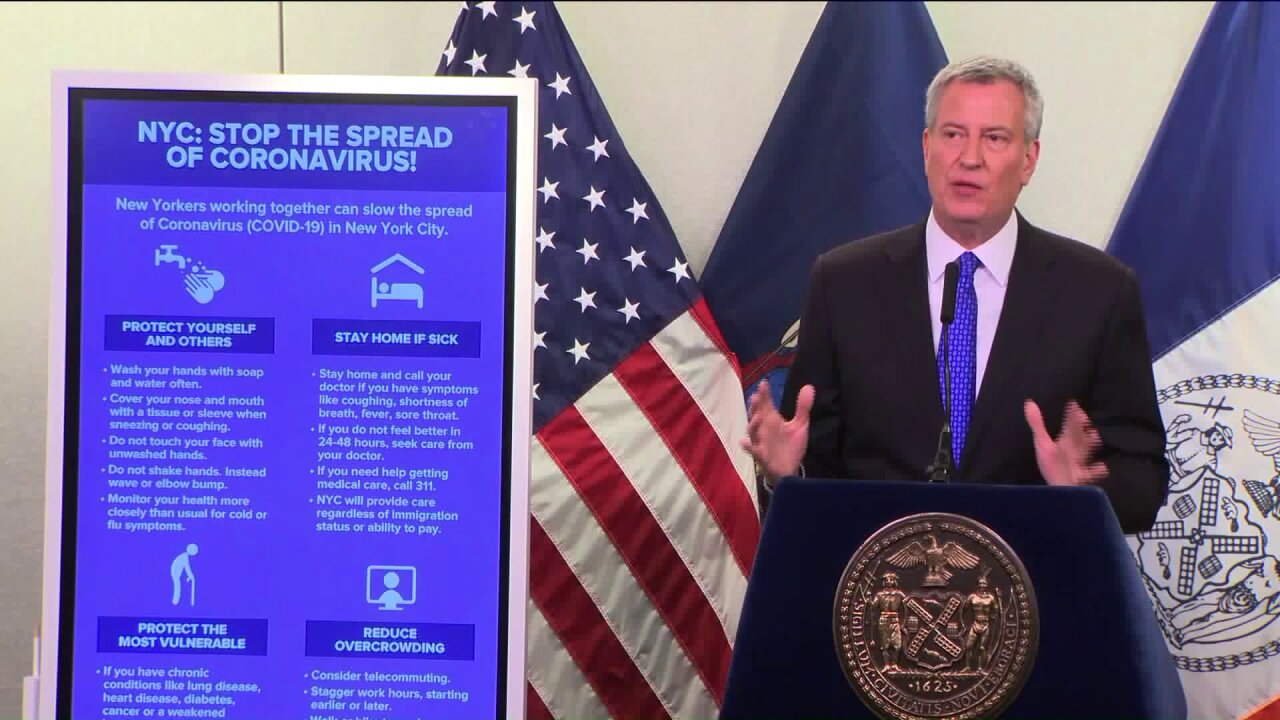 Of the new COVID-19 cases, two were in Brooklyn, one is in Queens, there are two more in the Bronx and two more in Manhattan, including Port Authority Executive Director Rick Cotton, who is currently under quarantine at home.

A 7-year-old girl in the Bronx tested positive for COVID-19. She is a student at Westchester Torah Academy and had no preexisting conditions. She is doing well with minimal symptoms and quarantined at home. Her family has tested negative.

A 68-year-old man in Brooklyn who recently traveled, but not to the highly impacted areas, tested positive. He has both diabetes and heart disease. His girlfriend and a son with symptoms are under mandatory quarantined.

A 22-year-old Brooklyn man also tested positive and was taken to the hospital. He recently traveled, but not to highly impacted areas. According to de Blasio, the man vapes, which may be why he's being closely monitored. His sister and mother are both quarantined.

A 75-year-old man from Queens developed a fever and pneumonia. He has a preexisting condition of diabetes and is critically ill at the hospital. De Blasio said officials are "very, very worried" about him. His wife is asymptomatic and quarantined.

As of Monday afternoon, 205 tests came back negative, with 59 new tests conducted since Sunday, the mayor said. There 86 pending tests.

De Blasio elaborated that most people who are under 50 and healthy will be OK. Those most vulnerable are people over 50 and those with pre-existing health conditions such as health disease, lung disease, cancer and diabetes.

Twenty-four people are under mandatory quarantine, while 2,019 people are in voluntary isolation, de Blasio said.

De Blasio advised New Yorkers to walk, bike or telecommute to work. "If the train is packed and you can wait for the next one, do so." Staggering commuters would hopefully prevent the spread, according the the mayor.

If a student or staff member at a school tested positive, de Blasio said that the school will be briefly closed down to conduct a deep cleaning. "We want to keep those closures minimal." The city is also preparing for the chance of remote learning, but de Blasio hopes that could be avoided.

For students who receive meals through school, de Blasio said officials are working on a plan.

De Blasio announced there will be no international public school trips through the school year, and nurses will be added to all public schools. Regular spot checks will also be conducted to make sure schools have proper and adequate supplies.

Over the weekend, Gov. Andrew Cuomo and de Blasio urged New Yorkers to stay away from crowded places, including workspaces and public transportation, as the number of coronavirus cases continues to climb.

Cuomo declared a state of emergency on Saturday, which allows expedited purchasing and hiring to assist in combating the virus outbreak.

New Yorkers who want information and regular updates on the sickness should text COVID to 692-692. Over 20,000 New Yorkers have signed up for alerts, according to de Blasio.