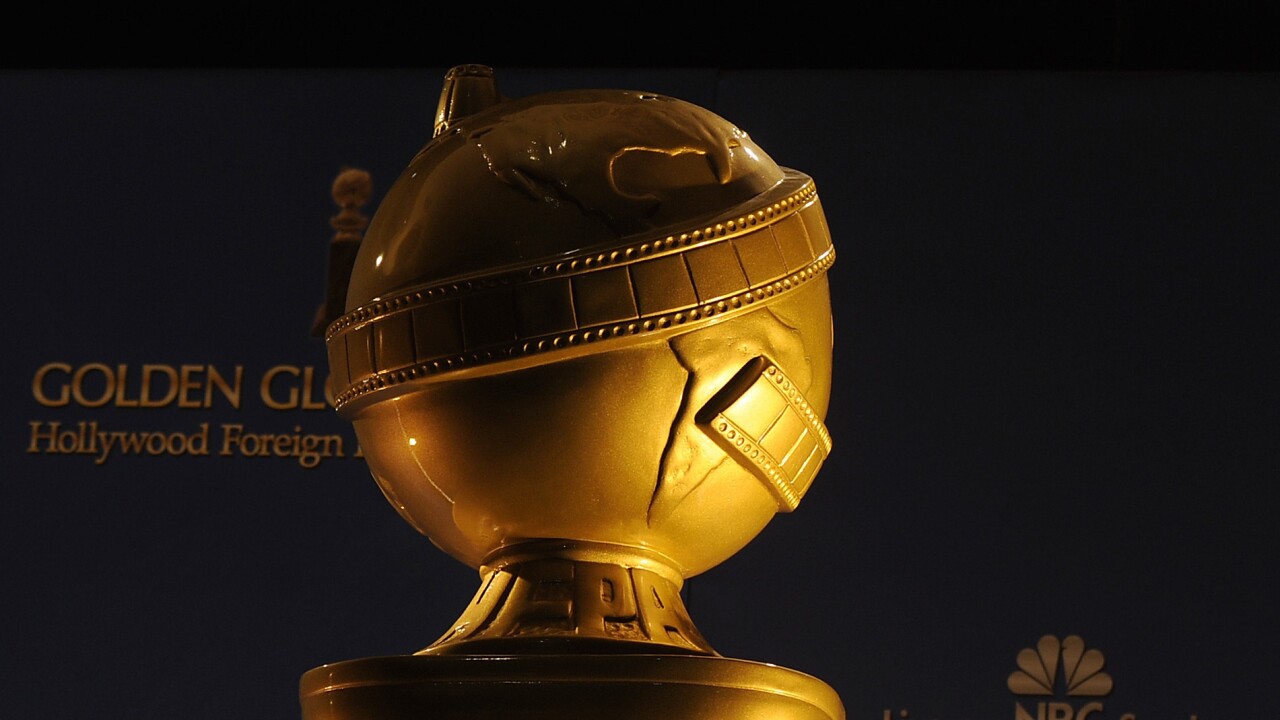 "1917" took the Golden Globe home for best motion picture - drama, while Quentin Tarantino's "Once Upon a Time in Hollywood" took the top film prize in the musical or comedy category.

Renée Zellweger won a best actress Globe for stepping into Judy Garland's ruby slippers in the biopic "Judy," while Joaquin Phoenix won the best actor in a motion picture (drama) trophy for putting on the "Joker" makeup in an unforgettable role.

As for the comedy/musical category, rapper and actress Awkwafina made history as the first performer of Asian descent to win a Golden Globe in a lead actress film category, for her role in "The Farewell."

Taron Egerton won the Golden Globe for best actor in a musical or comedy for his portrayal of pop music icon Elton John in "Rocketman."

Over on the television side of things, “Succession” has won the Golden Globe for best dramatic series.

The HBO drama created by Jesse Armstrong that chronicles rivalries and relationships in a family of media magnates wins the Golden Globe for its second season.

It beat out previous Golden Globe winners “Big Little Lies” and “The Crown.”

Colman won best actress in a TV drama series for her work on the Netflix series. Her predecessor in the part Claire Foy won the same award for the show’s first season in 2017.

She paused and wondered what to say moments later.

“I’m a bit boozy, I didn’t think this was going to happen,” Colman said.

Colman won a Globe last year for the film “The Favourite” before winning an Academy Award for the same role. She won her first Globe in 2017 for her lead role in the series “The Night Manager.”

Sam Mendes won the Golden Globe for best director of a film for his World War I epic “1917.”

Mendes also co-wrote the film, which was made to appear as though it takes place in a single take and is based in part on the story of his grandfather. He thanked “the great Roger Deakins,” the cinematographer with whom he collaborated to create the seamless film.

Mendes previously won a Golden Globe as best director for “American Beauty” in 2000, then went on to win an Academy Award.

He and Deakins are both likely to get Oscar nominations for “1917.”

The groundbreaking class satire “Parasite” is the winner of the Golden Globe Award for best foreign language film.

Director Bong Joon Ho’s movie has been one of the year’s most acclaimed films, in May becoming the first Korean film to win the top prize at the Cannes Film Festival.

The film is about a family of hustlers who insert themselves in the lives of a wealthy family. It is ineligible to compete in the Globes’ two best picture categories, but is considered a strong candidate for a best film Oscar nomination later this month.

Bong spoke out for foreign films in his acceptance.

“Once you overcome the 1-inch-tall barrier of subtitles, you will experience so many more amazing films,” the director said through a translator.

The Golden Globe for best actress in a limited series or movie made for TV went to Michelle Williams, who delivered a pointed acceptance speech about the upcoming U.S. elections and women's rights.

It’s the second Golden Globe in six nominations for Williams.

She won it for playing Gwen Verdon, the dancer and collaborator with choreographer and director Bob Fosse whose relationship with him was the basis of the FX show “Fosse/Verdon."

In a night that was mostly lacking in political talk despite increasing tensions with Iran, Williams spoke out for women and abortion rights during her acceptance speech.

She said she could not have had her career without employing “a woman’s right to choose. To choose when to have my children, and with whom.”

“When it’s time to vote, please do so in your own self-interest,” she said later in her speech. It’s what men have been doing for years.”

Brad Pitt was back on top at the Golden Globes.

Pitt won his first acting Golden Globe since 1996 for with his best supporting actor in a film trophy for “Once Upon a Time … in Hollywood.”

Pitt won in a star-studded category that also included nominees Tom Hanks, Anthony Hopkins, Al Pacino and Joe Pesci. Pitt said the other nominees “were like gods to me.”

He may now be bound for his sixth Oscar nomination for acting.

The first Golden Globe of the night was the kind of surprise that is typical of the show: Ramy Youssef won best actor in a TV comedy for “Ramy.”

“I know you guys haven’t seen my show,” Youssef said as he accepted the award. “Everyone’s like, is this an editor?”

Youssef was considered a longshot in a group of nominees that included Douglas, Bill Hader and Paul Rudd.

The 28-year-old Youseff plays a millennial American Muslim from an Egyptian family grappling with tradition and modernity in a divided New Jersey community.

“I’d like to thank my God,” he said as he received the award.

He wins for the first season of the Hulu series, which has been renewed for a second.

Phoebe Waller-Bridge is continuing her awards dominance, winning the Golden Globe for best actress in a TV comedy for her role on “Fleabag.”

Waller-Bridge take her first Golden Globe for her role on the Amazon series she created, to go with the acting Emmy she won in September along with Emmys for best TV comedy and for her writing.

With the win she unseats Rachel Brosnahan of “The Marvelous Mrs. Maisel,” who took the Globe for the previous two years.

The actress praised her co-star, Andrew Scott, who she said could have chemistry with a pebble.

“I love being Andrew's pebble in this,” Waller-Bridge said as Scott smiled broadly in the audience.

Creator and star Phoebe Waller-Bridge won best actress in a TV comedy earlier in the evening.

The Amazon show based on a one-woman show performed by Waller-Bridge follows a misanthropic single woman in her relationships with men and family in London. It also stars Sian Clifford and Olivia Colman.

The second season, for which the show won the Globe, features a burgeoning relationship between Waller-Bridge and a priest, played by Scott.

Waller-Bridge thanked Barack Obama for including the show among his favorites of the year, and admitted her feelings for the ex-president run strong.

“Thank you Barack Obama for putting you on my list,” Waller-Bridge said from the stage. “You’ve always been on mine. And if you don’t know what that means, watch season one of ‘Fleabag.’”

Veteran actor Brian Cox won the first Golden Globe of his long career for his work on “Succession.”

Cox took home the globe for best actor on a TV drama series for his portrayal of media magnate and family patriarch Logan Roy in the series about a wealthy family of media magnates in turmoil.

It was just the second Golden Globe nomination for the Scottish native Cox.

“Next year I will have been in this business for 60 years,” the 73-year-old Cox said as he accepted the award, joking that “I started when I was 2.”

Laura Dern won the Golden Globe for best supporting actress in a film for “Marriage Story.”

Dern’s victory on Sunday night gives her her fifth Golden Globe, but her first for her work in film — the previous four all came for roles in television.

It’s the first Golden Globe for both John and Taupin, who took the stage to accept it.

“It’s the first time I’ve ever won an award with him,” John said of his writing partner of five decades, who wrote the lyrics for most of his major hits. “We never won a Grammy, we never got anything together.”

They won in a category that was full of music superstars, including Taylor Swift and Beyoncé.

John paired with Tim Rice to win an Academy Award for “Can You Feel the Love Tonight” from the original “Lion King” in 1995.

Egerton soared past the stars to win the Golden Globe for best actor in a musical or comedy for playing Elton John in “Rocketman.”

Egerton’s win for the fantastical biopic was something of a shocker in a category that included Hollywood heavyweights Leonardo DiCaprio and Eddie Murphy.

It was the first Golden Globe in the first nomination for the Welsh actor and singer.

And it comes a year after Rami Malek won the Golden Globe for best actor in a drama for playing Queen singer Freddie Mercury, then went on to win an Academy Award for the role.

With no separate category for musicals or comedies as the Globes have, however, an Oscar nomination is by no means a lock for Egerton.

The HBO five-part series was created by Craig Mazin and starred Stellan Skarsgard, Emily Watson and Jared Harris, who accepted the award and dedicated it to the people who suffered during the 1986 nuclear disaster in the Soviet Union that is chronicled on the show.

“Chernobyl” beat out “Catch-22,” “Fosse/Verdon,” “The Loudest Voice” and “Unbelievable” to take the Globe.

The show won in the same category at the Emmy Awards in September.