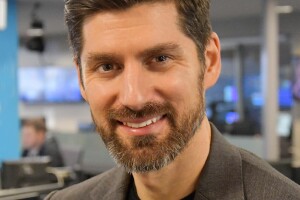 Ben Aaron is a features reporter on the PIX11 Morning News.

Ben joined joined the team as part of an expansion of the show in 2020 after a two-year run as co-host of the nationally syndicated Pickler & Ben with Kellie Pickler, for which he earned two Daytime Emmy Award nominations for “Best Host.”

Previously he spent 10 years at New York Live, where his segments as a feature reporter garnered four Emmy Awards.

Ben has also worked for EXTRA, Entertainment Tonight and the Today Show, and recently teamed up with his wife, Ginger Zee, chief meteorologist for Good Morning America, on an Emmy nominated home renovation show on the DIY Network called Renovation Realities.

Benf holds a Bachelor of Arts degree in media from Emerson College.