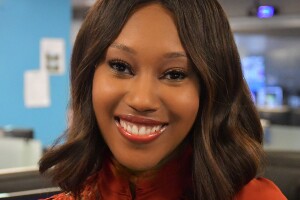 Stacy-Ann Gooden is the weekend meteorologist and weekday feature reporter for WPIX. As a Jamaican native who was raised in Brooklyn, she came to WPIX from NY1, where she served as the morning meteorologist.

In addition to providing local weather updates, Stacy-Ann has also presented national weather forecasts for NBC Weather Plus and CBS This Morning Saturday.

When it comes to delivering the forecast, Stacy-Ann is known for her upbeat personality and straightforward approach. “You don’t have to use a lot of scientific jargon to explain what’s going on outside. It’s about providing viewers with a forecast that anyone at any age can understand,” she explained.

Stacy-Ann has covered all types of weather events, including nor’easters, tropical cyclones and other types of weather phenomena. She was awarded a New York Press Club award for her work covering Superstorm Sandy.

Her passion for weather began when she majored in geoscience while at Mississippi State University. She also holds a Bachelor of Arts degree at St. John’s University.

When she’s not chasing storms, Stacy-Ann enjoys spending time with her family. You can get to know more about her husband and two children by checking out Stacy-Ann’s Weather Anchor Mama blog and YouTube channel.

She’s also had a recurring role as a news reporter on Fox’s hit series “The Following,” has appeared in NBC’s “The Mysteries of Laura and American Odyssey,” CBS All Access’ “Tell Me a Story,” as well as Netflix’s “The Punisher.”