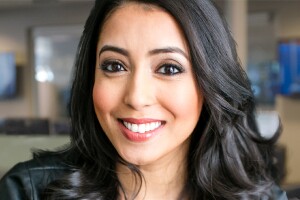 Narmeen Choudhury is an Emmy Award-winning journalist and reporter for the 5, 6 and 10 p.m. newscasts on WPIX. She joined the team as a general assignment reporter in 2011 and has contributed to the station regularly as a fill-in anchor.

Narmeen comes to WPIX from WTIC in Hartford, Conn., where she served as a reporter and fill-in anchor since 2007.

Narmeen’s television career began in Albany at Capital News 9, YNN. Her journalism chops were first earned working on the assignment desk, a role she says taught her the very foundation of how a newsroom operates. From there, she took on the role of writer and eventually became a producer.

Her first on-air role came in Syracuse at News10 Now, YNN. There, she worked as a multimedia journalist, shooting, editing and reporting daily.

From Syracuse to Hartford to New York City, Narmeen has covered a number of stories of national and international prominence. From politics to security and from education to natural disasters, she has covered it all. Most recently, Narmeen traveled to Bangladesh and covered the Rohingya refugee crisis.

Narmeen’s background as a Muslim Bangladeshi-American born in Queens has provided her with a proud background and made her a loud cheerleader from what she calls “the best borough.”

Narmeen was raised in Dutchess County, New York, and received her bachelor’s degree in journalism from Boston University, where she minored in international relations. During the summer preceding her senior year, Narmeen was honored with the opportunity to travel to Israel, West Bank and Gaza with her professor and mentor Bob Zelnick, who was a former ABC correspondent. There, she assisted Zelnick with setting up and gathering interviews on the Palestinian-Israeli conflict. This experience came just as the second Intifada was beginning in the area.

Narmeen lives in Manhattan with her daughter and husband.