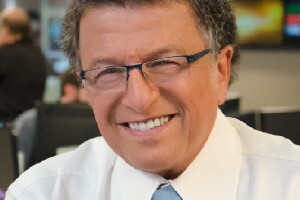 New York’s most popular TV weatherman, Mr. G, began his career as a school teacher at Albert Einstein Intermediate School in the Bronx. While a teacher, he created New York City school system’s first computerized weather program for use by children and their teachers. After teaching in public school for a decade, Mr. G was recruited right out of the classroom to become a TV weatherman at New York’s WCBS-TV in 1977.

Mr. G joined WPIX as the weekday weatherman in September 1993, where he has won five Emmy Awards and an Edward R. Murrow Award. In 2008, Mike Wallace presented the Friar’s Club Life Time Achievement Award to Mr. G. In addition, PIX News at 10 has been named Best Newscast by numerous prestigious outlets, including the New York State Associated Press Broadcasters Association and the New York Press Club.

An ardent supporter of education, Mr. G is very involved in working with students. To date, he has visited over 500 schools, especially lower income districts, where he speaks in classrooms (not just about weather, but motivationally as well) and tries to visit at least one school per week when classes are in session.

Every year since its inception, Mr. G has participated in New York City’s “Principal for a Day” program, declaring that day “homework and test-free” and always gets a standing ovation! In addition, June 30, 1993 was proclaimed “Mr. G day” in the Bronx for his motivational work with children. Mr. G is a board member for the R Baby Foundation and works to improve pediatric care in emergency rooms in the tri-state area.

Mr. G continues his series of lectures as “Professional in Residence” at his alma mater Hofstra University, where he speaks on radio and television broadcasting. Mr. G was born in Brooklyn and raised in Queens where he attended P.S. 201 and J.H.S. 218. He graduated from Francis Lewis High School and went on to Hofstra University in Long Island and earned a Bachelor of Arts degree in History in 1967. He received a Master of Arts degree in Secondary Education from Hofstra and pursued doctoral studies at Yeshiva University.

When he is not forecasting or involved in charitable endeavors, Mr. G can often be seen running in Central Park, and has run 34 New York City Marathons. An avid runner, he has run over 75,000 miles — or three times around the planet — and is part of a unique group of runners to accomplish that feat.