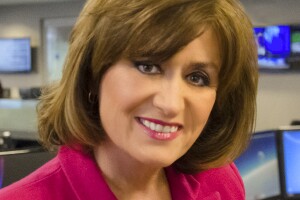 Mary Murphy is an award-winning TV reporter and Facebook host from Queens.

Mary has spent her entire broadcasting career in her hometown. She is known for her aggressive pursuit of the facts, along with her ability to connect with interview subjects. Her in-depth journalism has earned her thousands of followers on Facebook and Instagram.

Mary has broken big stories for WPIX, and in April 2020 won her 30th Emmy award. It was for continuing coverage of The Junior Files. Mary had filed many exclusive reports connected to the Lesandro “Junior” Guzman-Feliz investigation, starting with the arrests of Trinitarios gang suspects in the bodega murder of the 15-year-old in June 2018.

In December 2017, Mary revealed a faulty pipe bomb was used by an accused terrorist beneath the Port Authority Bus Terminal and was also first to report that the 2017 Halloween truck attack on bicyclists in lower Manhattan was an act of terror.

For her work in television journalism, Mary has also received an Edward R. Murrow for writing and many first-place prizes from the Associated Press. She has been at the forefront of coverage on the local and national opioid crisis, winning four Emmys at WPIX for reporting on the heroin/fentanyl public health emergency. The Drug Enforcement Administration has written a letter of commendation to Mary for a decade of reporting on the opioid crisis and the Suffolk County Emergency Services Division uses some of her reports in training.

During her time at WPIX, Mary has anchored coverage of the 9/11 terror attacks, traveled town to town during Superstorm Sandy and did live coverage from Vatican City when Pope Francis was elected in 2013. That’s the same year that Mary launched her “Mary Murphy Mystery” segment, which looks at unsolved crimes and missing persons cases.

Mary has worked at WPIX during two different phases of her career. She spent five years at the station in the 1980s, working her way up from production assistant to reporter. During this initial phase at WPIX, Mary produced some of the first local TV stories on the AIDS crisis and was out on the streets covering the violence associated with the crack cocaine epidemic.

In 1986, CBS 2 hired Mary as a general assignment correspondent. She covered breaking news there for seven years, including months of coverage associated with the assassination of NYPD Officer Edward Byrne. Mary was the first New York television reporter to air the confession tapes of the suspects.

She reported live during the truck bombing of One World Trade Center in 1993. She won Emmy awards at CBS 2 for reporting on the John Gotti and Joel Steinberg trials.

Mary returned to WPIX in 1993, where she was given opportunities to anchor, produce documentaries and continue to break stories. In 1994, she interviewed the real people behind the Oscar-winning film “Schindler’s List.” The project was honored with a national award from the American Women in Radio and Television.

In 1995, while six months pregnant, Mary covered the visit of Pope John Paul II (now a saint!) to New Jersey and New York. John Paul tapped Mary’s PIX 11 microphone, when she asked him a question, and that’s a special memory. She covered his mass at Giants Stadium in the pouring rain.

In 1996, Mary responded to the crash of TWA Flight 800 off Center Moriches, Long Island. 230 passengers and crew members bound for Paris from JFK perished. For years, there was intense debate about the cause. In July 2001, Mary was the lead reporter on the Emmy-winning newscast that marked the fifth anniversary of the disaster.

In 2006, shortly before the fifth anniversary of 9/11, Mary visited a field in County Cork, Ireland, where a New York-based nurse had planted 343 trees in honor of the firefighters who gave their lives responding to the Sept. 11 terror attacks.

On Sunday, May 1, 2011, Mary was in her pajamas on a Sunday night, when she received an email that President Obama was going to announce the death of the “Most Wanted” terrorist in the world, Osama bin Laden. Mary quickly changed, went into work, and landed on the lawn of retired firefighter, Bob Beckwith, at 4:30 a.m.

Beckwith had stood with then-President George W. Bush on top of a demolished fire truck, three days after 9/11, when the president declared the terrorists who knocked down the towers would be hearing from the United States very soon. Weeks later, our War on Terror was launched in Afghanistan.

Mary was thrilled on Jan. 25, 2015, when she received an email from Pennsylvania about one of her Mystery segments from the year before. The e-mail led to an emotionally powerful reunion between a biological mother and the child she had left behind in Brooklyn 38 years before.

Outside of work, Mary’s passions are movies and tennis.

Mary is grateful for the opportunities journalism has brought her to see the world. And she identifies with many people who, like her, came from ordinary backgrounds — but witnessed extraordinary things.